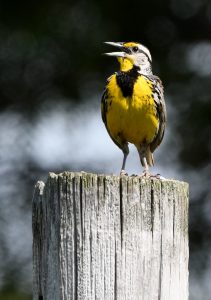 These birds are the tell-tale sign of spring in the tallgrass prairie. They are a staple of spring as the male Western Meadowlarks begin the breeding season in March or April. They prepare and stake out nesting sites as the females won’t migrate for a few more weeks.

The Meadowlark is very distinctive whether it’s Western or Eastern. They have a bright yellow throat and chest with a black V on their chest like a collar. Their wings have a beautiful brown pattern. According to The Cornell Lab, “Meriwether Lewis was the first to point out the subtle differences . . . the tail and bill shapes as well as the song of the Western Meadowlark differed” from the Eastern Meadowlark.

While some of their range does overlap, they will fight for their territory. They refuse to share and can tell the difference between species. One way they do this is because their songs are so different. Their songs are what declare their hold on territory as they sing from atop fence posts or other high spots.

The Eastern Meadowlark will eat the harmful insects but will leave the crops alone. Not many birds do this so it is important to keep them around. They are a species of steep decline as more and more prairie land in the eastern United States is turned into agricultural land. The Western Meadowlark however is still a low conservation risk.

One thing you can do to help increase the population of the Eastern Meadowlark is to hold off on mowing grasslands. According to the Birdwatching website, they nest during June and July and one of their favorite places is alfalfa fields. If they are mowed early, it can destroy nests and then there’s no chance for those babies. Meadowlarks are relatively quiet during breeding and nesting but once they start singing again, the first brood has probably left the nest. The Eastern Meadowlark will generally have one or two broods a year.

The Eastern and Western Meadowlarks may look extremely similar but they still have individual needs. The Eastern Meadowlark is a great bird for crops as they eat the harmful insects but not the crops. If you want to go looking for the meadowlarks, look on fence posts on country roads. Drive slowly on backroads with your windows down to hear them sing their beautiful songs.