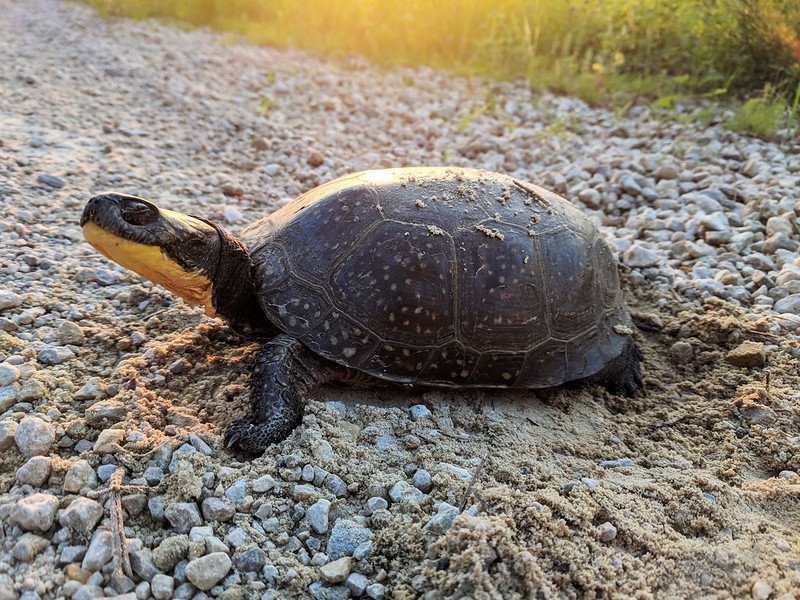 Blanding’s Turtle or Emydoidea blandingii is threatened in Iowa and is a Species of Greatest Conservation Need according to Amphibians and Reptiles of Iowa’s website. This means it is illegal to kill or collect these turtles in Iowa. The Iowa DNR would appreciate the report of these turtles when they are seen.

These turtles are less aquatic than the other turtles of Iowa. They like to live in shallow marshes, ponds or wetlands. Wetland habitat has been severely declining for many years now. This is part of the reason the Blanding’s turtle is a threatened species. They are a very distinctive species with a yellow chin and underside. They grow to be between 5 and 8 inches long. They also tend to have yellow dots and other yellow markings.

They like for the body of water to have plants floating around and to have no current. They are also attracted to sandy soil. Some of our wetlands would be the perfect place to go look but there hasn’t been a Blanding’s Turtle seen in Dickinson county in a while. They have been seen in Osceola county though.

The breeding season for Blanding’s Turtle begins in April which is coming up sooner than we think. They breed April through May. Their active season also beings in April. They can be seen basking in the sun. They like to bask on large logs and muskrat lodges away from the shore.

During courtship, the male will chase the female through the water so if you see some splashing, that may be the turtles. After breeding season, the females will dig a nest to lay their eggs in. If they can’t find a suitable marsh habitat to lay their eggs, some females will lay their eggs on the side of the road. They lay about 10 eggs and then cover the nest so thoroughly it doesn’t even look like there’s anything there. The eggs will hatch in about 60 days. Even though the eggs are buried, they’re not exactly safe. Raccoons and skunks will dig up the eggs and eat them.

The mother will travel from marsh to marsh to lay her eggs. Once she has laid her eggs, she travels back to the marsh she came from and once the eggs hatch, the babies follow the path back to the marsh the mother came from. It’s not an easy life for the baby turtles because following the path of the mother, possibly hatching on the side of the road, plus the predators leads to a low survival rate.

Blanding’s Turtles have a hinge on the bottom of their shells. When they pull their head and front legs in, they can also pull their shell shut. Instead of biting and fighting back, they would rather lock themselves in their shells and wait for the danger to pass. They will also take the opportunity to dive into the water and they won’t come back up for a very long time.

The turtles will eat many different animals. They seem to really like crayfish, earthworms and snails. They also will eat snails, fish and frogs. They eat many of those aquatic or semi-aquatic animals that live in places like marshes and bogs. They will also eat plants like berries that are found nearby. Being more terrestrial than aquatic, they will eat plant materials as well.

These turtles are endangered in Iowa and need to have more habitat to thrive. The marshlands of Iowa have largely been drained for agricultural use. But there is also an initiative through the USDA called the Wetlands Reserve Program where landowners voluntarily offer to protect, restore or enhance the wetlands on their property. The USDA Natural Resources Conservation Service will in exchange provide technical and financial support to these landowners. This will only help the Blanding’s Turtle populations to increase.