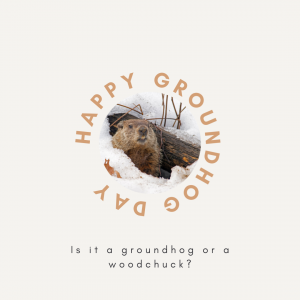 Today is Groundhog Day!  Phil saw his shadow so six more weeks of winter it is. But did you know, Punxsutawney Phil has his own club? There is a whole club plus an inner circle who support Phil and throw a party every year for Groundhog Day. This year it will be virtual but they still plan on having one.

But you might wonder, are groundhogs and woodchucks the same animal? The answer is yes, and we have them here in Iowa. Groundhogs can climb trees, swim but especially like to dig burrows and tunnels. While they aren’t very big, they can do a lot of damage so many gardeners and farmers don’t like them very much. They can be very destructive.

Groundhogs hibernate during the winter starting in about October and then come out pretty early in February. Once they stop hibernating, they eat to regain strength and then move on to breeding season. This is one reason some people think groundhogs can predict when spring will come. If spring comes earlier, they have a better chance at breeding.

Groundhogs have four to six babies who nurse for about six weeks then are weaned and live on their own. If babies are born too late in the season, they don’t have enough time to put on the weight to hibernate so the timing of having groundhog babies is important. This is another reason people think groundhogs can predict spring’s arrival.

Groundhogs are also called whistle-pigs. They are called this because they make a whistling sound sometimes among other sounds. They use these sounds to communicate with one another. But they are very solitary animals. The only time they find other groundhogs is during breeding season. Other than that, they like to dig their burrows and hang out alone.

One thing groundhogs eat are dandelions but they also like clover and other grasses that are native to Iowa. During the spring, summer, and fall, these can be found in abundance especially in restored areas. Groundhogs like to hang out at the edges of woodlands where it opens up onto prairie or grasslands. This means they can be found on the edges of fields, water sources or even roads. This is why they can be a nuisance to farmers but if you think about it, their burrows can help turn over the soil and their poop will be full of seeds.

These guys are famous for Groundhog Day but they are in numerous places. And while it may be sunny in Iowa on Groundhog Day, it may not be sunny in Pennsylvania so does that mean the groundhogs in Iowa will come out but Punxsutawney Phil will say six more weeks of winter? I’m not really sure but I think I’m going to follow Punxsutawney Phil, especially if he says spring will arrive soon.