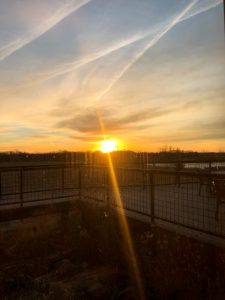 Do animals know when to celebrate New Year’s Eve or do they celebrate it whenever they want?

Well, animals probably don’t celebrate it at all but, they do follow environmental cues. An environmental cue is something like the days getting longer or the blooming of certain plants which are food sources.

Animals have always had these environmental cues that they follow. Scientists are still studying many of them but they mainly come down to the primary needs of animals. Food, water, air, and the ability to reproduce. Many animals move during the year and then return to the place they were born to have their babies. There are exceptions but how do salmon, for example, know when it’s time to travel upstream to lay their eggs? Or how do the birds who migrate know when it’s time to come back to Iowa and lay their eggs?

Many times, it comes down to food and temperature. As the days get longer, the weather gets warmer and the food starts growing. Without these environmental cues, the birds wouldn’t migrate back to their native summer homes.

Just like we know spring will be here soon once the robins and other birds start to return, they know when to return because of the environment. Animals are very in tune with the natural world and sometimes humans can interfere with that. If there are other food sources in cities or places with a lot of people, maybe those birds who normally migrate will stop migrating, or those foxes out on the farm will continually eat the farmer’s chickens because it’s an easy source of food rather than having to wander far and wide to find dinner.

While this doesn’t always happen because evolutionary cues have a pretty strong pull on an animal’s behavior, it is possible. But to be so in tune with nature and have such strong evolutionary cues help animals to survive and thrive. So while animals probably don’t celebrate New Year’s Eve, they do have their own times they celebrate in a way. I like to think animals are very happy once the weather starts to warm up. Birds sing more and everything is green again with so many different food sources.

But that doesn’t have to stop humans from celebrating on New Year’s Eve. We could all use a celebration right now so let’s celebrate the New Year and celebrate all of the fresh opportunities to explore nature in the coming year.