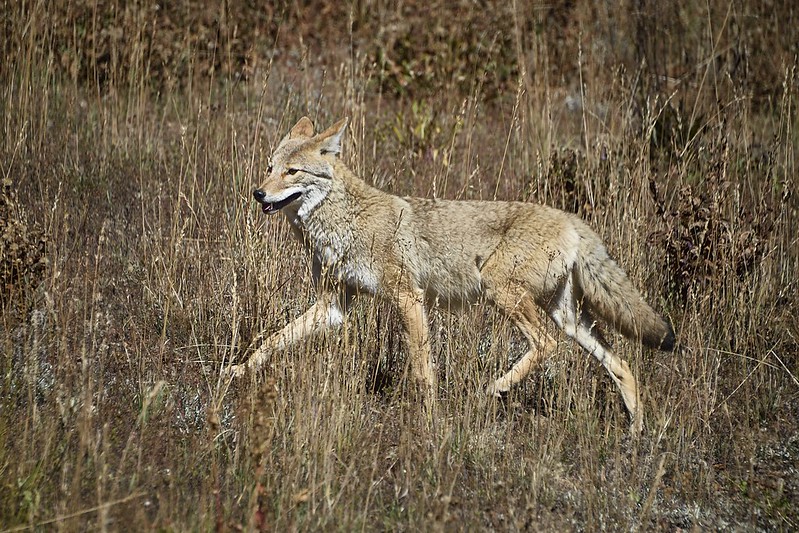 Coyote’s original natural habitat was around the Great Plains but has continually grown. Being native to the great plains, it wouldn’t have been uncommon for there to be coyotes who wandered into Iowa as it’s very close and Iowa was once full of prairie grasses which are also good for hunting. Now, the coyote can be found across the United States.

The coyote is a very smart and adaptable animal. Their instincts and adaptivity are astounding. It allows them to thrive in and around cities while also thriving in their natural habitat on the plains and in forests.

During the winter, coyotes pair off to mate. These pairs then raise their pups together and act as a family unit. Not many animals do this, but coyotes are an exception. Coyotes can have between four and six pups who are raised by both parents. They are born in the spring and then grow and live together until late summer. Some female coyotes will even stay in the same general area as their mothers.

In the 1930s, the U.S. Government gave a lab money to help them create a way to get rid of coyotes. They tried really hard to poison the coyotes and between 1947 and 1956, they killed about 6.5 million coyotes in the west according to a National Geographic article. They poisoned bait and set it out for the coyotes. Little did they know, the bait they were setting out, wasn’t a majority of what the coyotes ate. There had been no scientific studies done on coyotes before this campaign, so the scientists didn’t know anything about them. They started doing scientific research and found the coyotes ate small rodents like mice, rabbits, and fruits and vegetables. They weren’t as big of a threat to the large animals as had been proposed.

Even still, the persecution didn’t stop. But the coyotes had evolved and adapted to survive this type of campaign. They evolved from being able to only survive as pack animals and could survive as singles or pairs. This helped because when they were being hunted, it would be much harder to find singles or pairs as opposed to packs. They would also be able to hide their pups better if they were moving and hiding in pairs. Due to this, their natural range expanded as they moved to escape persecution.

Their litter numbers would also increase. They would go from four to six all the way to 12 or 16 pups. This allowed the population to sustain itself even when 6.5 million coyotes had been hunted in a 9-year span. According to a National Geographic article, they use their howls and yipping as a kind of census. If there isn’t a response, there is an autogenic response triggered and they will produce larger litters of pups.

It wasn’t until the 1960s and Nixon’s presidency that the view of the coyote began to change. Nixon put policies in place to stop the use of the poison on the coyote and there were pro-coyote films and cartoons being produced. One big one being Wile E. Coyote by the Warner Brothers Studios.

While this started to change the view of coyotes in America, it hasn’t stopped the hunting. Coyotes today are still hunted but their populations will continue to be strong. They have even entered cities to find food or a “safe” place from hunters. Sometimes they will just pass through the cities instead of stay but they might get small animals so be on the lookout if you’re near the edges of town.

Coyotes are considered nuisance animals by a lot of people because they will take down smaller livestock like sheep or goats but every animal plays a role in nature. There are food chains for a reason and a reason all animals are part of the ecosystem. Including humans. But coyotes are given a bad reputation. If you see one or suspect one is getting to your pets or livestock, there are things you can do but also remember, you may be in their natural range so they’re just living near you. There are bound to be problems but if you can learn to live as part of the food chain, it might not be that bad.