While we don’t have an animal ambassador named after John Lacey, he was still an important conservation figure who hailed from Iowa. 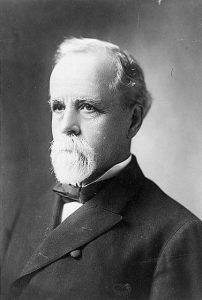 Lacey was born in 1841 in West Virginia. It wasn’t until 1855 his family moved to Iowa. They settled on the Des Moines River near Oskaloosa, IA. Here he worked on the family farm but attended school during the winter months. When the Civil War started, he enlisted and joined the Third Iowa Voluntary Infantry. After the Civil War and attaining the rank of major he returned to his home in Oskaloosa.

Here he began his law career. He married Martha Newell and opened his own law office but also served on the Iowa General Assembly from 1870 – 1872. After serving one term, he focused on his law career and family life. The couple had four children but only two survived past infancy.

Starting in 1888, Lacey was elected to the U.S. House of Representatives. He served one term but then was re-elected again in 1892. Here is where Lacey’s conservation career began.

Lacey was also the chair of the House Committee on Public Lands from 1894 – 1906. Here he was able to be a strong advocate for resource conservation on federally owned lands. Here he was able to gain other protections like a bison breeding ground in Yellowstone and the establishment of game preserves in Yellowstone. He was instrumental in the ideas of land management and scientific management.

Lacey’s biggest accomplishment was the passage of the Lacey Bird and Game Act of 1900. This made it illegal to transport wild animals or birds killed against state laws. It helped preserve the number of wild animals and birds so there was a better population of those species. It also changed the way market hunters were able to operate. Before they would be able to kill and transport any animal or bird, they wanted. They were especially fond of the snowy egret who was hunted for their feathers to be used as plumes. This law helped put an end to that trade.

Without John F. Lacey to take a stand in the House of Representatives, the Bird and Game Act of 1900 may have never been passed. Lacey hailed from Iowa and was such a strong advocate for conservation. Iowa is lucky to have had him live here.