Did you know that April is Global Astronomy Month?

When you look into the night sky, you can only see a small taste of what is actually out there. Stars, black holes, galaxies, comets, asteroids, meteors.

However, sometimes that world of astronomy can get confusing quick. So we decided it would be wise to define some of the rocky substances that are floating through outer space. 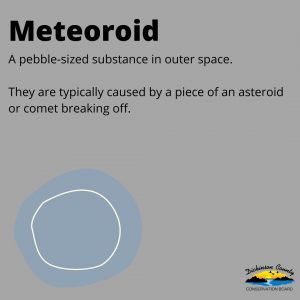 A meteoroid is a pebble-sized substance in outer space. Sometimes they are caused by a piece of an asteroid breaking off, and sometimes they come from comets. 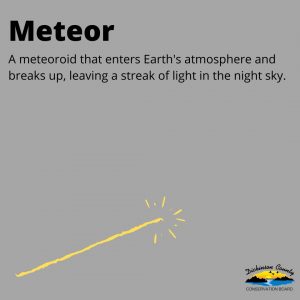 A meteor is a meteoroid that enters Earth's atmosphere and breaks up, leaving a streak of light in the night sky. They are also called falling stars or shooting stars. 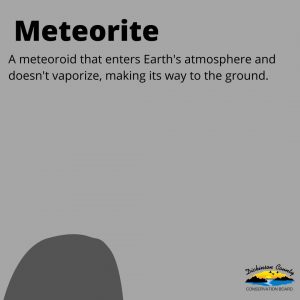 A meteorite is a meteoroid that enters Earth's atmosphere but doesn't completely break up so it makes to way to the ground.

These pieces of asteroids can give scientists lots of information about outer space and its long history. 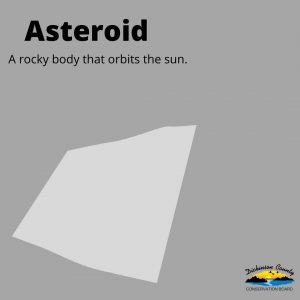 An asteroid is a rocky body that orbits the sun. Some asteroids are also made of clay or metal.

They are leftover particles from the creation of our solar system and can all look different. Some asteroids are hundreds of miles wide while some are as small as meteoroids. They are typically jagged and irregularly shaped.

Most asteroids are located in the asteroid belt between Mars and Jupiter. 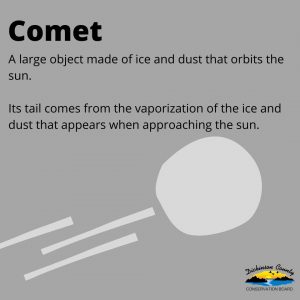 Comets also orbit the sun, like asteroids, but they are made out of ice and dust instead of rock.

Comets look similar to meteors sometimes, because they both leave streaks of light in the night sky. However, a comet's tail comes from the vaporized ice and dust that comes from its approach to the sun.

When you see a meteor, it is in the Earth's atmosphere. You can see comets that are far from Earth.

Most people think that only Saturn has rings. Some know that Uranus too, even though they often aren’t drawn in illustrations, has rings. However, they aren’t the only ones. Jupiter and Neptune also have rings. Even some moons, like Saturn’s moon Rhea, and asteroids can have rings. Let’s take a look at rings that exist END_OF_DOCUMENT_TOKEN_TO_BE_REPLACED

Pluto was first designated a planet in 1930 when it was discovered by Clyde W. Tombaugh at the Lowell Observatory in Flagstaff, AZ. The tiny planet is about two-thirds the diameter of Earth’s moon and most likely is made up of a rocky core surrounded by ice and coated with methane and nitrogen frost. It END_OF_DOCUMENT_TOKEN_TO_BE_REPLACED