Iowa has nine species of bats (you can read more about them here) and some of them hibernate while others migrate, and some migrate to hibernate.

Iowa's two most common bats, and those that you would find in Dickinson County, are the little brown bat (Myotis lucifugus) and the big brown bat (Eptesicus fuscus). Both of these bats hibernate through the winter.

Hibernation means that a bat's body slows down, including its metabolism, heart rate and breathing rate, so that it can survive a long time without food. A bat's heartrate will drop from 200-300 beats per minute to about 10 beats per minute, and it can go several minutes without breathing. They can stay in this state for up to a month in the winter, mixing that with periodic cycles of normal activity.

Places where bats hibernate is called a hibernacula.

Little brown bats hibernate in colonies of hundreds or thousands in abandoned buildings and caves, typically. They may migrate hundreds of miles to their winter hibernacula. 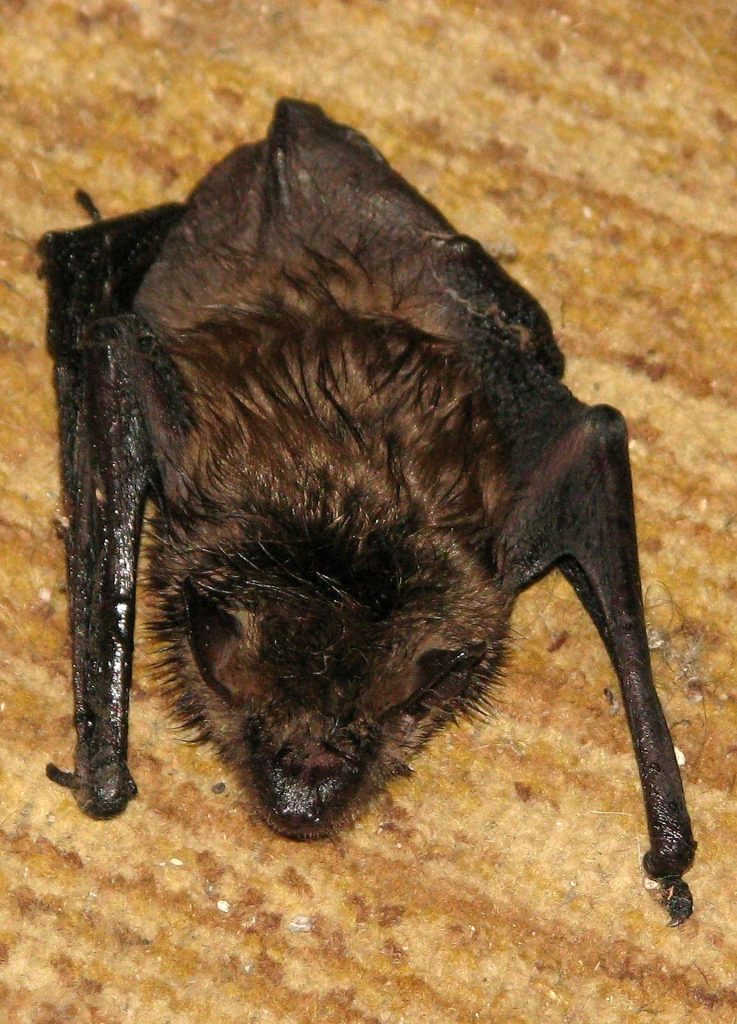 During hibernation, little brown bats can withstand a temperature change of up to 120 degrees Fahrenheit without suffering any damage, and they can spend up to six months in hibernation while waiting for insects to arrive once again.

Big brown bats may migrate to hibernacula or may not. They put on substantial weight in the fall in preparation for winter and find hibernacula such as caves, mines or abandoned buildings. They sometimes form clusters but also hibernate individually. 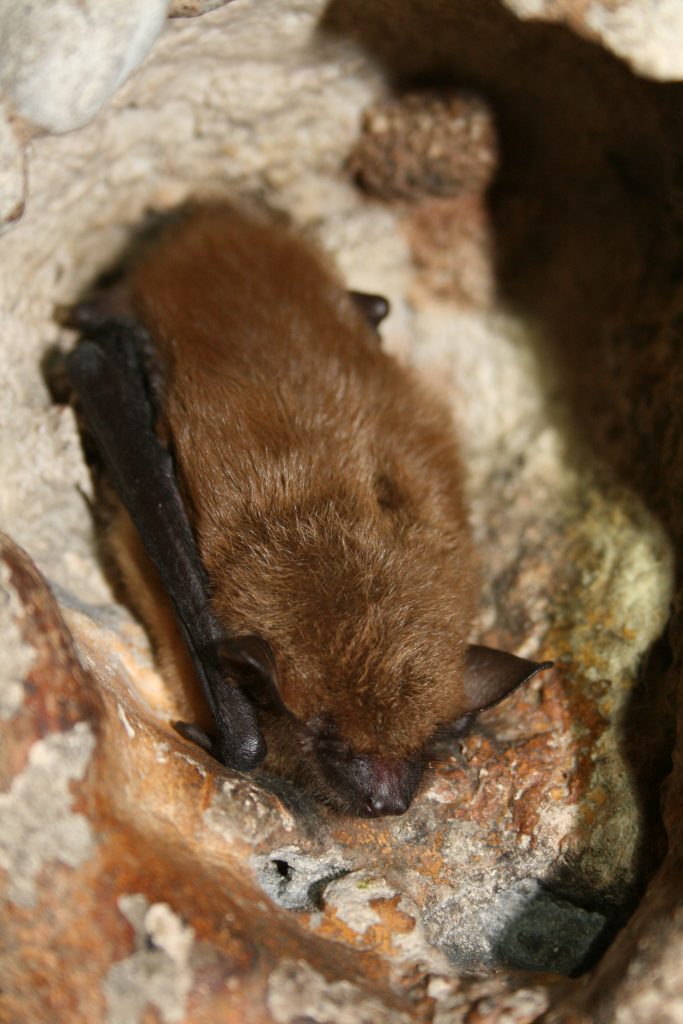 Six Iowa bats, including the little brown bat, are listed as species of greatest conservation need in Iowa. The Indiana and northern long-eared bat are threatened or endangered under the federal Endangered Species Act.

One of the threats against bats today has to do with hibernation --- white-nose syndrome. WNS is caused by a fungus that affect hibernating bat colonies, causing bats to wake up and be more active in the winter, which in turn uses up their fat stores in a season without many insects to eat. 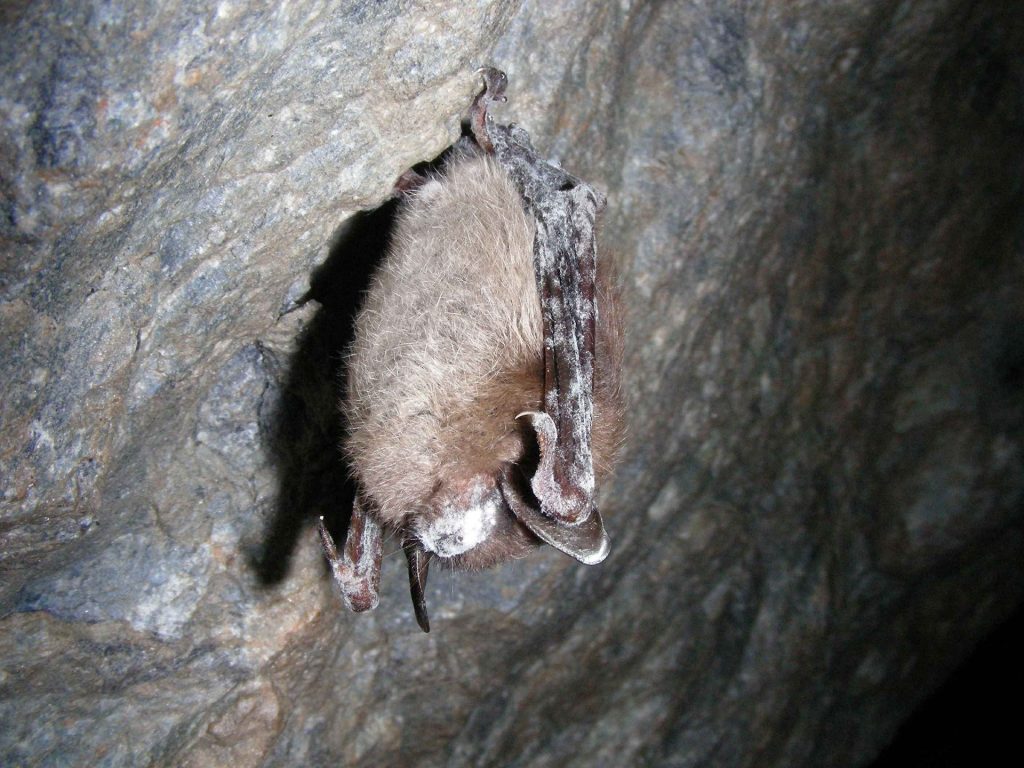 A hibernating bat with white-nose syndrome

WNS can be passed by humans if they come into contact with the fungus and spread it on clothing and footwear. Be sure to clean and disinfect clothing and fear before entering any caves or known bat habitats.

Migrating bats have also been found to be fatally impacted by wind turbines through direct contact or by pressure caused by spinning blades that causes a bat's lungs to fill with fluid as it flies near the blades. Research is ongoing in this area.

The common garter snake (Thamnophis sirtalis) is just that — common. They are a small snake, usually less than 3 feet, and are non-venomous. The snakes are found throughout Iowa and much of the U.S., as far south as the Gulf of Mexico. However common they are in the summertime, they quickly disappear as the END_OF_DOCUMENT_TOKEN_TO_BE_REPLACED

During the autumn season, you’ll see acorns and other nuts falling from trees as the trees get ready to go dormant — basically, sleep — during the winter. Many animals take advantage of this time and gather those nuts to eat during the winter, and you’ve most likely seen plenty of squirrels running around with END_OF_DOCUMENT_TOKEN_TO_BE_REPLACED

Pine siskins, purple finches, dark-eyed juncos, American tree sparrows — these Iowa winter birds are really only just a few of the birds that make winter a bit more fun in this cold state. 1. Red-breasted nuthatch Red-breasted nuthatches live year-round in many parts of the western United States and Canada, but they spent winter, END_OF_DOCUMENT_TOKEN_TO_BE_REPLACED

Bats can see about as well as humans. However, they are nocturnal — which means they are active at night — and think about how well you can see at night. (Read about nocturnal animals in Iowa.) Without a light, can you see a mosquito? You might feel it bite you, but you sure wouldn’t END_OF_DOCUMENT_TOKEN_TO_BE_REPLACED

The numbers of bees in the indoor beehive have gone down. But that’s pretty normal this time of year. It just means that our bees have entered winter mode and are getting ready to survive cold weather. Baby, it’s cold outside. As the weather cools down, a honeybee hive starts to change. One of the END_OF_DOCUMENT_TOKEN_TO_BE_REPLACED

I get odd looks when I tell people that I think bats are cute. This first summer that I worked at the Dickinson County Nature Center, we had a family bring in a little brown bat that they had found on their driveway. (If you find a bat on the ground, give us a call END_OF_DOCUMENT_TOKEN_TO_BE_REPLACED

The Okoboji osprey pair and their three grown chicks are gone for the season, last spotted about the second week of September before heading south. But where exactly are they going? And why do they leave? Where are they going? We’re not exactly sure. Although the osprey male that has habited the Dickinson County Nature Center END_OF_DOCUMENT_TOKEN_TO_BE_REPLACED