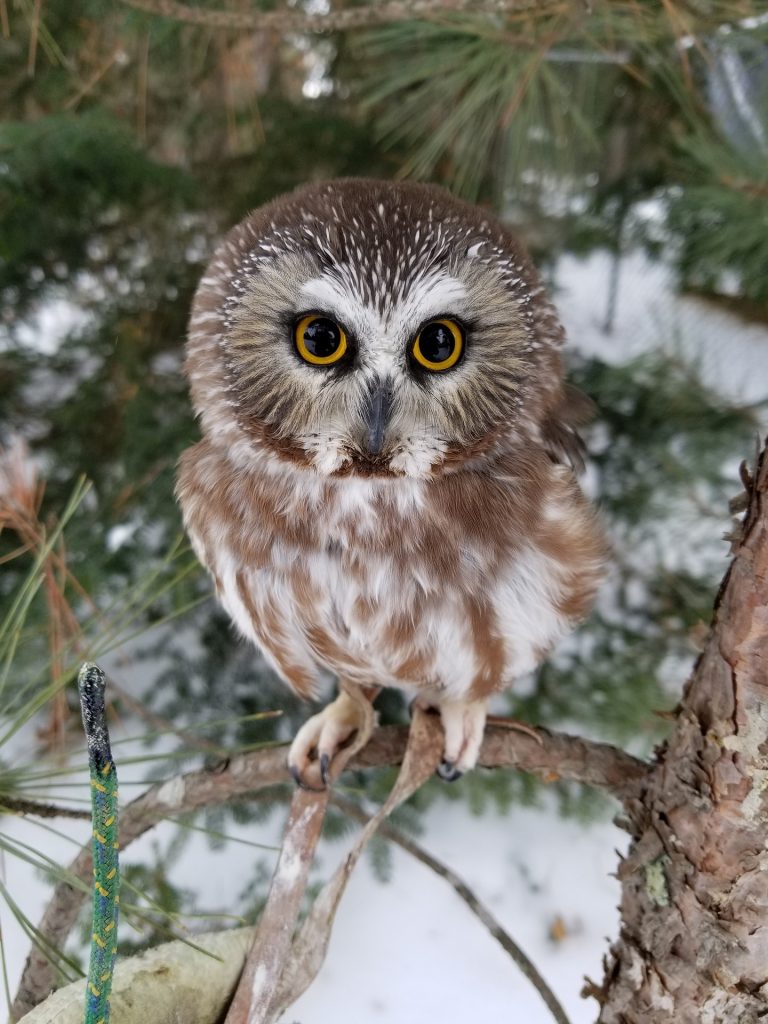 Great-horned owls may be the most well-known and most common owl in Iowa, but I don't think there's any disputing that the northern saw-whet owl is the cutest.

Only slightly heavier than a hairy woodpecker and about the size of a robin, the saw-whet owl (Aegolius acadicus) is tiny and adorable.

In addition to being small, saw-whet owls are also strictly nocturnal, which means they are almost never active at a time when humans would be able to see them.

However, you might hear their call --- too too too --- in a high-pitched tone January-May.

They are stealthy predators.

Northern saw-whet owls perch on low branches along the edges of the woods to hunt their prey, which ranges from small mammals to birds or even bats. Larger prey they may break up into two meals, and they will supplement their food with insects.

However, saw-whets are also the prey of larger raptors, including hawks and owls.

They may freeze their food for later.

Juvenile saw-whets have a light brown body and dark brown head, and after their first molt get their adult coloring with a mottled coloring and partially-white facial disk.

They have asymetrical ears.

Many owls have ears that are asymmetrical, but saw-whet owls have extremely asymmetrical ears. The right ear hole is higher and faces upward, while the left is low and faces downward. Using these differences, the saw-whet can triangulate sounds and detect where prey is even when it is incredibly dark out.

You may have noticed that as the seasons change, birds begin to look different. What was a bright eastern goldfinch in the spring becomes a duller hue in the winter. A duck that had vibrant breeding feathers earlier in the year now looks a little drab. That is because birds molt. Their feathers wear out END_OF_DOCUMENT_TOKEN_TO_BE_REPLACED

Everyone loves to feed the birds in winter. (Learn about one of Iowa’s winter birds: Dark-eyed junco) It helps the birds that are scavenging for food. It lets you get close to watch these fun, feathered friends. Bird watching is a good hobby to do from the warmth of your house on chilly days. You END_OF_DOCUMENT_TOKEN_TO_BE_REPLACED

Snowbirds are people that flee Iowa for warmer weather farther south. By farther south, we usually mean Florida, Texas or Arizona. However, for some residents of the far north, like dark-eyed juncos, Iowa is the warm haven to which they flock. As winter sets in, these pretty little sparrows migrate from their breeding grounds in END_OF_DOCUMENT_TOKEN_TO_BE_REPLACED

We are planning on redoing our landscaping, and a volunteer bush on the corner of the house needs to come out. However, my husband Snapchatted a picture to me of a robin, and she decided to make her nest right in the bush. Needless to say, that bush will not be going anywhere for the END_OF_DOCUMENT_TOKEN_TO_BE_REPLACED