Most people familiar with monarch butterflies know that they migrate to central Mexico to overwinter.

You can read in-depth how monarchs find their way here, but in general, they use their circadian rhythm to orient themselves with the direction of the sun and also use the earth's magnetic field to fly toward the equator. 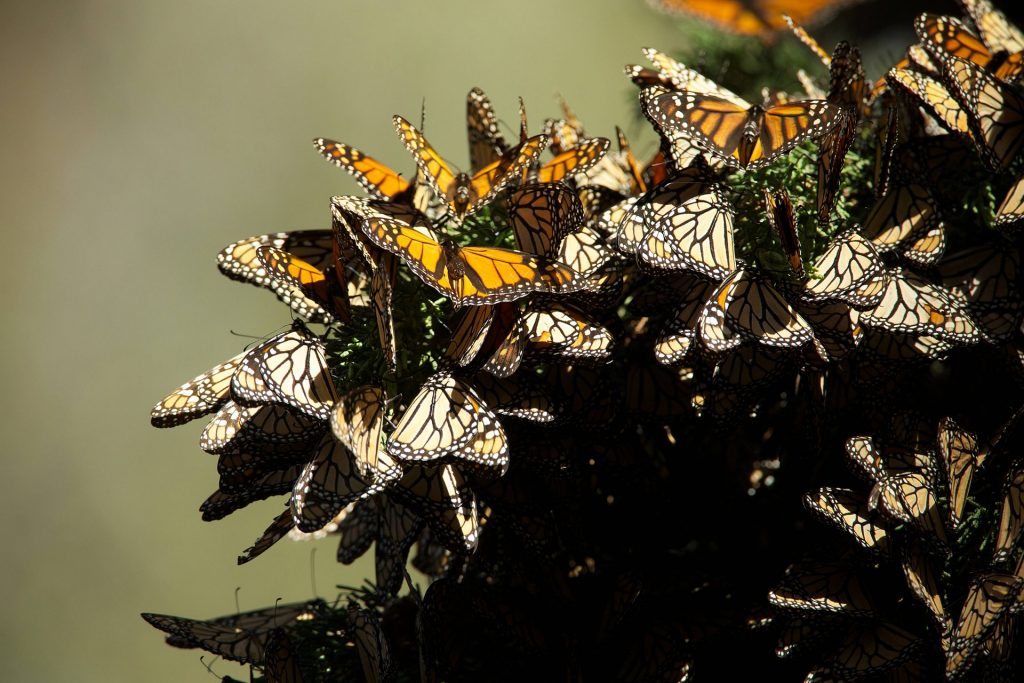 Monarch migration has not been well understood for long. It is was only in the 1970s that scientists finally tracked where monarchs were overwintering, following them to an area approximately 70 miles wide outside of Mexico City.

In the volcanic mountains, forests of fir trees, now protected by the Mexican government, were found to host the monarch butterflies in the winter. Oyamel firs are rare --- only 2 percent of the original forest remains --- and they only grow at high altitudes between 2,400 and 3,600 meters above sea level. Only 12 mountaintops have been found to host the rare habitat for monarchs.

This area seems to be perfect for monarch butterflies because it is both cool and moist, in a region that is otherwise arid during the winter. The oyamels create a microclimate where cloud cover provides consistent moisture. Plus, the cool temperatures allow the monarchs' metabolism to slow to conserve lipid reserves during the winter without causing the monarchs to freeze unless there is a stretch of bad weather.

Monarchs also cluster together on the oyamel trees to stay warm. Tens of thousands of monarchs can cluster on a single tree. The branches are generally tough enough to withstand the weight, but they do occasionally break.

During monarch tagging at Dee’s Bee & Butterfly Festival, taggers often get to choose whether they want to tag a male or a female monarch butterfly. Then the next question is, how do the staff helping with tagging know the difference? There are two very simple ways to tell apart a male and female monarch END_OF_DOCUMENT_TOKEN_TO_BE_REPLACED

In the monarch enclosure and in the wild, we have come across monarch butterflies that hatch with crumpled wings. That is a sign that the butterfly is infected with ophyrocystis elektroscirrha, or OE. As if these butterflies didn’t have enough to deal with — like excessive pesticide use, their lack of habitat and native food END_OF_DOCUMENT_TOKEN_TO_BE_REPLACED

It seems a little premature since there is snow on the ground and more in the forecast, but it’s the time of year that I start to think about planting my garden. One thing I’m really excited to plant in our landscaping are some native pollinator plants. When we moved to our house, it had END_OF_DOCUMENT_TOKEN_TO_BE_REPLACED

Those wonderful orange-and-black butterflies that we love so much. They fly overhead this time of year, and we know they are headed to their overwintering sites outside of Mexico City. But how do they get there? Plenty of studies have been done throughout the years to try to figure out how a brain the size END_OF_DOCUMENT_TOKEN_TO_BE_REPLACED