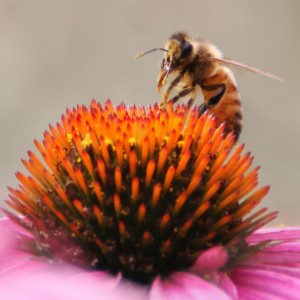 "Why does a honeybee die when it stings?"

That was a question I couldn't answer off the top of my head when a child asked me the other day while looking at the indoor beehive. The best thing to do when you don't know the answer --- look it up.

When a honeybee stings, its stinger gets stuck in the skin. Imagine trying to pull a screw out of a wall without a screwdriver. You just can't do it.

When the honeybee tries to escape, it breaks off from the stinger, leaving part of its abdomen and possibly its bowels behind. It just can't survive after that.

However, a honeybee's stinger doesn't stick in all creatures. It could stick a large insect, and the honeybee could pull out its stinger and continue on its way. However, for people and other mammals with thick skin, the honeybee can't retrieve its stinger.

In contrast, a queen’s stinger is smooth and can be used multiple times, but a queen uses it exclusively to battle other queens.

Drones do not have stingers.

Where is the queen is probably the No. 1 question that we are asked about the indoor bee hive. You can read a little bit about that here, but the next question often comes up as “What makes a queen bee?” The short answer is, queens are fed royal jelly which makes them different from END_OF_DOCUMENT_TOKEN_TO_BE_REPLACED

A few years ago, we saw a mass of bees collected around the hole that led outside from the indoor bee hive. We thought the bees might be swarming — leaving the hive, which usually occurs when there are two queens raised and one leaves with half the hive — and were nervous that there END_OF_DOCUMENT_TOKEN_TO_BE_REPLACED

We’ve talked about the ways that native bees differ from honeybees (read that here) and how great of pollinators they are (read that here), but how do you identify native bees? There are seven known families of bees worldwide, and six live in North America: Andrenidae, Apidae, Colletidae, Halictidae, Megachilidae and Melittidae. The family Stenotritidae only END_OF_DOCUMENT_TOKEN_TO_BE_REPLACED

People often use the term bee when talking about any kind of buzzing creature outside — it could be a honeybee, a bumble bee, a mason bee, a sweat bee or even a wasp or yellowjacket. However, it’s important to differentiate between the different kinds of bees. That may be difficult since the U.S. has END_OF_DOCUMENT_TOKEN_TO_BE_REPLACED

The numbers of bees in the indoor beehive have gone down. But that’s pretty normal this time of year. It just means that our bees have entered winter mode and are getting ready to survive cold weather. Baby, it’s cold outside. As the weather cools down, a honeybee hive starts to change. One of the END_OF_DOCUMENT_TOKEN_TO_BE_REPLACED

“Where is the queen bee?” That’s usually the first question we get when people see the indoor bee hive at the Dickinson County Nature Center. The queen bee is pretty identifiable. Her abdomen — the longest part of her body — is almost twice the length of a worker bee. However, we almost never see END_OF_DOCUMENT_TOKEN_TO_BE_REPLACED

Myth: Bees are mean. Truth: Bee are nice. Honeybees only sting as a last resort, because they die after stinging. That means, unless they feel threatened or think you are going to hurt the hive, they will leave you alone. Myth: Bees will keep stinging you. Truth: As stated above, honeybees will die after stinging END_OF_DOCUMENT_TOKEN_TO_BE_REPLACED