When I started working for the Dickinson County Conservation Board five years ago, I didn't know much about identifying birds.

I could pick out a cardinal, a robin, a goldfinch and a bald eagle. I remember when I was watching the birds in the avian courtyard with a volunteer, and he pointed out a streaky brown bird that I would have figured was a sparrow and called it a pine siskin. He showed me how this American goldfinch relative in disguise can be identified by its streaked appearance and the yellow in its wings. That was one of the first overwintering birds that I learned to identify. 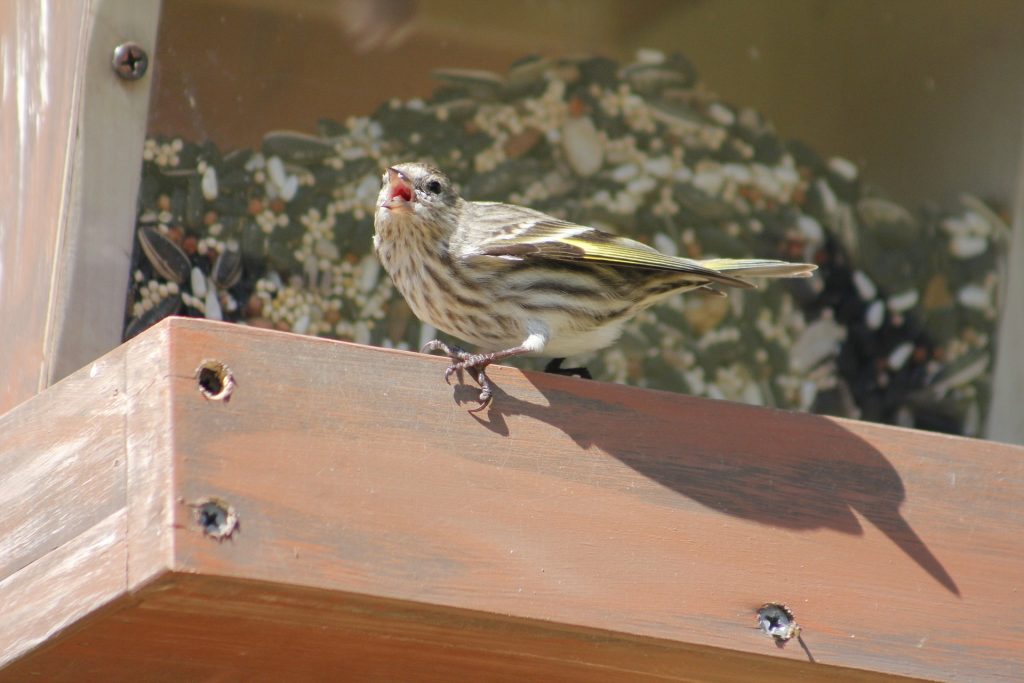 Pine siskins can be told apart from most finches because of their long, sharply pointed bill that is more slender than others in its genus. They also have a short, notched tail. It is the only carduelid that is entirely brown and streaked with a yellow flash in the wings.

Several sources explain the call of the pine siskin as a hoarse or husky goldfinch.

Don't they get cold?

Iowa can reach drastically cold temperatures, so it seems odd to us that birds actually fly here as their overwintering spots. However, these birds are built to withstand even colder temperatures. Pine siskins can increase their metabolic rate to up to 40 percent more than a typical songbird to survive temperatures as low as -94 degrees Fahrenheit. They put on half as much winter fat as common redpolls and American goldfinches, however, they can store food in a part of their esophagus called the crop which gives them extra energy in the cold.

With a name like pine siskin, you might think you only see these songbirds in evergreens. They do love conifer seeds, but they also feed on deciduous seeds, tree buds, young garden vegetables and grass seeds. They will even each insects and spiders. 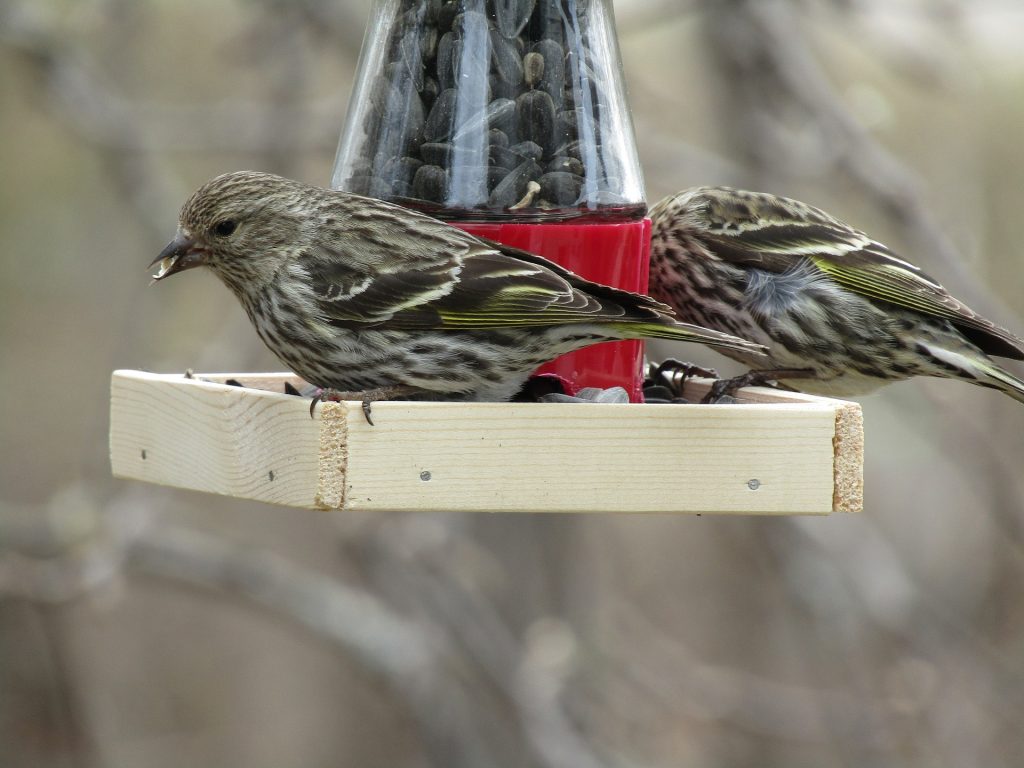 Naturalist Ashley Hansen talks about how amazing bird eggs are — from the myriad of colors to the variety of sizes. You can learn even more about bird eggs by downloading our bird egg memory match game! Simply print off the pieces on cardstock, cut them out and match eggs with the adult bird. When END_OF_DOCUMENT_TOKEN_TO_BE_REPLACED

Iowa is home to nine different owl species. You might not have seen all of them before, however, as two are state endangered — the short-eared owl and the barn owl — and one is state threatened — the long-eared owl. Let’s take a look at some of the most interesting facts at each species, END_OF_DOCUMENT_TOKEN_TO_BE_REPLACED

Bright birds with forked tails that swoop and dive around you — we see a lot of these in Kenue Park. They’re definitely swallows, but can you tell which kind? In Iowa, you’re likely to see four different kinds of swallows: Barn swallows, tree swallows, cliff swallows and purple martins. They’re quite similar, but relatively END_OF_DOCUMENT_TOKEN_TO_BE_REPLACED

Pine siskins, purple finches, dark-eyed juncos, American tree sparrows — these Iowa winter birds are really only just a few of the birds that make winter a bit more fun in this cold state. 1. Red-breasted nuthatch Red-breasted nuthatches live year-round in many parts of the western United States and Canada, but they spent winter, END_OF_DOCUMENT_TOKEN_TO_BE_REPLACED

Not all finches have “finch” as part of their name, so you might be surprised just how many finches you have at your feeder. Common redpoll, northern cardinal, rose-breasted grosbeak, scarlet tanager, indigo bunting — all of these are actually finches. (Nine fun facts about woodpeckers) However, most of these are pretty easily identifiable. That END_OF_DOCUMENT_TOKEN_TO_BE_REPLACED

There are birds at your nut feeder with black, white and red. What are they? The safe answer is, it’s a woodpecker. Adult males of six of the seven species of woodpeckers in Iowa have some combination of black, white and red, in fact. It might be a red-headed, red-bellied, downy, hairy, pileated woodpecker or END_OF_DOCUMENT_TOKEN_TO_BE_REPLACED

Birding is such a popular hobby because everyone can do it. Whether you are backyard birding, taking a hike or even boating, you can always catalogue the birds that you see. The he Dickinson County Nature Center features nests of some of the most common birds you might see right outside your window. (Grackles, blackbirds END_OF_DOCUMENT_TOKEN_TO_BE_REPLACED

More than 40 people attended last week’s Turkey Trot hike through Kenue Park and ended the Thanksgiving celebration by making their own pinecone bird feeders. If you didn’t attend, why don’t you grab the kids, head out on a wintry hike today, find some pine cones and make bird feeders of your own? (Okoboji seagulls END_OF_DOCUMENT_TOKEN_TO_BE_REPLACED

We are planning on redoing our landscaping, and a volunteer bush on the corner of the house needs to come out. However, my husband Snapchatted a picture to me of a robin, and she decided to make her nest right in the bush. Needless to say, that bush will not be going anywhere for the END_OF_DOCUMENT_TOKEN_TO_BE_REPLACED