Although purple finches have a non-breeding range throughout the eastern half of the U.S., they may be more of an irregular visitor to your feeder.

Part of that could be due to competition with its look-alike, the house finch. (Learn how to tell them apart here) The house finch is native to the western U.S. and Mexico, but it was introduced in New York in the 1940s when they were put up for sale as "Hollywood finches" and then released into the wild. House finches spread from there and compete with purple finches, and some say that competition has pushed purple finches from feeders back into their natural woodland habitat. One study of finch behavior found that purple finches lost to house finches more than 95 percent of the time.

Purple finch populations have decreased by about 1.5 percent per year since 1966. 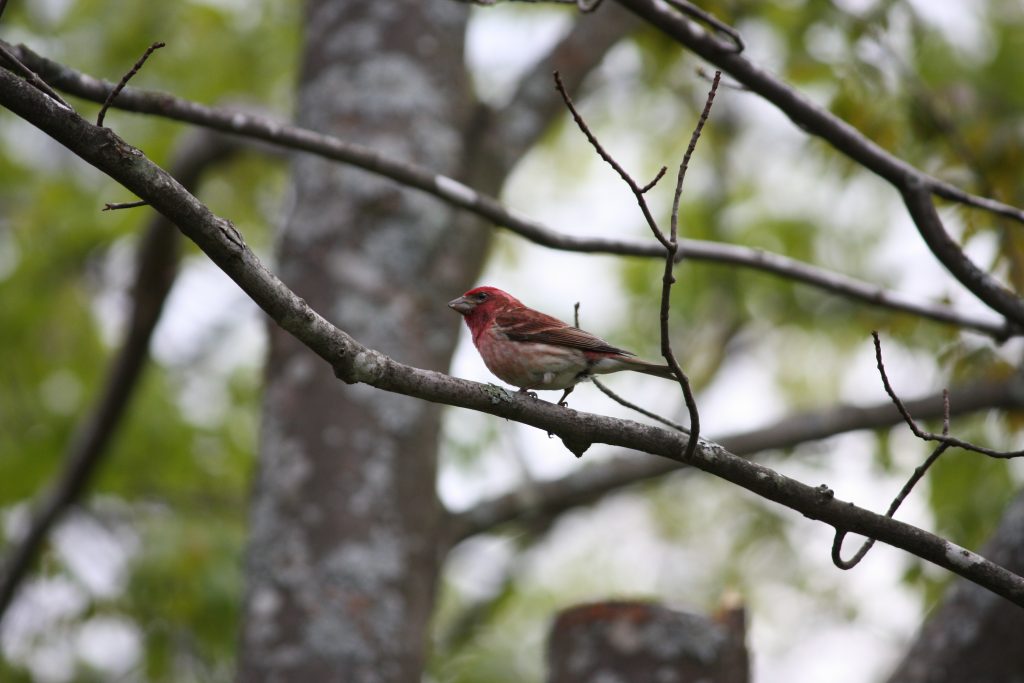 If you do want to draw in purple finches, they love black oil and hulled sunflower seeds, nyjer and millet. These birds don't seem to stick to the same places each winter, so you might see them one year and not the next.

Purple finches have a relatively large beak for their small size --- they only grow to 4.7-6.3 inches in length and weigh about an ounce. However, they use their big beak and tongue to crush seeds to find the nut inside. They can also get nectar from a flower without eating the whole thing and get seeds in fruit without eating the entire fruit.

Purple finches show aggression through their body language, leaning toward an opponent with its neck outstretched and its bill pointing at the other bird. If the other bird doesn't back down, purple finches will go into a peck attack. Studies have found that disputes in flocks usually lead to females winning over males.

Some birds have short, quick calls and songs, but purple finches tend to have longer, drawn out cadences. Their typical call is a short "tek" sound, but males and females each have longer songs. A male's warbling songs can be six-23 notes, and a female's song from the nest can be as long as 1-2 minutes.

Naturalist Ashley Hansen talks about how amazing bird eggs are — from the myriad of colors to the variety of sizes. You can learn even more about bird eggs by downloading our bird egg memory match game! Simply print off the pieces on cardstock, cut them out and match eggs with the adult bird. When END_OF_DOCUMENT_TOKEN_TO_BE_REPLACED

Who doesn’t have empty toilet paper tubes? We all do. And if you don’t right now, you definitely will have some soon. Let’s use them for a fun purpose and turn them into adorable birds, and you can make whatever kind of bird you want. I chose a robin — my mom’s favorite — and END_OF_DOCUMENT_TOKEN_TO_BE_REPLACED

Two volunteers were weeding an area and found a small chipping sparrow nest in a low bush. In the nest were three of the sparrow’s bright blue, speckled eggs and another egg that didn’t match. This fourth egg was larger, white and speckled with brown. If you find a similar scenario, you’re looking at a END_OF_DOCUMENT_TOKEN_TO_BE_REPLACED

Pine siskins, purple finches, dark-eyed juncos, American tree sparrows — these Iowa winter birds are really only just a few of the birds that make winter a bit more fun in this cold state. 1. Red-breasted nuthatch Red-breasted nuthatches live year-round in many parts of the western United States and Canada, but they spent winter, END_OF_DOCUMENT_TOKEN_TO_BE_REPLACED

Not all finches have “finch” as part of their name, so you might be surprised just how many finches you have at your feeder. Common redpoll, northern cardinal, rose-breasted grosbeak, scarlet tanager, indigo bunting — all of these are actually finches. (Nine fun facts about woodpeckers) However, most of these are pretty easily identifiable. That END_OF_DOCUMENT_TOKEN_TO_BE_REPLACED

There are birds at your nut feeder with black, white and red. What are they? The safe answer is, it’s a woodpecker. Adult males of six of the seven species of woodpeckers in Iowa have some combination of black, white and red, in fact. It might be a red-headed, red-bellied, downy, hairy, pileated woodpecker or END_OF_DOCUMENT_TOKEN_TO_BE_REPLACED

Birding is such a popular hobby because everyone can do it. Whether you are backyard birding, taking a hike or even boating, you can always catalogue the birds that you see. The he Dickinson County Nature Center features nests of some of the most common birds you might see right outside your window. (Grackles, blackbirds END_OF_DOCUMENT_TOKEN_TO_BE_REPLACED

More than 40 people attended last week’s Turkey Trot hike through Kenue Park and ended the Thanksgiving celebration by making their own pinecone bird feeders. If you didn’t attend, why don’t you grab the kids, head out on a wintry hike today, find some pine cones and make bird feeders of your own? (Okoboji seagulls END_OF_DOCUMENT_TOKEN_TO_BE_REPLACED