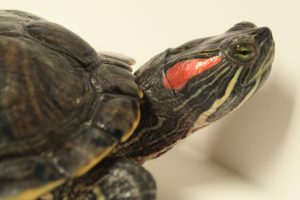 Red-eared slider turtle (Trachemys scripta) are found throughout the United States, but that hasn't always been the case.

These aquatic turtles are natively found in the southeastern United States from Texas to Alabama north to southern Ohio and into Kansas. Their native watersheds may have even extended into Iowa. 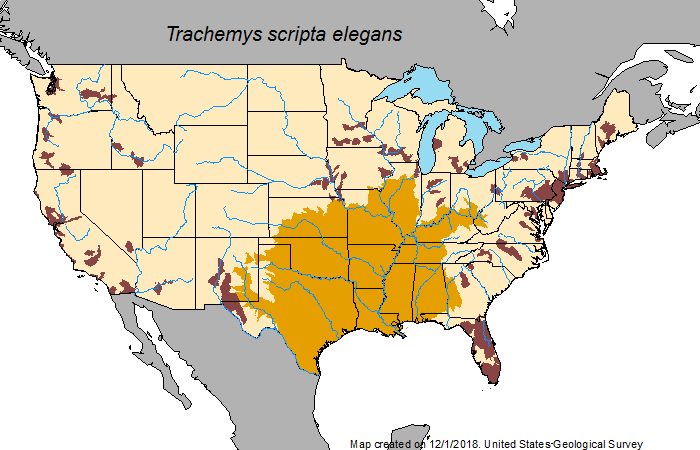 Red-eared sliders are natively found in the orange-colored watershed regions.

Red-eared sliders gained popularity in the 1900s as pets, and that popularity skyrocketed in the late 1980s and early 1990s with the rise of the "Teenage Mutant Ninja Turtle" franchise. In the original comic book series by Mirage Studios, Leonard, Raphael, Donatello and Michelangelo were all mutated red-eared slider turtles, and their red bandanas were an allusion to the species that has red markings behind the eyes.

In different "Teenage Mutant Ninja Turtle" series, the turtles changed species or were non-descript, but the red-eared slider reference came back in the "Rise of the Teenage Mutant Ninja Turtles" animated series in 2018. In that series, each turtle is a different species: Leonardo is a red-eared slider, Raphael a snapping turtle, Donatello a softshell turtle and Michelangelo a box turtle. 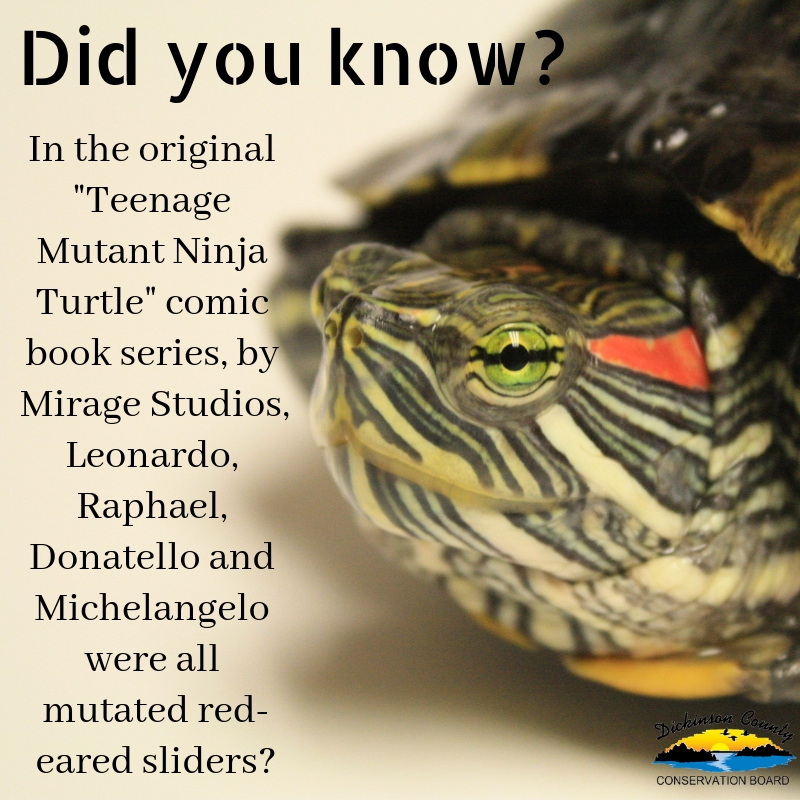 As red-eared sliders were kept as pets, they began to be released or escaped into their environments. The USGS map above shows burgundy highlights were these non-native turtles now have significant populations.

Red-eared sliders are protected in Iowa, meaning it is illegal to kill one or collect a wild turtle to keep as a pet.

(What kind of turtle is it? Learn how to tell the difference between Iowa species.)

As aquatic turtles, red-eared sliders really love the water. They spend almost their entire lives in the water except when they come out to bask in the sun. They even hibernate October-April in the mud at the bottom of the river or pond that they call home, and they sleep underwater during their active periods.

They caress their loved one.

Red-eared sliders have some interesting courtship behaviors that include caressing that special someone. A male will follow a female to shallow water and then will swim in front of her, facing her head to head, where he will stretch out his front legs and rub the sides of her face.

If she responds positively, she may respond by caressing his front legs with her front claws, and then they will proceed to breeding.

They eat healthier with age.

It seems like humans cut back on red meat as they age and try to fit more fruits and vegetables into their diets. The same is true with red-eared sliders. Young hatchlings are mainly carnivorous, using that protein to grow. Older turtles turn more herbivorous and eat plenty of vegetation.

Like all aquatic turtles, red-eared sliders have to eat in the water. Their fixed tongues can't move freely, so eating underwater helps their food to move around in their mouths to get ground down and to be swallowed.

People love to spot turtles in the wild. Snapping turtles, painted turtles, softshell turtles — it is so fun getting to see these truly unique creatures. Let’s celebrate turtles right at home by making a button turtle craft. You’ll need:A printed templateColored pencils, crayons or markersButtonsGlue Print out our button turtle template, and color it END_OF_DOCUMENT_TOKEN_TO_BE_REPLACED

We see many types of turtles roaming around northwest Iowa in the summertime, especially painted turtles and snapping turtles. But we don’t see any in the winter. Where do they all go? Painted turtles and snapping turtles spend their winters in lakes or ponds, living beneath the ice the forms. They survive because of a END_OF_DOCUMENT_TOKEN_TO_BE_REPLACED

Turtle or tortoise — they’re different creatures, but you can make this fun finger puppet into whichever you would like. Otherwise, you can use your imagination and make your own distinctive turtle! Make it pink. Make it sparkly. Make it your own. First, start off by printing off the free turtle finger puppet template onto END_OF_DOCUMENT_TOKEN_TO_BE_REPLACED

We had someone comment that Teddy the box turtle looked unhappy because he wasn’t in water. However, he’s a terrestrial turtle, so his kind lives the majority of their lives on land and not in the water. Yet, he isn’t a tortoise. Some people in Florida released tortoise hatchlings into the ocean. However, they aren’t END_OF_DOCUMENT_TOKEN_TO_BE_REPLACED

Shells, claws and tails — turtles can seem confusingly similar. However, if you know a few key differences to look for, you can soon confidently identify some common turtle species in Iowa. There are 13 turtle species known in Iowa, but we’re going to look at just five — Blanding’s turtles, painted turtles, red-eared sliders, END_OF_DOCUMENT_TOKEN_TO_BE_REPLACED

Annie and Jeff loved the Dickinson County Nature Center. But they’re not visitors. They don’t even work here. Actually, they live here! That’s because, even though they have human-like names, Annie and Jeff are the nature center’s painted turtles (Chrysemys picta.) Everyone loves checking out our painted turtles, so here are some fun facts about END_OF_DOCUMENT_TOKEN_TO_BE_REPLACED

See more about the Dickinson County Nature Center’s other turtle ambassadors: Teddy the turtle looks for a friend Five facts you probably didn’t know about painted turtles 7 things Teddy the turtle wants you to know