People speculate how both gangsters and snapping turtles cut off people's fingers, so when the Dickinson County Nature Center got a baby snapping turtle as an animal ambassador, it was named Capone after the legendary gangster Al Capone. 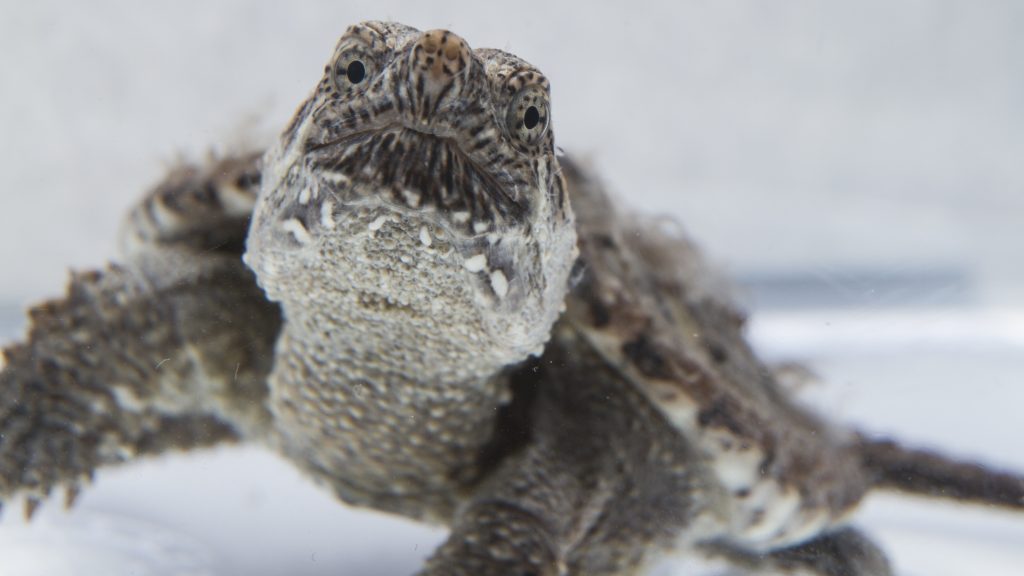 Common snapping turtles (Chelydra serpentina) are the largest turtles in Iowa, and they are quite fascinating creatures.

A snapping turtle can't hide in its shell.

Unlike most turtles, common snapping turtles can't hide in their shells. Most turtles can pull the head and legs into the shell to protect themselves from predators, and some species, like Blanding's turtles and ornate box turtles, have a hinged lower shell that can actually move upward and totally enclose the head and front legs. A snapping turtle's plastron --- the lower shell --- is only big enough to barely cover the body. It can retreat slightly underneath the carapace --- the upper shell --- but not anywhere near how a typical turtle can. 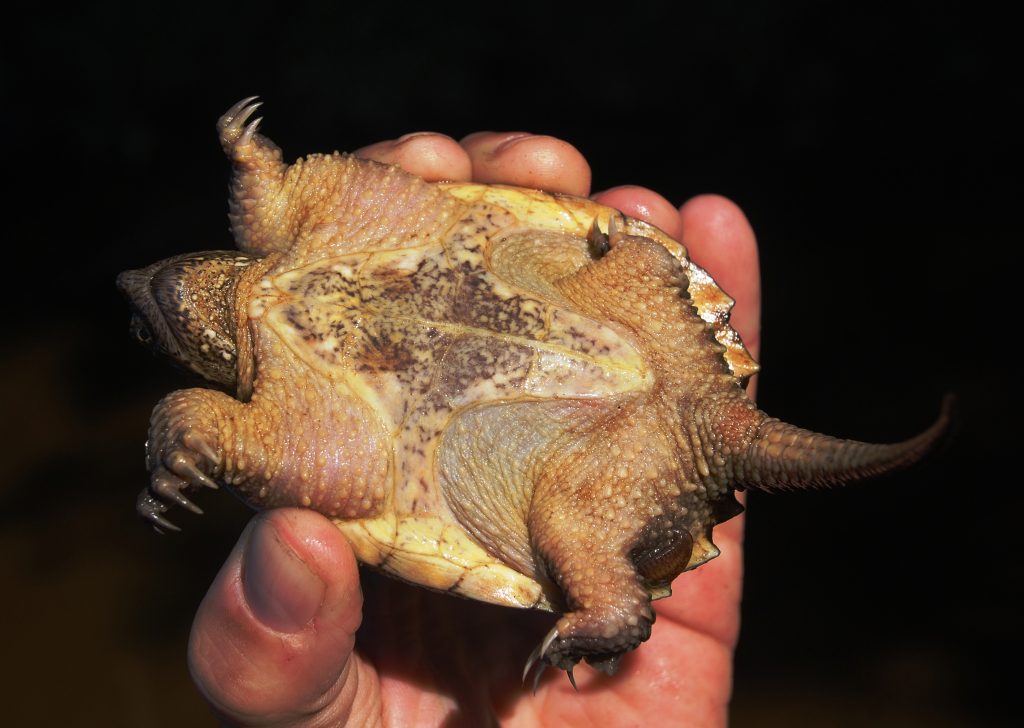 Perhaps that is why snapping turtles are more aggressive than a regular turtle, because they can't just retreat from predators but have to fight them off.

As full-grown turtles, snappers have one main predator --- humans. Snapping turtles are harvested for meat, and restrictions were introduced in Iowa to protect the species from overharvest.

Snapping turtles themselves are slow predators.

Common snapping turtles are not fast at catching food, so they will eat pretty much anything they can, including dead animals, aquatic invertebrates, aquatic plants, small fish, frogs, tadpoles, snails, leaches and even baby ducks and goslings. Small prey are swallowed whole, larger prey can be torn apart with their claws and swallowed. 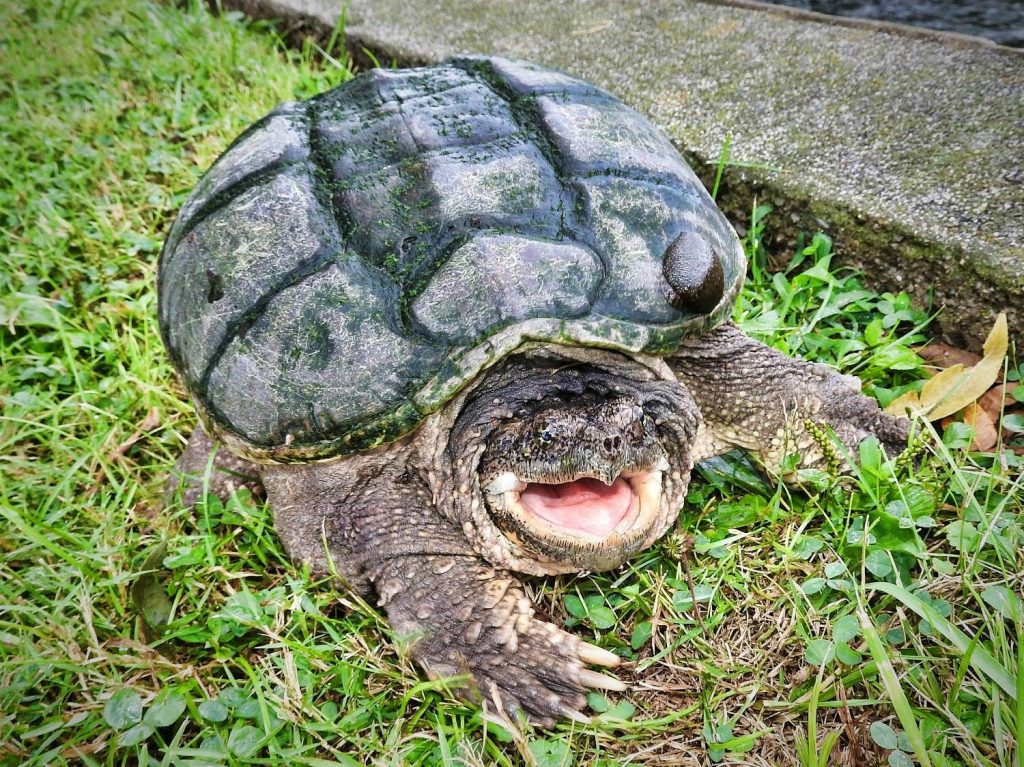 Most aquatic turtles, like snapping turtles, have a tongue that is fixed and can't move food around in the mouth. They have to eat underwater in order for the food to move around and be chewed.

Common turtles are often lumped in with alligator snappers. 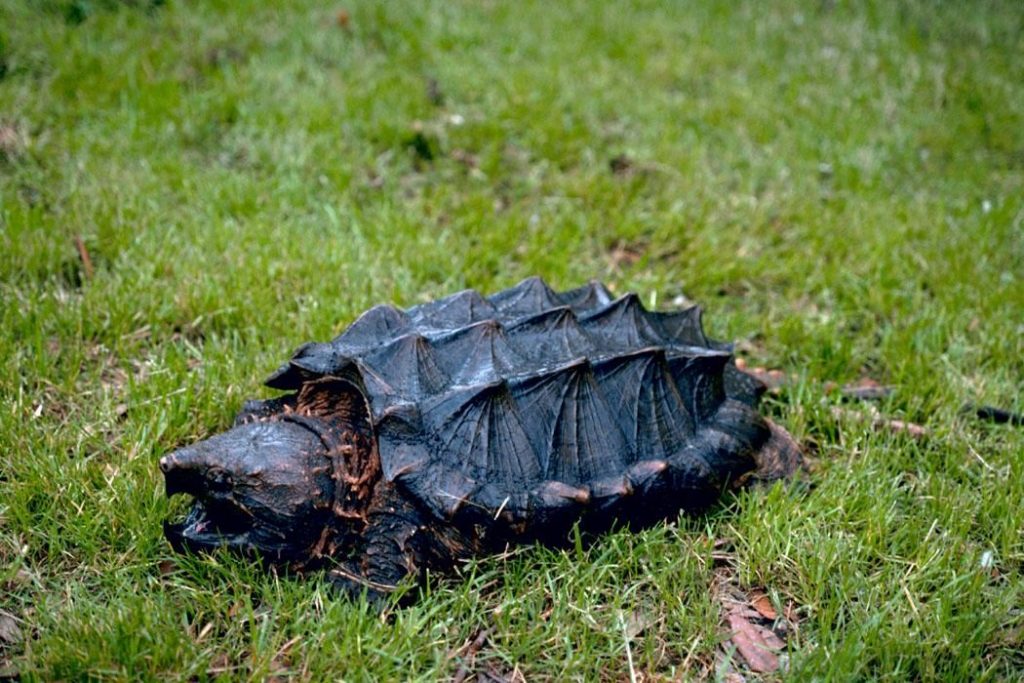 Alligator snapping turtles have a tongue that is shaped like a worm, and they use that to lure in prey while a common snapping turtle has a normal tongue.

Alligator snapping turtles may be found as far north as southeast Iowa, but they are not considered a resident of the state.

Their bites are bad, but their beaks are worse.

Want to find out more about turtles? Learn how to tell apart some common species of Iowa turtles here.

People love to spot turtles in the wild. Snapping turtles, painted turtles, softshell turtles — it is so fun getting to see these truly unique creatures. Let’s celebrate turtles right at home by making a button turtle craft. You’ll need:A printed templateColored pencils, crayons or markersButtonsGlue Print out our button turtle template, and color it END_OF_DOCUMENT_TOKEN_TO_BE_REPLACED

Teddy the ornate box turtle at the Dickinson County Nature Center is named after former president and conservationist Theodore Roosevelt. Roosevelt, whose nickname was Teddy — even though he didn’t like it, was born in 1858 in New York City. He grew up homeschooled due to medical conditions and grew a passion for animals during END_OF_DOCUMENT_TOKEN_TO_BE_REPLACED

We see many types of turtles roaming around northwest Iowa in the summertime, especially painted turtles and snapping turtles. But we don’t see any in the winter. Where do they all go? Painted turtles and snapping turtles spend their winters in lakes or ponds, living beneath the ice the forms. They survive because of a END_OF_DOCUMENT_TOKEN_TO_BE_REPLACED

Turtle or tortoise — they’re different creatures, but you can make this fun finger puppet into whichever you would like. Otherwise, you can use your imagination and make your own distinctive turtle! Make it pink. Make it sparkly. Make it your own. First, start off by printing off the free turtle finger puppet template onto END_OF_DOCUMENT_TOKEN_TO_BE_REPLACED

We had someone comment that Teddy the box turtle looked unhappy because he wasn’t in water. However, he’s a terrestrial turtle, so his kind lives the majority of their lives on land and not in the water. Yet, he isn’t a tortoise. Some people in Florida released tortoise hatchlings into the ocean. However, they aren’t END_OF_DOCUMENT_TOKEN_TO_BE_REPLACED

Red-eared slider turtle (Trachemys scripta) are found throughout the United States, but that hasn’t always been the case. These aquatic turtles are natively found in the southeastern United States from Texas to Alabama north to southern Ohio and into Kansas. Their native watersheds may have even extended into Iowa. Red-eared sliders gained popularity in the END_OF_DOCUMENT_TOKEN_TO_BE_REPLACED

Annie and Jeff loved the Dickinson County Nature Center. But they’re not visitors. They don’t even work here. Actually, they live here! That’s because, even though they have human-like names, Annie and Jeff are the nature center’s painted turtles (Chrysemys picta.) Everyone loves checking out our painted turtles, so here are some fun facts about END_OF_DOCUMENT_TOKEN_TO_BE_REPLACED

When kids who have been to the nature center before return, many of them beeline to see Teddy the ornate box turtle. (Teddy has some lessons for us to learn in this video.) But how much do you really know about the ornate box turtle (terrapene ornata ornata)? Long live Teddy. Ornate box turtles have an END_OF_DOCUMENT_TOKEN_TO_BE_REPLACED

Teddy — named after conservationist former President Theodore Roosevelt — is an ornate box turtle. That means he is an omnivore and will eat both plants and animals, just like humans! See naturalist Ashley Hansen feed Teddy and learn what his favorite foods are in this video! You can also see more Teddy videos on END_OF_DOCUMENT_TOKEN_TO_BE_REPLACED

For Nature Tots last week, the theme was Turtle Power! To celebrate our reptile friends, we decorated our own turtle shells using our thumbprints, and this is a great and easy activity you can do with your little ones at home. Start out by drawing a large turtle on your sheet of paper. (Watch: END_OF_DOCUMENT_TOKEN_TO_BE_REPLACED