However, if you know a few key differences to look for, you can soon confidently identify some common turtle species in Iowa. There are 13 turtle species known in Iowa, but we're going to look at just five --- Blanding's turtles, painted turtles, red-eared sliders, ornate box turtles and snapping turtles. Box turtles and red-eared sliders have not been documented in Dickinson County, but we do have these species living at the Dickinson County Nature Center as animal ambassadors.

Shell
The most obvious difference between these five turtle species may also be the most obvious similarity. All turtles have shells, but the shape, coloring and texture of their shells varies greatly among species. 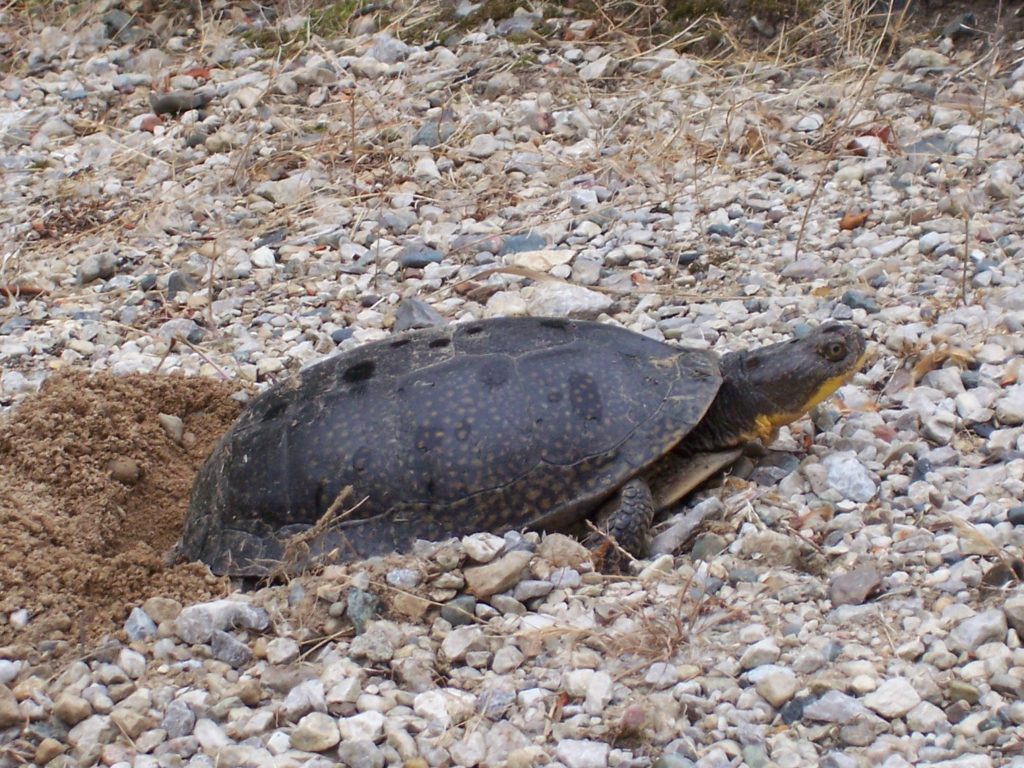 The Blanding's turtle, a threatened species in Iowa, has a smooth shell. The carapace --- upper shell --- is black or dark brown and speckled with yellow dots and stripes. The plastron --- lower shell --- is yellow with darker smudges of black or brown around the exterior. The ornate box turtle is also threatened. It has a domed shell that is also dark with yellow marks, but the yellow is more apparent and streaky.

Both Blanding's turtles and ornate box turtles have a hinged plastron that can come up to completely close in the head and front legs instead of just being able to tuck body away, like most other turtles.

Painted turtles also have a smooth upper shell that is dark green, brown or black with light lines scattered throughout. The plastron is red or orange with a blotchy pattern that may fade as the turtle ages. The bright plastron is where the turtle gets its name.

Red-eared sliders are actually not native to Iowa, instead coming from the southern United States, but they are quite common in the state now after having been released from the pet trade. They have a pretty smooth shell that is dark green on top, and each scale has a yellow bar with yellow rings around it. The plastron is a light yellow color with dark smudges.

The common snapping turtle can be found throughout the eastern two-thirds of the United States. It has a very rough shell with peaked scales that form three ridges down the back. The shell can range from brown to black but can also look green as algae grows on it. The older the turtle, the smoother the shell may become. 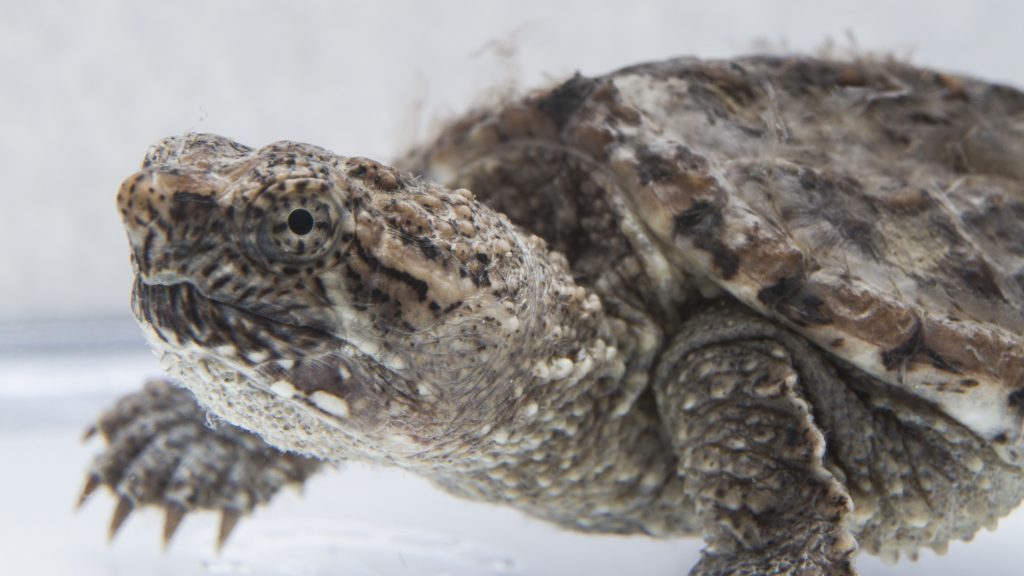 Body color
The Blanding's turtle's shell sometimes fades with age, so it can make it harder to identify, but its lower jaw and throat are yellow, making them easy to identify at any age. The exposed body is a bluish-black color.

Painted turtles have a dark head with  bright yellow lines extending from the nose to the shell. These lines might confuse it with red-eared sliders, which have similar lines, but sliders have a red spot behind each eye. However, as sliders get older, they may lose the bright red blotch. Red-eared sliders and painted turtles also have a line that runs through the eye. 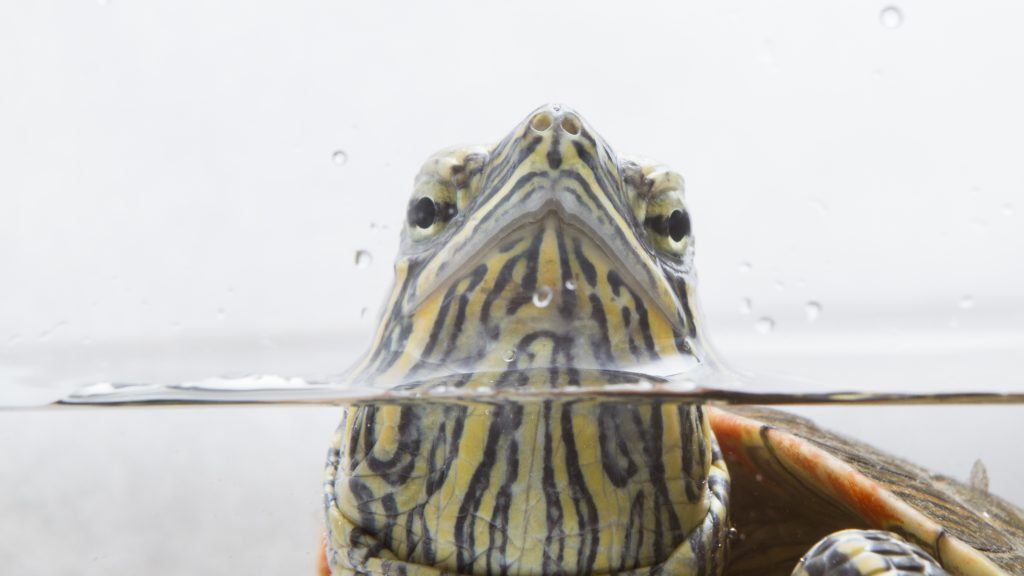 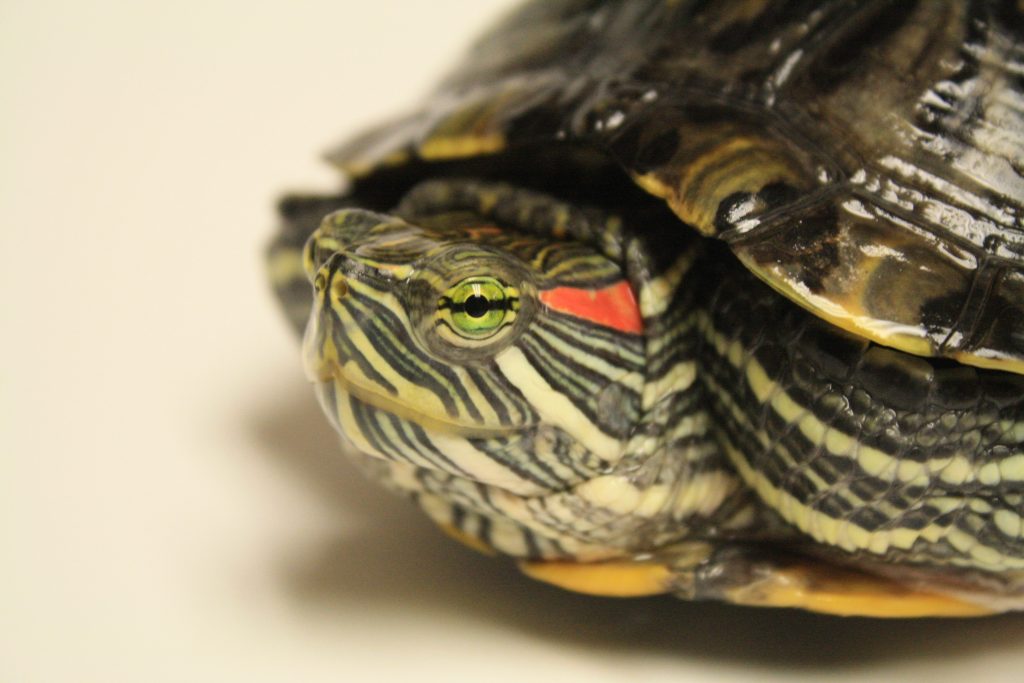 Snapping turtles have dark bodies and a tail that is as long as the shell with sawteeth on top. They have vibrant eyes with starbursts that stem from the pupil.

Size
Blanding's turtles have a shell that ranges from 5-8 inches. Painted turtles are a little smaller, ranging from 3.5-7 inches. Red-eared sliders are 5-11 inches; ornate box turtles 4-5 inches and snapping turtles come in at a whopping 8-14 inches and weigh an average of 23 pounds as adults.

Habitat
Blanding's turtles are semi-aquatic, which means they spend most of their time in shallow water but will move to land to forage for food or bask in the sun.

Painted turtles are found throughout much of the United States and Canada and love pretty much any aquatic area with vegetation and a muddy bottom they can dig into. They can be found in farm ponds, wetlands, slow-moving rivers, lakes and marshes.

Red-eared sliders love the water and rarely leave it unless it is to bask for short periods of time. Snapping turtles also spend most of their time in the water, usually in lakes and swamps but they can also be seen by deep lakes and rivers.

Ornate box turtles are terrestrial instead of aquatic, and they can be found in grasslands and agricultural areas. They spend much of their time underground, escaping the heat of the day.

In the past decade, concerns about the number of turtles in Iowa have spread, and in 2016, the Iowa Legislature passed a law establishing turtle trapping seasons and setting bag limits instead of allowing unlimited trapping. Daily catch limits are four snapping turtles, one painted turtle and one softshell turtle, and the season is closed mid-May through mid-July.

Want to learn more about the Dickinson County Nature Center's turtles? Check out these great articles:
Five Facts You Probably Didn't Know About Painted Turtles
Seven Things Teddy the Box Turtle Wants You to Know About Him
What Does Teddy the Turtle Eat?

People love to spot turtles in the wild. Snapping turtles, painted turtles, softshell turtles — it is so fun getting to see these truly unique creatures. Let’s celebrate turtles right at home by making a button turtle craft. You’ll need:A printed templateColored pencils, crayons or markersButtonsGlue Print out our button turtle template, and color it END_OF_DOCUMENT_TOKEN_TO_BE_REPLACED

Teddy the ornate box turtle at the Dickinson County Nature Center is named after former president and conservationist Theodore Roosevelt. Roosevelt, whose nickname was Teddy — even though he didn’t like it, was born in 1858 in New York City. He grew up homeschooled due to medical conditions and grew a passion for animals during END_OF_DOCUMENT_TOKEN_TO_BE_REPLACED

We see many types of turtles roaming around northwest Iowa in the summertime, especially painted turtles and snapping turtles. But we don’t see any in the winter. Where do they all go? Painted turtles and snapping turtles spend their winters in lakes or ponds, living beneath the ice the forms. They survive because of a END_OF_DOCUMENT_TOKEN_TO_BE_REPLACED

Turtle or tortoise — they’re different creatures, but you can make this fun finger puppet into whichever you would like. Otherwise, you can use your imagination and make your own distinctive turtle! Make it pink. Make it sparkly. Make it your own. First, start off by printing off the free turtle finger puppet template onto END_OF_DOCUMENT_TOKEN_TO_BE_REPLACED

We had someone comment that Teddy the box turtle looked unhappy because he wasn’t in water. However, he’s a terrestrial turtle, so his kind lives the majority of their lives on land and not in the water. Yet, he isn’t a tortoise. Some people in Florida released tortoise hatchlings into the ocean. However, they aren’t END_OF_DOCUMENT_TOKEN_TO_BE_REPLACED

Red-eared slider turtle (Trachemys scripta) are found throughout the United States, but that hasn’t always been the case. These aquatic turtles are natively found in the southeastern United States from Texas to Alabama north to southern Ohio and into Kansas. Their native watersheds may have even extended into Iowa. Red-eared sliders gained popularity in the END_OF_DOCUMENT_TOKEN_TO_BE_REPLACED

People speculate how both gangsters and snapping turtles cut off people’s fingers, so when the Dickinson County Nature Center got a baby snapping turtle as an animal ambassador, it was named Capone after the legendary gangster Al Capone. Common snapping turtles (Chelydra serpentina) are the largest turtles in Iowa, and they are quite fascinating creatures. END_OF_DOCUMENT_TOKEN_TO_BE_REPLACED