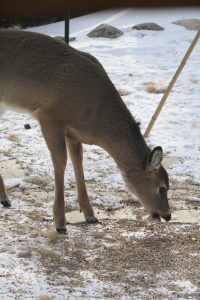 1. Hollow hairs help them stay warm in the winter.

Have you ever seen a deer that has snow on its back that doesn't melt? It makes people shiver to think about walking around covered in snow --- isn't the deer freezing? However, it's actually that frozen snow that shows just how warm a deer is. Deer and moose have hollow guard hairs over their furry undercoat that helps keep all of their body heat inside. They are so insulated that their body heat doesn't even escape enough to melt the snow on their backs. They don't even feel the cold from the snow.

2. Deer are created to eat vegetation.

White-tail deer have been documented to eat hundreds of different kinds of vegetation, and they have two qualities that help them get the most from their food.

First, white-tailed deer have 32 teeth, but they don't have any upper teeth in the front. Instead, they have a hard palate with a rough texture that helps them grind food, like molars for humans.

Second, deer also have a four-chambered stomach. The food travels from the mouth to the rumen, which has healthy bacteria to begin digestion. Then the reticulum circulates the food back to the mouth to chew again. The omasum then pumps the partially-digested food into the final chamber, called the abomasum, which is like a human's stomach. It finishes the digestive process.

Deer have baby teeth, just like people do, and lose them at about 18 months old. Their adult teeth then grind down year after year while foraging, and they lose about 1 millimeter of height each year. Scientists can tell how old a deer is by how much their molars have been ground down.

Most people know that deer are fast on land. They are able to run up to 40 miles per hour and jump 6-8 feet high. However, they can also swim up to 15 miles per hour. That's really fast considering they don't have fins, flippers or webbed feet!

5. Their white tails have more than one signal.

Deer flash their tails when signaling danger. However, their tails also signal danger in other ways. When the tail is down and the hairs are flared apart, it is signaling nearby alarm. When it pushes its tail down tightly against its rump so that you can barely see the white, it is signaling danger that is close at hand. The upright white flag is used to help deer stay together when they are running from harm. 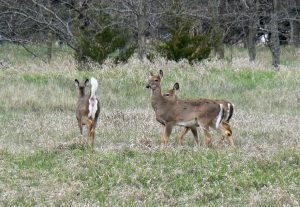 A tail that is swishing back and forth gives the all-clear signal when a deer is relaxed.

When walking through deep snow, it’s always easier when someone else leads. That person gets tired breaking the trail, but everyone who walks in his or her footsteps has an easier time of it. That is one reason that deer congregate during the winter. When they all use the same network of trails through the END_OF_DOCUMENT_TOKEN_TO_BE_REPLACED

Kids learn pretty early that animals that are awake at night are nocturnal. The word for the rest of us that are awake during the day, though, doesn’t seem quite as well known. Humans and many animals are what is called diurnal. Diurnal creatures wake and sleep with the rising and the setting of the END_OF_DOCUMENT_TOKEN_TO_BE_REPLACED

When you sit down to color a picture, it’s usually pretty obvious what you’re coloring. What’s fun about folding pictures is that you have to finish it before you can see exactly what you’ve done. As we transition from winter into spring, we thought it would be timely to create a folding picture that encompasses END_OF_DOCUMENT_TOKEN_TO_BE_REPLACED

1. Prairie voles Prairie voles are almost the epitome of a happy, healthy animal relationship. The creatures, about the size of a hamster, only live one-two years, but they are monogamous during that time. Once they meet a member of the opposite sex, pheromones help them to ready for mating. After mating, they show love END_OF_DOCUMENT_TOKEN_TO_BE_REPLACED

Baby names are so much fun. Whether you’re planning for your own child, getting ready for a baby shower or just having fun thinking of names, it can be quite a crazy world to look into. There are literally thousands upon thousands of names, and some can be quite crazy. It is the same with END_OF_DOCUMENT_TOKEN_TO_BE_REPLACED

Every Thanksgiving, our naturalists speak at Harris-Lake Park Elementary for a grandparent program, and this year, our environmental education coordinator Bryanna Kuhlman discussed what animals are thankful for. I thought her topic was so creative that I decided to share her ideas with you. Many of the things animals are thankful for are what humans END_OF_DOCUMENT_TOKEN_TO_BE_REPLACED

You’ve probably heard of the rut. And if you’re a deer hunter, then you most definitely have. However, there may be some facts about rut that you’re not overly familiar with. 1. Rut is a word for deer breeding season, not just the peak. It actually means all behaviors and activities associated with breeding season END_OF_DOCUMENT_TOKEN_TO_BE_REPLACED

Turkeys are odd-looking creatures. With their bumpy red heads, hanging flaps of skin around their faces and large tails, wild turkeys are quite a sight. The odd parts of their bodies also have interesting names and purposes. Let’s look at some of the body parts that make a turkey unique. What’s a snood? The snood END_OF_DOCUMENT_TOKEN_TO_BE_REPLACED

Mammals are usually the creatures that garner oohs and aahs when people see them on hikes, in their yards or even in zoos and conservation centers. They’re usually furry and cuddly with adorable eyes. (Some are ugly though — read about them here) Iowa has 57 different common mammal species, and some are charismatic while END_OF_DOCUMENT_TOKEN_TO_BE_REPLACED