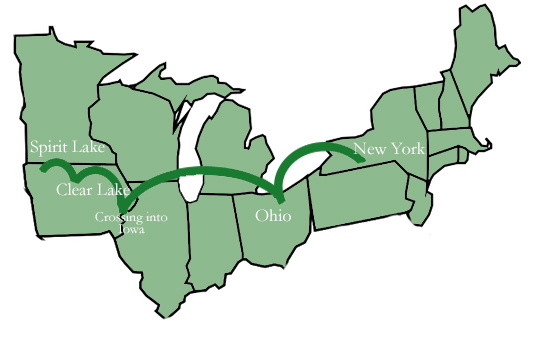 However, he wasn’t satisfied in New York and wanted to join the westward bound in pursuit of a new and better life.

So in 1853, 10 years after Abigail, better known as Abbie, was born, the family set off from New York with a dream of homesteading in Iowa. Along the way, they joined the eldest Gardner, Mary, who had married Harvey Luce, in Ohio.

Along with the Luces and their two children, the Gardner family passed from Rock Island, IL, to Davenport, IA, wintered in Shell Rock and finally settled in Clear Lake in 1855. The two families settled near each other, and Eliza began teaching children in a local log house. This became the first-ever Cerro Gordo County school.

While there, the Gardners and others in town experienced encounters with Sioux and Winnebagoes and heard tales of troublesom run-ins with native peoples.

The Gardners didn’t stay in Clear Lake long, though. After 16 months, the senior Rowland Gardner sold the family land and began the trek to Dickinson County with the Luces.

Abbie Gardner Sharp wrote in her “History of the Spirit Lake Massacre” book “About this time, this place began to be viewed as the ‘promised land’ of the adventureous pioneer; although there were yet no settlers in the county.”

The families arrived in what is now Arnolds Park, the location of the Abbie Gardner Sharp Historical Site, on July 16, 1856.

When they arrived, they met four trappers from Red Wing, MN — the only other settlers in the area.

The Gardners and Luces found a beautiful spot for on the south side of West Lake Okoboji to pitch their temporary tents. A log home was then constructed facing south, looking over rolling prairie and surrounded by looming oak trees.

Although Harvey Luce started to build a cabin, it wasn’t finished in time for winter, so the four Luces also joined Rowland, Frances, Eliza (16), Abbie (13) and young Rowland (6) in one home. Two single men, Robert Clark and William Wilson, were also staying with the family.

Since the Gardner family arrived in Dickinson County in July, it was too late to plant crops. That meant the family needed to travel to Fort Dodge for provisions, and Wilson decided to stay in Fort Dodge for the winter.

On one provision trip, the senior Rowland made a friend named Dr. Strong, who lived north of Spirit Lake in a settlement called Springfield, now Jackson, MN. Strong’s wife and Eliza got along so well when they met that Eliza went to stay with the Strongs in October, and due to winter weather, she was unable to return to her family and stayed with the Strongs that winter.

Read other installments in this series:
“Who was Inkpaduta?”
“The Spirit Lake Massacre”
“Taken captive”
“Abbie’s rescuers”
“Life continues on”