As word of the violence in Spirit Lake and Springfield spread, plans to rescue the captive women began to take shape within the Minnesota government with Sioux Indian Agent Charles Flandrau. Meanwhile though, Abbie Gardner and the other captives focused on how to stay alive in a culture they did not know and were fearful of.

When Mrs. Noble and Mrs. Thatcher were taken captive on March 9, a day after Abbie, and she was taken to them. They were able to talk about their experiences but soon were separated, their hair braided and their faces painted. They were also given moccasins to wear, because Abbie remembered the Native Americans didn’t want rescuers to spot the captives’ shoeprints.

On March 10, the band cross West Lake Okoboji, and Abbie was told to drive a team of horses, which she said was the last time she wallowed to ride instead of walk. She was also given a pack to carry, which she estimated at 70 pounds, and struggled to get through the deep snow without the snowshoes that the American Indians wore.

Inside the pack, Abbie carried: Eight bars of lead, one pint of lead balls, one teepee cover, one blanket, one bed comforter, one iron bar of unknown use, one gun and a four-foot piece of wood that helped stabilize the pack.

The Death of Mrs. Thatcher

Mrs. Thatcher’s three-week-old daughter, Dora, had died during the Spirit Lake violence, and the woman was injured and ill from the beginning of her captivity.

After six weeks with the band, the snow began to melt. The group was crossing a bridge of sticks and logs over the Big Sioux River near Flandreau, SD, when Mrs. Thatcher was pushed into the churning water. She fought against the current as clubs were thrown at her and poles were used to push her under the wake.

She floated down the river and was finally shot in the water at the next bridge crossing.

Her 19-year-old husband had survived the massacre, because he had been away, getting supplies. 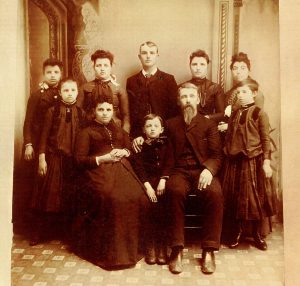 Joseph Thatcher survived the massacre and is seen with his second family in Kansas.

On May 6, about 30 miles west of the Big Sioux River, two Native Americans named Makpeyakahoton and Sehahota visited Inkpaduta’s band and offered to purchase Abbie. They were told she was not for sale but were allowed to purchase Mrs. Marble.

Indian agent Charles Flandrau wrote, “By the action of these young men, we not only got one of the captives, but we learned for the first time definitely, the whereabouts of the marauders, and the assurance that the other women were still alive.” 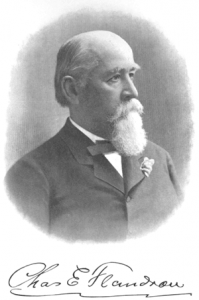 Mrs. Marble was brought to Yellow Medicine Reservation where the two Native Americans turned her over to one of their parents, and she was treated like a daughter, she wrote in a later letter to Abbie.

The two rescuers were paid $1,000 by the state of Minnesota for aiding in Mrs. Marble’s return, and she accompanied Major Flandrau to St. Paul, MN.

Another Death, Another Rescue

One month after Mrs. Marble’s rescue, Abbie and Mrs. Noble were sold to another Native American named Wanduskaihanke, however, they continued to travel with Inkpaduta’s band with their new owner.

One day, Mrs. Noble — who had lost hope after her cousin-by-marriage and friend Mrs. Thatcher had died — was ordered to come out of the teepee she was in, but she refused. She was dragged out by Inkpaduta’s son Roaring Cloud and was beaten to death.

It wasn’t long after this tragedy that the band had reached a Sioux gathering with 190 Sioux lodges, many of whom hadn’t seen a caucasian before and commented on Abbie’s light hair and blue eyes.

Three Sioux men dressed in settler-type clothing came into the camp and purchased Abbie and left the camp with her. They had paid her owner with two horses, 12 blankets, two kegs of powder, 20 pounds of tobacco, 32 yards of blue cloth, 37.5 yards of calico and ribbon and other small articles.

She was not sure what was happening and was terrified of living with more Native Americans, until they reached a man who could speak English and she learned the three men who purchased her were rescuing her.

“All my fears from them had been groundless, as they were really my friends. How often it is thus in life, we do not know our friends from our enemies,” she wrote in “History of the Spirit Lake Massacre.”

By June 22, Abbie and her rescuers made it to St. Paul, and the next day she was brought to the governor. She learned her three rescuers had been tracking Inkpaduta’s band since spring, had found Mrs. Noble’s body and buried her and then had been able to rescue Abbie.

When Abbie met the governor, she received a high honor from a member of the Yankton tribe that rescued her.

She was seated on a stool and a feathered war cap was placed on her head. Each of the 36 feathers in the cap represented lives that the Yankton chief had taken, but he parted with the cap to honor her for her bravery in captivity. She was also told that while she possessed the cap she would be under the protection of all Dakota Indians.

However, the war cap was lost in a house fire in 1859. A painting of it is on display at the Abbie Gardner Cabin & Museum.

Read other installments in this series:
“Traveling to Spirit Lake”
“Who was Inkpaduta?”
“The Spirit Lake Massacre”
“Abbie’s rescuers”
“Life continues on”