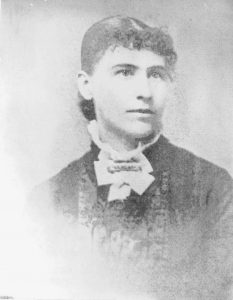 Following her rescue after nearly four months in captivity with Inkpaduta’s band of Native Americans, Abbie learned that her sister Eliza had survived the Springfield attack and had married William Wilson, who had lived with the Gardners in Okoboji for a time, and moved to Hampton, IA.

On July 5, they were reunited. Soon after, Abbie met Cassville Sharp, a relative of the Noble and Thatcher families, and they married on Aug. 16, 1857. Abbie was 14 years old. They had three children. Albert, named after Abbie’s nephew that died during the Spirit Lake Massacre, was born in 1859. Allen was born in 1862, and Minnie was born in 1871, but she died when she was 18 months old. 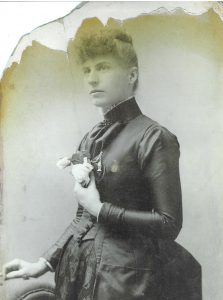 The family moved around the Midwest, but encountered some tragedies along the way. The Sharps moved to Grundy County, MO, in 1859, but their house burned down, and with it burned the war cap Abbie was given after her rescue. The next year, the Sharps moved to Kansas but left after only week when they saw the area was in a severe drought. In 1870, while living in Bremer County, IA, the Sharp’s house burned down again.

In 1858, Abbie went back to the Iowa Great Lakes area and found that J.S. Prescott had claimed the former Gardner land, and it was later purchased by the Rev. Samuel Pillsbury. However, in 1891, 13 acres of the original Gardner claim were purchased by a syndicate and lots were sold. Thanks to proceeds from her “History of the Spirit Lake Massacre” book, Abbie Gardner Sharp could afford to purchase her family’s cabin and land, with alterations that had been made to the cabin.

She then worked on making the place a historical site and traveled to Des Moines during the winter of 1893-94 to speak to legislators about erecting a monument in memory of the Spirit Lake Massacre. The 25th General Assembly appropriated $5,000 to the project in 1894.

The monument, still located on the site, was dedicated on July 26, 1895, and about 7,000 people attended the ceremony, including Abbie, Charles Flandrau and Chetanmaza, one of her rescuers.

Victims’ remains that could be found were re-interred at the site, except for the Gardner family, who still remain in the original grave across the street from the monument. 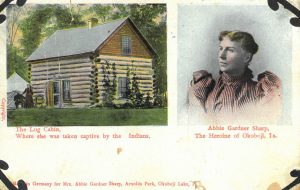 Abbie then turned her cabin home into a museum for visitors to the Iowa Great Lakes area to learn about the Spirit Lake Massacre, and she even commissioned an unknown artist to paint four scenes of the massacre and her experiences in captivity as well as the war cap. 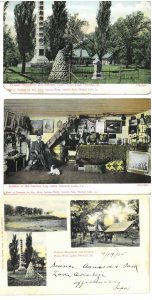 Antique postcards from the historic site

The Abbie Gardner Cabin & Museum is open today and still features these original paintings which have been restored over time.

Abbie Gardner Sharp died on Jan. 21, 1921, and was buried in the Gardner family cemetery. 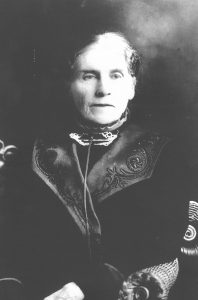 Read other installments in the series:
“Traveling to Spirit Lake”
“Who was Inkpaduta?”
“The Spirit Lake Massacre”
“Taken captive”
“Abbie’s rescuers”