Abbie Gardner was held captive by Inkpaduta’s band after about four months in captivity. Three Native Americans paid for her and took her back to Minnesota. They were paid $1,000 for her rescue.

He was educated at a mission school on the Yellow Medicine Reservation and learned to read and write the Dakota language. During the U.S.-Dakota War between Sioux Indians and settlers in New Ulm, MN, in 1862, he helped organize a peace party and served as a spokesman for Dakota who opposed the war. 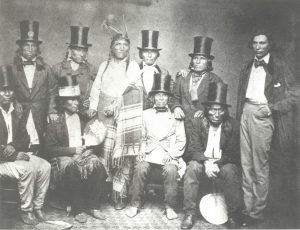 Dakota leaders in Washington, D.C., including Little Paul (fourth from left) and John Other Day (fifth from left)

Hotonhowashta, or Beautiful Voice, known as John Other Day and listed in other records as Anpetu-Topeka, was a full-blooded Sioux Indian who led the expedition to rescue Abbie Gardner from Inkpaduta’s band following the Spirit Lake Massacre. Following the rescue, he served as a Dakota leader in Washington, D.C., summoned to discuss a treaty after Minnesota became a state. There, Other Day met a Caucasian woman and married her. 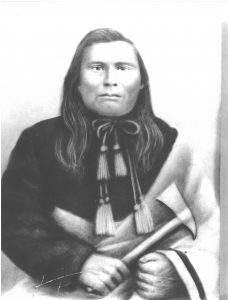 During the U.S.-Dakota War, Other Day saved the lives of 62 people by warning settlers of the impending Sioux attack. He was rewarded with $2,500 by the U.S. government but fellow tribesmen burned his home and farmland. He died in the mid-1860s. 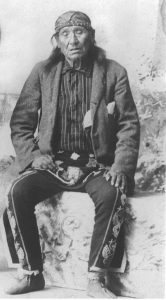 Read other installments in this series:
“Traveling to Spirit Lake”
“Who was Inkpaduta?”
“The Spirit Lake Massacre”
“Taken captive”
“Life continues on”