Glowing body parts that warn predators, colors to camouflage, body parts that look like other things in nature --- animals have crazy cool adaptations that help them survive.

Alfred R. Wallace was a naturalist, explorer and biogeographer during the 1800s, and when he was studying creatures around the world, he found that those with the best adaptations survived the best. For instance, giraffes with the longest legs and necks could reach into the treetops to each leaves when grass on the ground dried up, and those giraffes then survived while others died because they couldn't reach the nutrition they needed. Antelope with short or weak legs couldn't outrun their predators, so they died and the antelope that had healthy, long legs survived. Those traits were then passed down to their offspring.

Animals have many secrets to survival, but Wallace found four specific ones. He called them protective coloring, protective warnings, protective resemblance and mimicry.

Protective coloring is when creatures' coloring differs dependent on where they live, to help them blend in to their surroundings to help them hide from predators. 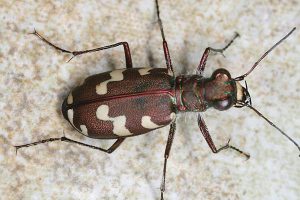 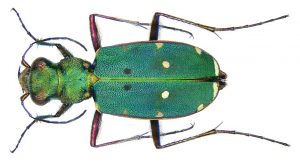 Instead of camouflage, some creatures draw attention to themselves to warn predators that they are distasteful or have an unappetizing smell.

For instance, fireflies and glow worms are nocturnal and soft-bodied, making them easy prey, but their warning lights tell predators that they have a bad smell and taste. 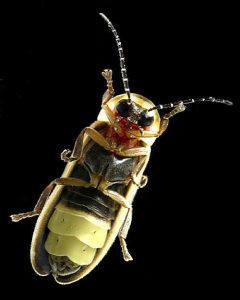 (Make your own glowing pool)

Some creatures look just like another natural object, helping them blend in to their surroundings and protect them from predators.

The buff-tipped moth contracts its wings so it looks like a piece of a broken stick. The yellow patches at the end of the wings even help it look freshly broken from a branch. 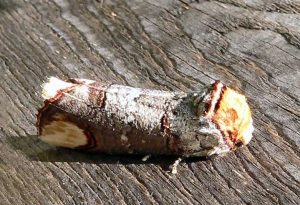 Creatures that use protective mimicry look so close in appearance to other creatures that they could be mistaken for them, even though they may not belong to the same family or order.

The hover fly mimics a bee so that predators will think it has a stinger, but it doesn't.

Photo of an American hover fly by Calibas, via Wikimedia Commons

(10 children's books all about nature)

The great plains toads at the Dickinson County Nature Center are named Al and Wally. Wally is named after Alfred R. Wallace (read more about him here), and Al is named after Iowa-born conservationist Aldo Leopold. Leopold was born in 1887 in Burlington and spent much of his youth in the Iowa outdoors, inspiring him END_OF_DOCUMENT_TOKEN_TO_BE_REPLACED

Teddy the ornate box turtle at the Dickinson County Nature Center is named after former president and conservationist Theodore Roosevelt. Roosevelt, whose nickname was Teddy — even though he didn’t like it, was born in 1858 in New York City. He grew up homeschooled due to medical conditions and grew a passion for animals during END_OF_DOCUMENT_TOKEN_TO_BE_REPLACED

How animals survive the winter

Humans often hole themselves up in their houses to survive the winter in front of the fire with hot chocolate. However, animals have to survive the frigid chill outside in the elements, and they have different ways of dealing with the change in seasons. Let’s take a quick look at how these Iowa animals survive. END_OF_DOCUMENT_TOKEN_TO_BE_REPLACED

Insects are beneficial. For some reason, most people grow up thinking “Ew” whenever they think “Insect.” However, the vast majority of insects are actually beneficial to humans and the environment. Even those that we think of as annoying, such as mosquitoes, can actually be beneficial in some way. Mosquitoes are actually pollinators. A type of END_OF_DOCUMENT_TOKEN_TO_BE_REPLACED

You see a black-and-orange butterfly flitting around, but it looks too small to be a monarch butterfly. This butterfly has very similar markings, except for the black line across its hindwing. What could it be? It’s a viceroy! 1. Viceroys are mimics. Viceroy butterflies mimic monarch butterflies, and it was long thought that was because END_OF_DOCUMENT_TOKEN_TO_BE_REPLACED

What animal ambassador are you?