Bees have so many issues to deal with.

There's a lack of nectar and pollen sources as wildflower populations diminish. Pesticides like neonictinoids are harming their nervous systems (read about that here). There's unexplained colony collapse disorder.

And then there are varroa mites.

So many invasive species have caused catastrophic effects on different parts of the environment, and varroa mites are an invasive parasite that many beekeepers are dealing with. The varroa bee mite (Varroa jacobsoni) was first discovered in the early 1900s but was not found in the United States until 1987, when it was detected in Florida. Because it is a relatively new parasite to European honeybees, originating on Apis cerana instead of Apis mellifera, European honeybees do not have as much resistance to them. Some beekeepers are looking at keeping Russian honeybees which have a higher tolerance for varroa mites than other subspecies.

Mites travel from hive to hive on adult bees. When a drone is out looking to mate or a worker bee is out foraging, the mite can drop off onto a plant and then climb on to the next bee that stops there or it can transfer from bee to bee while they are near each other. Robber bees can also transport varroa mites while stealing food from smaller hives.

Varroa mites are deadly to honeybees. They are an external parasite similar to a tick to humans --- imagine a tick the size of your first on your chest.

Varroa mites have eight legs and are reddish-brown with oval-shaped bodies that are large enough to see without a magnifying glass. 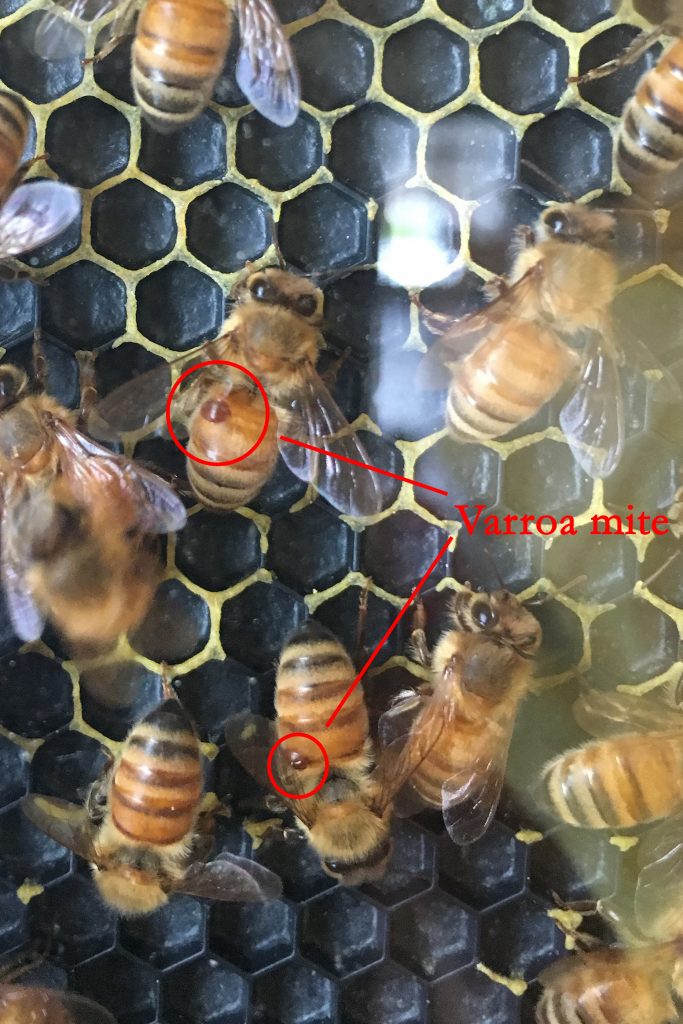 First, mites develop on drone brood in particular. A female will go into the brood cell before it is capped, and then when it is capped, she will begin to feed on the larva. At the same time, she lays eggs which also hatch, develop and mate while feeding on the larva. This larva will develop into an unhealthy adult with a weakened immune system or even with deformities.

Varroa mites also parasitize adult bees, breaking through the bee exoskeleton and surviving off of the bee's blood. This will weaken the immune system and may kill the bee. Even if the mite dies or leaves the bee, it will leave behind a hole in the exoskeleton that the bee cannot heal, therefore ensuring the bee's eventual death.

When caught early, varroa mites can be treated in a variety of ways, but like many invasive species, they are difficult to completely get rid of. The best way to control invasive species is to prevent them from spreading in the first place!

Read other blogs in the What's Happening in the Hive? series:
How a queen develops
Festooning bees
Drying down honey
Why aren't there any drones?

Environmentalists have been watching and waiting as new invasive species begin to take hold and move across the country and across Iowa. Jumping worms, the brown marmorated stink bug, the gypsy moth and the spotted lanternfly. Let’s take a look at a few of these up-and-coming invasives. Jumping worms Most earthworms are not actually native END_OF_DOCUMENT_TOKEN_TO_BE_REPLACED

A monarch butterfly chrysalis is usually a brilliant color spotted with golden dots. However, sometimes something goes wrong — and one day, we spotted a chrysalis that was beginning to turn brown. At the bottom of the container that the chrysalis was in inside of our monarch enclosure in Pollinator Paradise were three brown, egg-shaped END_OF_DOCUMENT_TOKEN_TO_BE_REPLACED

All kids use pencils at school, but many times those pencils are plain yellow and don’t allow for much inspiration. We took pencils to the next level with our bee pencil toppers at the 2019 Bee & Butterfly Festival, and now you can make your own. Simply click here to download a free PDF template END_OF_DOCUMENT_TOKEN_TO_BE_REPLACED

In the monarch enclosure and in the wild, we have come across monarch butterflies that hatch with crumpled wings. That is a sign that the butterfly is infected with ophyrocystis elektroscirrha, or OE. As if these butterflies didn’t have enough to deal with — like excessive pesticide use, their lack of habitat and native food END_OF_DOCUMENT_TOKEN_TO_BE_REPLACED

“It looked like two bees were dead and other bees were picking them up and dragging them away. Do they do that?” When you watch a honeybee hive, you’ll see the honeybees doing what might seem like odd activities. I mean, why would they be dragging around a dead bee? There’s a perfectly rational explanation END_OF_DOCUMENT_TOKEN_TO_BE_REPLACED

A few years ago, we saw a mass of bees collected around the hole that led outside from the indoor bee hive. We thought the bees might be swarming — leaving the hive, which usually occurs when there are two queens raised and one leaves with half the hive — and were nervous that there END_OF_DOCUMENT_TOKEN_TO_BE_REPLACED

People often use the term bee when talking about any kind of buzzing creature outside — it could be a honeybee, a bumble bee, a mason bee, a sweat bee or even a wasp or yellowjacket. However, it’s important to differentiate between the different kinds of bees. That may be difficult since the U.S. has END_OF_DOCUMENT_TOKEN_TO_BE_REPLACED

The numbers of bees in the indoor beehive have gone down. But that’s pretty normal this time of year. It just means that our bees have entered winter mode and are getting ready to survive cold weather. Baby, it’s cold outside. As the weather cools down, a honeybee hive starts to change. One of the END_OF_DOCUMENT_TOKEN_TO_BE_REPLACED

Myth: Bees are mean. Truth: Bee are nice. Honeybees only sting as a last resort, because they die after stinging. That means, unless they feel threatened or think you are going to hurt the hive, they will leave you alone. Myth: Bees will keep stinging you. Truth: As stated above, honeybees will die after stinging END_OF_DOCUMENT_TOKEN_TO_BE_REPLACED