You've probably heard of the rut.

And if you're a deer hunter, then you most definitely have. However, there may be some facts about rut that you're not overly familiar with. 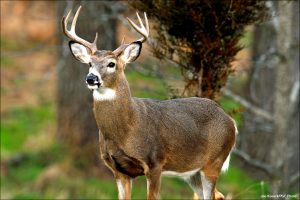 opens IMAGE file
1. Rut is a word for deer breeding season, not just the peak. It actually means all behaviors and activities associated with breeding season and can be broken into different phases.

Some categorize rut into three phases instead --- seeking, chasing and tending.

2. Rut doesn't begin because of temperatures but because of photoperiod, or daylight length. Deer are short-day breeders, so dwindling daylight signals to them it is breeding season.

4. Rubbing is not just to get rid of velvet. Buck antlers start out with a fuzzy velvet coating that is lost as testerone levels rise and daylight decreases. It may seem like they begin to rub trees to help their velvet come off, but rubbing truly is a way to spread scent, and some scientists think it also allows deer to visually communicate. Rubbing continues through the rut and is usually made by a buck rubbing his antlers or forehead on a tree.

Deer may also chew or lick branches to spread scent.

5. Scrapes are different from rubs. Bucks will paw a piece of ground to bare soil and will urinate in the spot.

6. Deer can perceive a variety of communicative scents. Urine, vaginal secretions, skin gland secretions, saliva --- deer can sense a lot about each other through scent.

Bucks can perceive chemical signals in doe urine through the nose but also through the vomeronasal organ. You might have heard of the Jacobson's organ in snakes (see a video about it here), and the vomeronasal organ is the same thing. Basically, there is a small opening near the center of the roof of a deer's mouth. Bucks will taste a doe's urine, closes his nostrils and flicks the scent of the urine into his vomeronasal organ. This organ then sends the chemical signals to the hypothalamus --- the part of the brain that controls reproduction.

7. Does breed once they reach a certain weight. You might think it's age, but does usually breed when they reach 70-80 pounds instead. 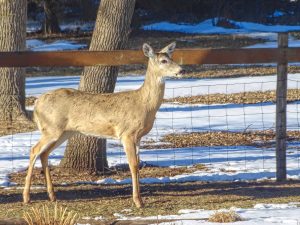 opens IMAGE file
8. Does can breed with multiple bucks. If a receptive doe breeds with a buck that is the run off by a more dominant buck while she is still receptive, she can breed multiple times. 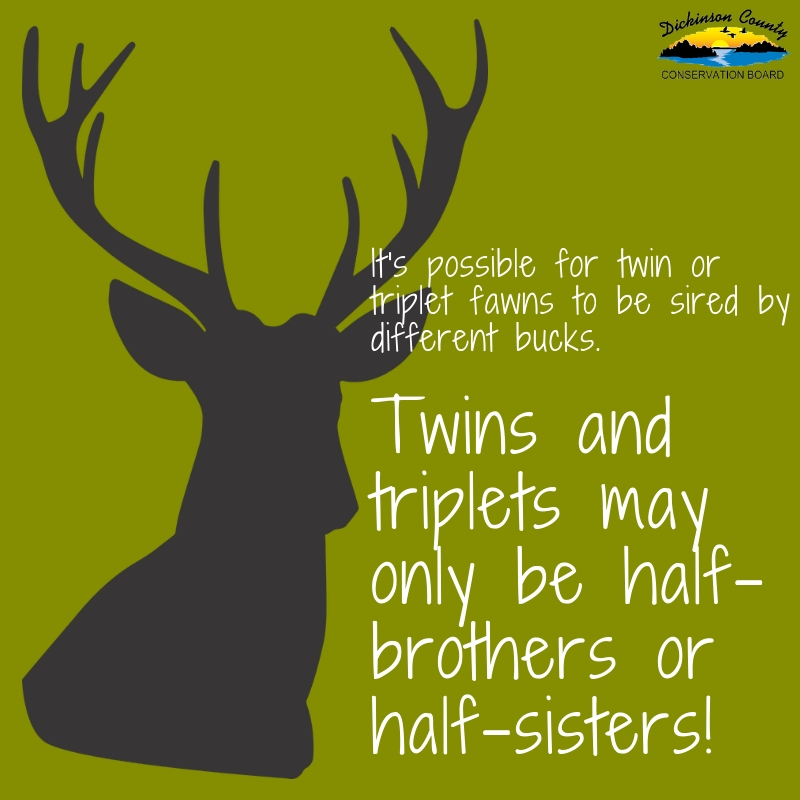 When walking through deep snow, it’s always easier when someone else leads. That person gets tired breaking the trail, but everyone who walks in his or her footsteps has an easier time of it. That is one reason that deer congregate during the winter. When they all use the same network of trails through the END_OF_DOCUMENT_TOKEN_TO_BE_REPLACED

1. Hollow hairs help them stay warm in the winter. Have you ever seen a deer that has snow on its back that doesn’t melt? It makes people shiver to think about walking around covered in snow — isn’t the deer freezing? However, it’s actually that frozen snow that shows just how warm a deer END_OF_DOCUMENT_TOKEN_TO_BE_REPLACED

I was scrolling through Pinterest when a video caught my eye. I don’t usually like watching videos, but it showed a neat craft where you color one picture, fold it like an accordion and depending on how you look at it, it becomes two pictures. “I can make that,” I thought. It took me a END_OF_DOCUMENT_TOKEN_TO_BE_REPLACED

Turkeys are odd-looking creatures. With their bumpy red heads, hanging flaps of skin around their faces and large tails, wild turkeys are quite a sight. The odd parts of their bodies also have interesting names and purposes. Let’s look at some of the body parts that make a turkey unique. What’s a snood? The snood END_OF_DOCUMENT_TOKEN_TO_BE_REPLACED

After European settlement, osprey were extirpated in Iowa. Many of the wetlands were drained and water quality lowered as the landscape changed, and these fishing birds of prey sought homes in other areas. However, in the early 2000s, after years of concentrated efforts to improve water quality in the Iowa Great Lakes area, osprey returned END_OF_DOCUMENT_TOKEN_TO_BE_REPLACED

Mammals are usually the creatures that garner oohs and aahs when people see them on hikes, in their yards or even in zoos and conservation centers. They’re usually furry and cuddly with adorable eyes. (Some are ugly though — read about them here) Iowa has 57 different common mammal species, and some are charismatic while END_OF_DOCUMENT_TOKEN_TO_BE_REPLACED

I remember when I first heard the word. Our environmental education coordinator was talking about nocturnal animals, and then stated that skunks aren’t always nocturnal but can also be crepuscular. “What?” Yes. Crepuscular. Cre-puss-cue-ler. It means simply that an animal is active at dawn and dusk. It’s not quite diurnal — meaning that it’s active END_OF_DOCUMENT_TOKEN_TO_BE_REPLACED