Not all finches have "finch" as part of their name, so you might be surprised just how many finches you have at your feeder.

However, most of these are pretty easily identifiable. That is not necessarily true with all finches. Some look quite similar in fact, such as the house finch, purple finch, pine siskin and even the American goldfinch, especially immature birds or winter males. 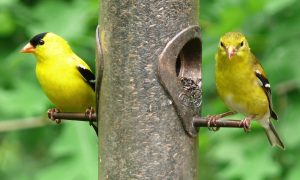 The state bird of Iowa is common at sunflower and nyjer feeders, and the breeding birds are easily identifiable. Breeding males are bright yellow with a black forehead, tail and wings striped with white. Breeding females have similar coloring but are more of an olive green color, and the black head patch is very faint. 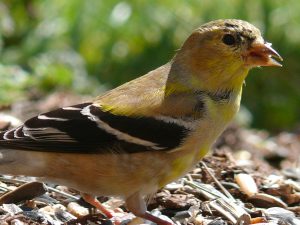 The wings are one of the keys that will help you identify goldfinches even when they are in non-breeding or immature colors, because the wings will have the two identifying white or pale wingbars.

The other key to look for is the unstreaked body. Non-breeding males are a drab, unstreaked brown. Immature birds are brownish colored, still without any streaking. 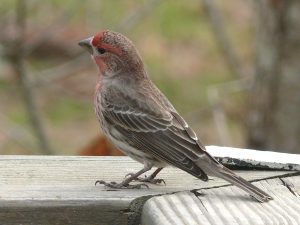 A house finch is another common visitor to bird feeders in northwest Iowa, and to feeders throughout the U.S. Males are easily identifiable because of their coloring, although their coloring can vary significantly. The male pigment comes from the food he eats when he is molting, resulting in varying redness and even orange or yellowish pigmentation.

Male house finches have a rosy face and upper breast, without any red on the back or the wing, and with much less red on the face than a purple finch. Females are a streaky brownish gray without definitive lines on their face. 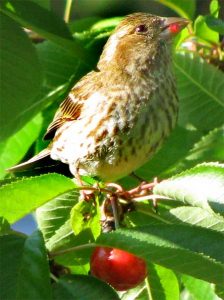 The house finch also has short wings which makes its tail look long and has a shallower notch on the tail than most finches. It has the typical finch conical beak, but its header is rather long and flat. 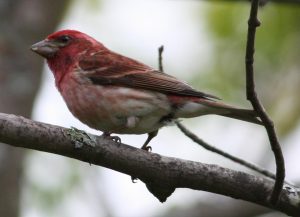 Many people confuse the house finch and purple finch, because they both have a reddish-purple color to their head and chest. The purple finch is a much more irregular visitor to northwest Iowa feeders, usually visiting black-oil sunflower seed feeders when it does stop by, and has some definitive differences to the house finch.

It has a darker head with more red than a house finch, and the red moves down the chest and mixes with white. The red color also goes into the wings and begins down the back, unlike a house finch.

A purple finch may be chunkier than a house finch and has a short, notched tail. 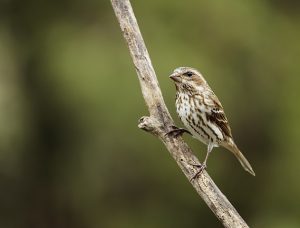 The female purple finch can be differentiated from the house finch because is is more coarsely streaked than a house finch. It typically has a whitish eye stripe and a dark line down the throat. 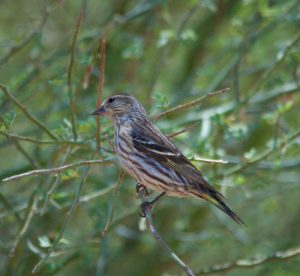 The pine siskin has less color than other finches. It is identified by its brown, streaked appearance with yellow edging on its wings and tail. It also has a sharp, pointed bill and the typical short-notched tail of a finch.

Pine siskins like thistle and nyjer seed, and they also prefer evergreen forests. 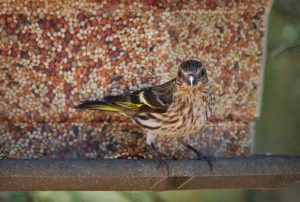 (Learn how to make your own pretend backyard birding binoculars here!)

Naturalist Ashley Hansen talks about how amazing bird eggs are — from the myriad of colors to the variety of sizes. You can learn even more about bird eggs by downloading our bird egg memory match game! Simply print off the pieces on cardstock, cut them out and match eggs with the adult bird. When END_OF_DOCUMENT_TOKEN_TO_BE_REPLACED

Bright birds with forked tails that swoop and dive around you — we see a lot of these in Kenue Park. They’re definitely swallows, but can you tell which kind? In Iowa, you’re likely to see four different kinds of swallows: Barn swallows, tree swallows, cliff swallows and purple martins. They’re quite similar, but relatively END_OF_DOCUMENT_TOKEN_TO_BE_REPLACED

A colony of white, gourd-like houses hang on a large pole outside of the Dickinson County Nature Center. Around them flies dozens of gliding, floating, flitting dark birds — purple martins. Local birder and owner of Bird Haven in Spirit Lake Wendell Hansen has cared for the purple martins for many years, and last June END_OF_DOCUMENT_TOKEN_TO_BE_REPLACED

Although purple finches have a non-breeding range throughout the eastern half of the U.S., they may be more of an irregular visitor to your feeder. Part of that could be due to competition with its look-alike, the house finch. (Learn how to tell them apart here) The house finch is native to the western U.S. END_OF_DOCUMENT_TOKEN_TO_BE_REPLACED

Everyone loves to feed the birds in winter. (Learn about one of Iowa’s winter birds: Dark-eyed junco) It helps the birds that are scavenging for food. It lets you get close to watch these fun, feathered friends. Bird watching is a good hobby to do from the warmth of your house on chilly days. You END_OF_DOCUMENT_TOKEN_TO_BE_REPLACED

There are birds at your nut feeder with black, white and red. What are they? The safe answer is, it’s a woodpecker. Adult males of six of the seven species of woodpeckers in Iowa have some combination of black, white and red, in fact. It might be a red-headed, red-bellied, downy, hairy, pileated woodpecker or END_OF_DOCUMENT_TOKEN_TO_BE_REPLACED

Birding is such a popular hobby because everyone can do it. Whether you are backyard birding, taking a hike or even boating, you can always catalogue the birds that you see. The he Dickinson County Nature Center features nests of some of the most common birds you might see right outside your window. (Grackles, blackbirds END_OF_DOCUMENT_TOKEN_TO_BE_REPLACED

More than 40 people attended last week’s Turkey Trot hike through Kenue Park and ended the Thanksgiving celebration by making their own pinecone bird feeders. If you didn’t attend, why don’t you grab the kids, head out on a wintry hike today, find some pine cones and make bird feeders of your own? (Okoboji seagulls END_OF_DOCUMENT_TOKEN_TO_BE_REPLACED