Bats can see about as well as humans.

However, they are nocturnal --- which means they are active at night --- and think about how well you can see at night.

(Read about nocturnal animals in Iowa.)

Without a light, can you see a mosquito? You might feel it bite you, but you sure wouldn't see it coming. Without a flashlight, can you find a moth fluttering its wings? We sure can't.

But bats still have to hunt, even when they can't see in the dark. So they use something called echolocation.

Echolocation is a high-frequency system similar to sonar --- like what a fisherman might use to see where fish are at underwater. Bats call in a pitch too high for adult humans to hear as they fly and listen to the returning echoes to build a sound map of their surroundings. 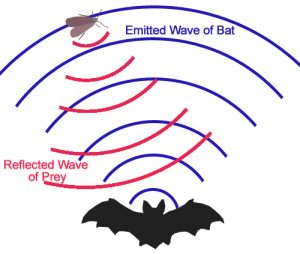 The animals can tell how far away something is by how long it takes the echo to return.

Different species of bats have different frequency ranges for echolocation, depending on their environment and what prey they eat. The species can be identified by its call using a bat detector. In fact, bats can be classified as shouting bats and whispering bats. Common bats in northwest Iowa --- big brown and little brown bats --- are shouting bats, because they make sounds at 110 decibels, about the same as a smoke alarm, because they hunt in open spaces. Whisperers usually hunt in more enclosed areas, such as forests.

Remember though, we can't hear bats hunt. Bat sounds, like from this big brown bat, that can be heard by humans are not echolocation sounds. Echolocation is a frequency too high for humans to hear.

Iowa has nine species of bats (you can read more about them here) and some of them hibernate while others migrate, and some migrate to hibernate. Iowa’s two most common bats, and those that you would find in Dickinson County, are the little brown bat (Myotis lucifugus) and the big brown bat (Eptesicus fuscus). Both END_OF_DOCUMENT_TOKEN_TO_BE_REPLACED

Bats are a hot topic around Halloween. (We love bats — read about how they use echolocation here.) And we love crafts that are both nature-related and fit into the season, so today we tested out a new bat craft. It’s simple, great for all ages and utilizes things you already have around the house. END_OF_DOCUMENT_TOKEN_TO_BE_REPLACED

Iowa is full of adorable mammals, so many that’s its hard to choose which are the cutest, but the state also has so uggos. Our environmental education coordinator likes to call these mammals non-charismatic, because ugly tends to turn people off. Although perhaps not the most attractive, the following mammals do still have a important END_OF_DOCUMENT_TOKEN_TO_BE_REPLACED

Mammals are usually the creatures that garner oohs and aahs when people see them on hikes, in their yards or even in zoos and conservation centers. They’re usually furry and cuddly with adorable eyes. (Some are ugly though — read about them here) Iowa has 57 different common mammal species, and some are charismatic while END_OF_DOCUMENT_TOKEN_TO_BE_REPLACED

I get odd looks when I tell people that I think bats are cute. This first summer that I worked at the Dickinson County Nature Center, we had a family bring in a little brown bat that they had found on their driveway. (If you find a bat on the ground, give us a call END_OF_DOCUMENT_TOKEN_TO_BE_REPLACED