"Does Iowa have any poisonous snakes?"

It's a question that comes up when visitors see our animal ambassador snakes, and the answer is "No."

You see, snakes in North American are not poisonous, they are venomous --- which means they inject a toxin rather than secreting a poison from the skin. It's rare for a snake to be both poisonous and venomous. Snakes in the genus Rhabdophis, found in Asia, are both venomous and poisonous. 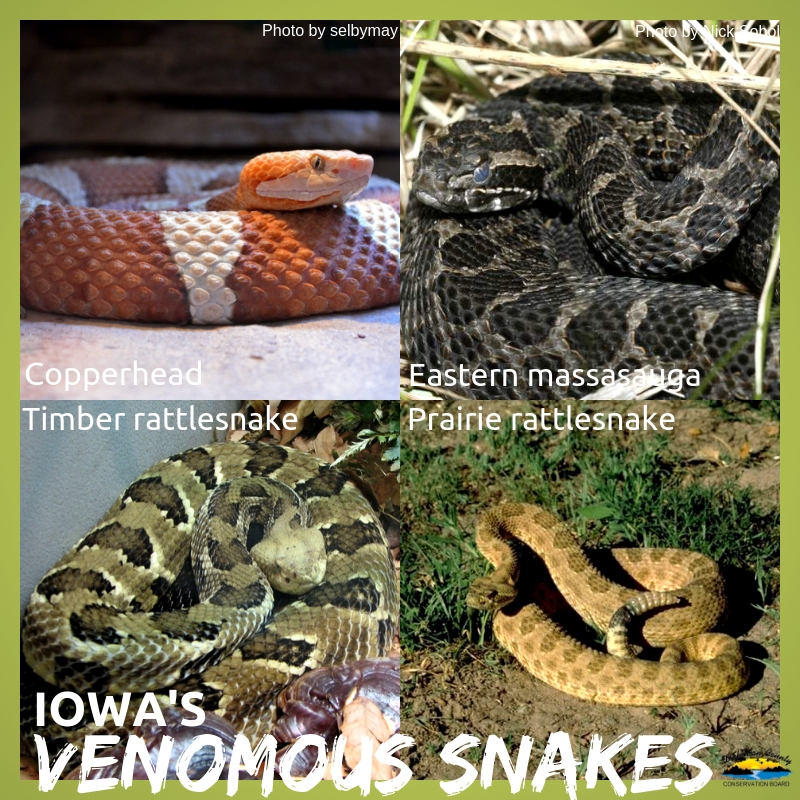 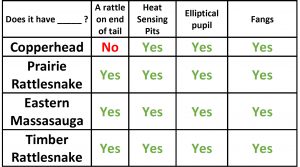 A rattle on the end of the tail

Three of Iowa's four native, venomous snakes have a rattle on the end of the tail. This is a tool the snake uses as a warning to those getting too close. However, a rattlesnake may not "hear" --- through vibrations --- humans approaching, so it may not rattle. That's why people should always be aware in an area with rattlesnakes.

A rattle is composed of hollow, interlocked segments made of keratin, and the snake uses muscles to vibrate the segments against each other. This creates the tell-tale sound.

Sight varies greatly among snakes, with some only being able to discern fuzzy shapes and a few colors to others with clear, but not sharp, vision. The ones with clear vision can track movement but cannot tell a mouse from a vole.

During hot summer months, several Iowa snakes become nocturnal. Being active and hunting at night is far less energy expensive for the energy conservative snake. So, if so many are active at night, how do they hunt so effectively? Non-venomous snakes that switch to nocturnal activity rely on external light and their keen sense of smell to compensate for their not-so-sharp eyesight.

(Read about how snakes smell.)

However, venomous snakes have evolved to "see" very well at night. The venomous snake species of Iowa have special heat-sensing pits that sense infrared radiation --- the body heat of other animals. These pits are located on each side of the snake's head, between the eye and the mouth.

(Watch how the nature center snake's eat on our Videos page.)

Many of these signs of venomous Iowa snakes are only noticeable up close, so it is always best to be aware of where you are walking and what wildlife might be in that area. Whether a snake is venomous or not, if you're unsure, just leave it alone. A great general rule for any wildlife is, enjoy the view, but let wild be wild.

(Watch our community relations coordinator attempt to hold a snake for the first time.)

Iowa has 28 different species of snakes, including four venomous species. (Read about the venomous snakes of Iowa here.) Most people are familiar with the garter snake, a common type of non-venomous snake, which are harmless to humans. Let’s take a look at the two kinds of garter snakes that are native to Iowa: Plains END_OF_DOCUMENT_TOKEN_TO_BE_REPLACED

Just because they work for a conservation board doesn’t mean that naturalists know everything. Just last week, naturalist Ashley Hansen was feeding Rosie the corn snake when she noticed a hole open up in the snake’s mouth while it was eating a mouse — the Dickinson County Nature Center snakes are fed mice that are END_OF_DOCUMENT_TOKEN_TO_BE_REPLACED

Make a bendable snake with pipe cleaner and beads

In honor of my big day today, holding a snake for the first time (you can see the video here), we made a fun snake craft. Whether you love snakes or hate them, this craft is cute and simple. You’ll need: Pipe cleaners Beads Googly eyes Liquid glue Start  by selecting what kind of head END_OF_DOCUMENT_TOKEN_TO_BE_REPLACED

If you find a snakeskin in the wild, it’s usually inside out! When it sheds, it slithers out of its old skin, like pulling a sock off your foot, so it ends up inside out! Watch the video for more information on how and why snakes shed their skin. Check out more of our animal END_OF_DOCUMENT_TOKEN_TO_BE_REPLACED

Crafts are so much more fun when the end result is actually something to play with rather than just hang on the refrigerator. This paper chain snake that can slither and wiggle is an easy and interactive craft for the snake lovers out there. And if you don’t have snake lovers, call it a caterpillar END_OF_DOCUMENT_TOKEN_TO_BE_REPLACED

Since this week’s blog post was about how snakes slither, I thought it only appropriate that this week’s craft also be snake related. I will pretty much guarantee that after you make this fun wrist cuff that your child will not take it off for the entire day. Or at least the next five minutes, END_OF_DOCUMENT_TOKEN_TO_BE_REPLACED

Besides their forked tongues, probably the main thing that creeps people out about snakes is their ability to move without legs or feet. (The reason a snake sticks out its tongue, and why it’s forked.) I have to say, before I started working at the Dickinson County Nature Center, back when I was still petrified END_OF_DOCUMENT_TOKEN_TO_BE_REPLACED

Why do snakes stick out their tongues at you? Have you ever seen this? You’ve been looking at one of the snake animal ambassadors at the nature center, and one of them sticks out her black tongue and flicks it around. She is smelling you! The snake’s tongue has a fork on the end of END_OF_DOCUMENT_TOKEN_TO_BE_REPLACED