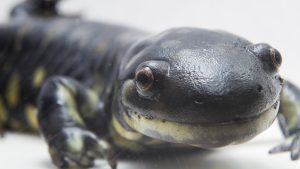 Sy the tiger salamander is huge.

The Dickinson County Nature Center has two tiger salamander animal ambassadors, named Manny and Sy, and they are members of the largest land salamander species in North America. Tiger salamanders usually grow 7-13 inches long, but Sy is around 14 inches in length from head to tail. That's one of the neat things about tiger salamanders --- they're all a part of the same species, but they have many variations within that species.

There are a lot more fun facts about tiger salamanders too. Let's take a look at some:

Their colors vary.
Tiger salamanders are typically colored like the salamanders at the Dickinson County Nature Center, with round, yellow spots over a black background. However, there are also tiger salamanders that have vertical yellow stripes running down the body, ones with golden blotches, and I've even seen some that look more green than yellow or black. Young tiger salamanders are olive green and get their adult markings a few weeks after hatching.

Some don't grow up.
Typical tiger salamanders live in moist areas in forests, grasslands or marshes. They live underground most of their lives, and people find them under rocks and stumps or in burrows. Sometimes you can also find them in piles of mulch or they fall into window wells outside of homes.

They're long-lived.
A typical tiger salamander life span is 10-16 years in the wild, perhaps because of their great ability to hide underground from predators such as badgers, snakes, bobcats and owls. Some have lived up to 25 years in captivity.

They have sensitive skin.
Check out this video for information on salamanders' permeable skin.

You can also check out a video about Sy and Manny on our Videos page or learn about more of our animal ambassadors at the links below!

People love to spot turtles in the wild. Snapping turtles, painted turtles, softshell turtles — it is so fun getting to see these truly unique creatures. Let’s celebrate turtles right at home by making a button turtle craft. You’ll need:A printed templateColored pencils, crayons or markersButtonsGlue Print out our button turtle template, and color it END_OF_DOCUMENT_TOKEN_TO_BE_REPLACED

Bog, marsh, swamp, fen. Often these words are used interchangeably, but in reality, each is its own type of wetland, which is a word used to refer to water-saturated landscapes. (Watch: What is a wetland?) A marsh is a wetland that is continually full of water. If you have been to the Florida Everglades, then END_OF_DOCUMENT_TOKEN_TO_BE_REPLACED

Shells, claws and tails — turtles can seem confusingly similar. However, if you know a few key differences to look for, you can soon confidently identify some common turtle species in Iowa. There are 13 turtle species known in Iowa, but we’re going to look at just five — Blanding’s turtles, painted turtles, red-eared sliders, END_OF_DOCUMENT_TOKEN_TO_BE_REPLACED

Did you know tree frogs’ last bone in their toes is shaped like a claw? Have you read about how about frogs’ bodies freeze during the winter and thaw in the spring? Do you know what a group of frogs is called? Click here to find out. Frogs are really interesting creatures, and many people END_OF_DOCUMENT_TOKEN_TO_BE_REPLACED

The Dickinson County Nature Center frog ambassadors are always a hit with kids when they come out during programs. That is often because they make the programs more exciting when they escape from the grasp of the naturalist with their squirmy, slippery bodies. But visitors also love to see their long legs, ability to jump END_OF_DOCUMENT_TOKEN_TO_BE_REPLACED

Because frogs are brightly colored, they tend to be looked on with more awe than toads. However, American toads have some pretty neat attributes when you get to know them. They taste bad. American toads are covered in red and yellow wart-looking spots that actually contain glands that secrete poison. Don’t worry, it won’t hurt END_OF_DOCUMENT_TOKEN_TO_BE_REPLACED