Kenue Park has three different ecosystems in its 70 acres, which makes it a great place to explore. You can see a wetland with rehabilitated trumpeter swans, prairie with native tallgrass species and a restored oak savanna.

Iowa is not really known for its forests, but before settlers arrived, trees definitely covered certain areas of the landscape. Usually the majority of trees survived in areas protected from fire, such as the Driftless area in the northeast part of the state, along major river corridors and on the eastern edge of large lakes where wildfires moving west to east could not reach.

Trees that survived in an ecosystem dominated by tallgrass prairies included primarily oak species, because their thick bark makes them fire tolerant, and areas where oaks dominate are not called forests --- where dense stands of trees grow tall and narrow with little direct sunlight reaching the ground --- but are called savannas. Savannas are identified by broadly-spaced, wide-canopied trees. 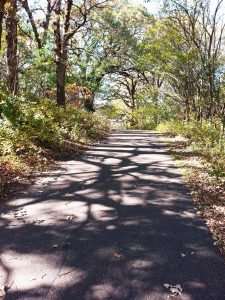 As settlers moved west across the prairie, they brought with them fire suppression against natural wildfires that altered the ecosystem dynamic and allowed eastern species to grow and survive. Green ash, eastern red cedar and box elder trees soon began to compete with oaks for space. Exotic buckthorn and bush honeysuckle also could then take hold with the absence of fire from the landscape.

However, the oak savanna in Kenue Park has been restored back to its original ecosystem and is being managed by the Dickinson County Conservation Board. Restoration began with the removal of invasive trees and other selective tree removal to allow more sunlight through to the prairie below. Diverse native prairie seeds were planted below the canopy to provide wildlife habitat, improved water quality and ecosystem value. Prescribed fires have also been added to the area. Historically, fire passed through every one-three years, so controlled burns will also run through the savanna periodically to promote a healthy and diverse prairie ecosystem.

Healthy oak savannas are an important part of a healthy Iowa landscape for a variety of reasons. Acorns produced by abundant oak stands are a significant source of food for wildlife. They are also home to a diverse mix of large mammals such as deer --- historically, they were also home to elk, wolves, buffalo and mountain lions.

As a boundary between forests and prairie, oak savannas also are home to many small creatures: Owls, turkeys, bats, squirrels, rabbits, frogs, snakes and turtles. Butterflies, including the monarch butterfly, also thrive due to the diverse mix of prairie flowers that blanket the ground and are protected by the tree canopy above. 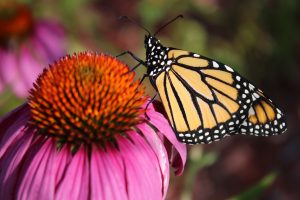 Kenue Park features not only beautiful habitat but also plenty of fun. Make sure to stop by year-round for geocaching, walks along mowed trails, disc golf, the Nature Playscape or check out the Dickinson County Nature Center!

Native prairie plants make wonderful habitat for wildlife like voles, turkeys, rabbits, ground squirrels, hawks and foxes. They provide both habitat and food sources for tiny creatures such as monarch butterflies, bumblebees and milkweed beetles. They are beautiful to look at. However, they are also important in a way that we can’t see. Deep down END_OF_DOCUMENT_TOKEN_TO_BE_REPLACED

Leave behind your nature art

Andy Goldsworthy is an intriguing nature artist who makes art, takes a photo and then leaves his art behind. (See some of Goldsworthy’s art here.) From piles of leaves that look like three-dimensional pits to rocks balanced in arches, his art inspires you to head outside and see what you can make with the items END_OF_DOCUMENT_TOKEN_TO_BE_REPLACED

What is the fuzzy stuff on my oak leaves?

You picked up a brown bur oak leaf and get grossed out that it looks like it’s molding. But those fuzzy spots on the leaf aren’t mold; in fact, they’re galls. A gall is a growth on a plant that develops due to insects that majority of the time. A female gallmaker insect — of which END_OF_DOCUMENT_TOKEN_TO_BE_REPLACED

The scent of fall is in the air. To me the scent of fall means dry leaves, wood smoke and a hint of chill to the air. Take a breath and it awakens the spirit. My eyes open wider and search for the beautiful change of colors. My lungs take in the sweet aroma. On END_OF_DOCUMENT_TOKEN_TO_BE_REPLACED