The Dickinson County Nature Center's bunny animal ambassador, named Bindi, is actually a pet rabbit species. However, this mini rex looks quite a lot like the native rabbit in Iowa, the eastern cottontail. They both have a fluffy white tail, long ears, a brown coat with lighter colors in the undercoat and dark eyes. 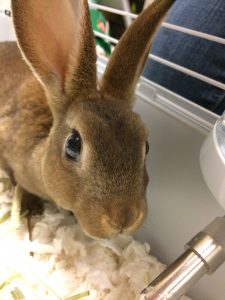 There are actually species of rabbits on all continents, except Antarctica, and about half of all rabbit species live in North America. In Iowa, we have only one rabbit species, the eastern cottontail (Sylvilagus floridanus). Its similar relative, the jackrabbit, is a hare, not a rabbit.

We see cottontail rabbits in our yards, parks, gardens and fields, so let's learn a little bit more about these adorable creatures.

1. Fast on their feet
Cottontail rabbits are prey for a variety of predators --- coyotes, owls, hawks, foxes, skunks, raccoons, snakes, weasels, opossums, cats and dogs. They usually freeze at the first sight of danger and run as a last resort, but when they do run, they can run fast. Cottontail rabbits can run up to 18 miles per hour for a half mile, and they run in a zig-zag pattern to confuse predators.

2. (Almost) 360-degree vision
Eastern cottontails have eyes that protrude a bit from their heads, giving them almost 360-degree vision. However, they have a blind spot directly in front of them that is about 10 degrees wide.

4. Ever-growing teeth
Cottontail rabbits' teeth never stop growing. The tough grasses they eat help to wear the teeth down continually to make sure that they don't get too long. Their teeth can also talk for them. Rabbits make a purring noise, a sign of happiness, by grinding their teeth. They can actually make several vocalizations, but they often don't in order to avoid predators.

5. Babies, babies and more babies
Male rabbits are sexually mature at only one month old, and females as early as four months. A female can produce a litter of up to eight kits, or kittens, every 30 days, although the average is four-five kits per litter. The mother rabbit is fertile again within 24 hours of giving birth, and she can lay as many as five litters in one breeding season. 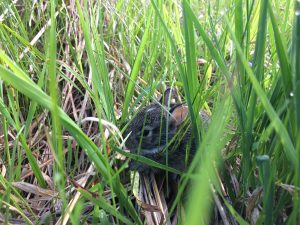 The reason rabbits have so many offspring is because most are lucky to live one year. Rabbits have a potential to live eight-10 years, but at least 50 percent don't survive to leave the nest. Some statistics say as few as 15 percent survive one year.

(A quick guide to finding a baby animal)

6. Yummy greens
Many people aren't a fan of eating greens, often the complaint is that they are boring. However, rabbits have 17,000 taste buds on average --- humans have 2,000-8,000 --- so they can sense a larger array of flavors. Eastern cottontails feed on buds, clover, grasses, dandelion heads, flower blossoms, legumes, lettuce and even fruit --- or whatever is yummy in your garden!

7. Stealth
Rabbits are crepuscular, meaning they are active at dawn and dusk, because they are most likely to avoid predators during these times.

(Learn more about what it means to be crepuscular.)

People are generally so kind-hearted when it comes to baby animals. You might see a group of ducklings walking around without an adult and just want to help them, out of the goodness of your heart. We love that people want to help animals, but often the best thing to do is leave wildlife alone. END_OF_DOCUMENT_TOKEN_TO_BE_REPLACED

My husband and I keep opening up our mud room door to see an eastern cottontail rabbit darting away, and any fresh snow reveals bunny tracks on our concrete patio. “Why does it keep sitting here?” My husband asked me. “I don’t know, maybe trying to keep out of the wind?” We started to discuss END_OF_DOCUMENT_TOKEN_TO_BE_REPLACED

Bindi, named after conservationist Steve Irwin’s daughter, Bindi Irwin, is the newest animal ambassador at the Dickinson County Nature Center as of August 2018. In honor of her arrival, today’s craft is bunny-themed! (Learn about cottontail rabbits) To make this adorable bunny bookmark, you’ll need: An envelope, a used one is fine Scissors Glue Googly END_OF_DOCUMENT_TOKEN_TO_BE_REPLACED

Mammals are usually the creatures that garner oohs and aahs when people see them on hikes, in their yards or even in zoos and conservation centers. They’re usually furry and cuddly with adorable eyes. (Some are ugly though — read about them here) Iowa has 57 different common mammal species, and some are charismatic while END_OF_DOCUMENT_TOKEN_TO_BE_REPLACED

A quick guide to finding a baby animal

You see a baby bunny in the yard. It looks at you with wide eyes and freezes as you approach. Oh no, an orphan bunny! You think, kindheartedly. The truth is, though, that bunny is fine on its own. In fact, most baby animals that humans stumble across and try to “help” often don’t need help END_OF_DOCUMENT_TOKEN_TO_BE_REPLACED

The family is coming over for Easter Sunday, and you need something adorable to spruce up the table. Plus, you need something to entertain the gaggle of children that will be running around. (Another idea: Fold a simple origami fish) That’s where this simple toilet paper tube bunny craft comes in. It’ll give the kids END_OF_DOCUMENT_TOKEN_TO_BE_REPLACED