Iowa is full of adorable mammals, so many that's its hard to choose which are the cutest, but the state also has so uggos. Our environmental education coordinator likes to call these mammals non-charismatic, because ugly tends to turn people off. Although perhaps not the most attractive, the following mammals do still have a important place in the environment and are quite interesting. 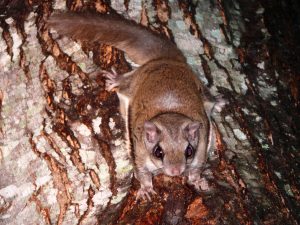 You might not have known that Iowa has a flying squirrel resident, and you may think it's ugly or adorable --- maybe ugly cute is a good term. It is the smallest squirrel in the state --- even smaller than an eastern chipmunk as well --- and is rarely seen because of its nocturnal habits. Flying squirrels don't actually fly but have a sort of wingsuit of extra skin between their front and back legs that allows them to catch wind and glide between trees. They are able to glide up to 100 feet if they start with enough height.

Flying squirrels are a species of conservation concern in Iowa, possibly due to habitat loss, and they are only residents in wooded areas. 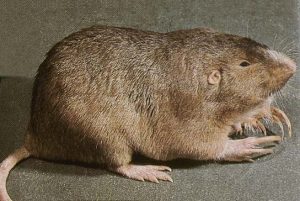 Since Iowa's only gopher spends most of its life underground, its rarely seen. Many people don't like gophers because they use their large claws to dig underground, but they are a species of conservation concern because so many people trap or poison them. They are actually an important part of the prairie ecosystem, because the soil disturbance they cause in natural areas is a site for germination of seeds and helps plant diversity thrive.

Iowa's largest mouse is extremely solitary, known to attack and kill members of its own species. These mice are smaller than a chipmunk but larger than deer mice and live in short grass prairies, grasslands, pastures and even sand dunes. 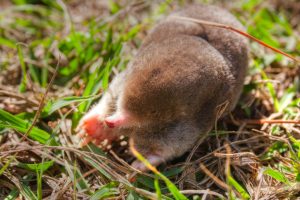 Their almost non-existent eyes and large claws are what make these animals not-so-cute, but they are also built for living their entire lives below ground. Their large claws help them excavate tunnels in damp, loamy or sandy soils to find earthworms, beetles and ants to eat.

Although their scientific name includes aquaticus, these mammals do not swim. They live near the surface of the earth in the summer and below the frost line in the winter.

You probably have never seen a masked shrew, because a full-grown adult is only the size of a human thumb, making it one of the world's smallest mammals. It has an extremely high metabolism, with a heart rate of up to 1,000 beats per minutes, and have to constantly search for beetles, grasshoppers, crickets and other invertebrates or small creatures in wooded and grassy habitats. Masked shrews can eat up to three times their body weight in one day.

Masked shrews live from Iowa to north of the Arctic Circle. 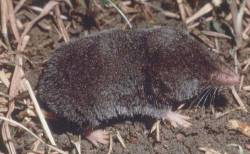 Short-tailed shrews can kill prey up to twice their body weight --- they weigh about an ounce. They are one of the world's few venomous mammals, chewing the venom into their prey such as worms, millipedes, insects, snails or other small mammals. They may even use echolocation to orient themselves.

These shrews don't have many predators because of their strong odor.

Elliott's short-tailed shrew, which is the same genus, is also a venomous mammal. 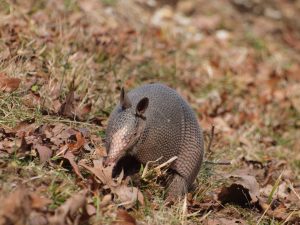 Some mammals wander into the Iowa from neighboring states, and one of the occasional visitors is the nine-banded armadillo. Their native habitat is the southern United States, up to Missouri, but has been expanding even further north and has been seen in southern Iowa. People in Iowa have seen them, because they tend to jump 3-4 feet high when scared, drawing attention from passersby.

Armadillos probably will not be permanent state residents though, because they can't live in temperatures below 20 degrees for long periods of time.

Many people ask if the hedgehog animal ambassador at the Dickinson County Nature Center is related to a porcupine. However, hedgehogs and porcupines aren’t actually related at all. There are 17 different species of hedgehogs, and their closest relations are actually shrews and moles. There are more than two dozen species of porcupines in the END_OF_DOCUMENT_TOKEN_TO_BE_REPLACED

During the autumn season, you’ll see acorns and other nuts falling from trees as the trees get ready to go dormant — basically, sleep — during the winter. Many animals take advantage of this time and gather those nuts to eat during the winter, and you’ve most likely seen plenty of squirrels running around with END_OF_DOCUMENT_TOKEN_TO_BE_REPLACED

Although creatures in the weasel family are often just called weasels, they are actually split up into a variety of species. You might be seeing an ermine, otherwise known as a stoat or short-tailed weasel, (Mustela erminea), the least weasel (Mustela nivalis) or a mink (Mustela vison). If you see one, though, how do you END_OF_DOCUMENT_TOKEN_TO_BE_REPLACED

Mammals are usually the creatures that garner oohs and aahs when people see them on hikes, in their yards or even in zoos and conservation centers. They’re usually furry and cuddly with adorable eyes. (Some are ugly though — read about them here) Iowa has 57 different common mammal species, and some are charismatic while END_OF_DOCUMENT_TOKEN_TO_BE_REPLACED

Besides their forked tongues, probably the main thing that creeps people out about snakes is their ability to move without legs or feet. (The reason a snake sticks out its tongue, and why it’s forked.) I have to say, before I started working at the Dickinson County Nature Center, back when I was still petrified END_OF_DOCUMENT_TOKEN_TO_BE_REPLACED

We often get the question, “Do ospreys mate for life?” The answer isn’t quite clear. In general, yes, they do. However, they aren’t above choosing a new mate if theirs is not longer able to reproduce or is sick or injured. Like humans are considered monogamous but sometimes change partners, osprey do the same thing. END_OF_DOCUMENT_TOKEN_TO_BE_REPLACED