Mammals are usually the creatures that garner oohs and aahs when people see them on hikes, in their yards or even in zoos and conservation centers. They're usually furry and cuddly with adorable eyes.

(Some are ugly though --- read about them here)

Iowa has 57 different common mammal species, and some are charismatic while others aren't. Here are nine of the most adorable mammals in Iowa. At least in my opinion. 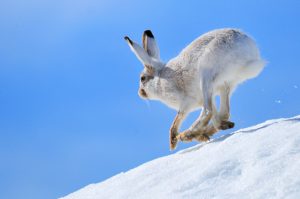 1. White-tailed Jackrabbit (Lepus townsendii)
Jackrabbits are larger than cottontail rabbits and have longer ears and legs. They are a gray-brown color but molt to all white in the winter season for camouflage. One of the fastest animals in the state, jackrabbits can run up to 35 miles per hour and bound up to 15 feet.

Jackrabbits are a species of conservation concern in Iowa, their population and range shrinking due to row crop cultivation and grassland decline. 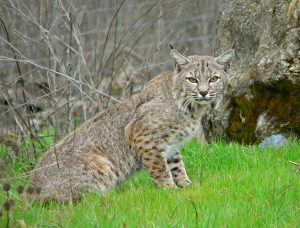 2. Bobcat (Lynx rufus)
We may think bobcats are adorable, but they are voracious predators feeding on rabbits, mice, voles and squirrels as well as deer, birds, snakes and other small animals. Although they are a carnivore, they do not pose a threat to human safety.

After being nearly extirpated --- extinct in a certain area --- due to habitat loss and unregulated hunting, the bobcat population in Iowa has grown naturally. The species now is considered game and does have a conservative harvest season. 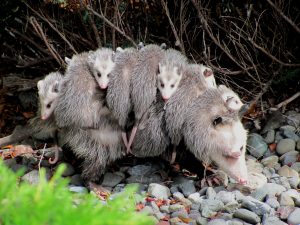 Photo by Specialjake via Wikimedia Commons

3. Virginia Opossum (Didelphis virginiana)
Some people may disagree with me, but I think that opossums are just adorable, especially the way the young cling to their mother's back. Female opossums can have two litters per year, as gestation is only 12-13 days. A mother gives birth to seven-21 young that get into her pouch to nurse for up to two months. After their eyes open, the young move around more, but stay on their mother's back during travel until they are three months old.

Opossums are found in every county in Iowa, and they are the only marsupial native to the United States.

(Opossums are often crepuscular instead of nocturnal.) 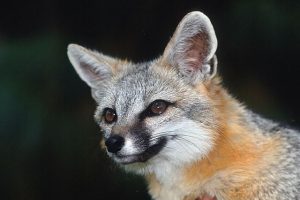 4. Gray Fox (Urocyon cinereoargenteus)
Adult gray fox are smaller than coyotes and red fox, weighing only 10-12 pounds. They have mostly gray fur with patches of reddish tan on the neck and body, and they also have a distinct black line down the top of the tail.

The gray fox is found throughout Iowa, although in very small populations. It is considered a species of conservation concern, but environmentalists don't seem to understand the reason populations are so low. 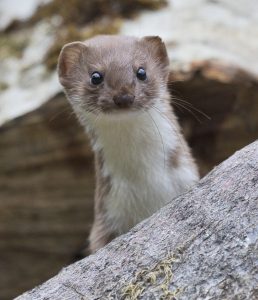 5. Least Weasel (Mustela nivalis)
Weasels tend to be secretive and wary, so many people don't see them. Plus, they are expert hiders. Least weasels have the ability to fit into holes less than an inch in diameter which helps them hunt voles. They also eat insects, birds and bird eggs.

Least weasels are a species of conservation concern in Iowa, although they are found in every county. 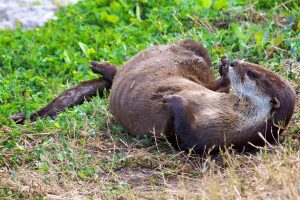 6. River Otter (Lontra canadensis)
Everyone loves otters, because they are so playful and cute! They are fantastic swimmers, primarily feeding on fish, frogs, salamanders, snakes, mussels, turtles, crayfish and young birds, and their pelts resist water due to the hair that can be as dense as 370,000 hairs per square inch.

River otters are native to Iowa but were nearly extirpated until reintroduction programs 1985-2003 helped to bring back populations with Louisiana-native otters. They are now found in every county. 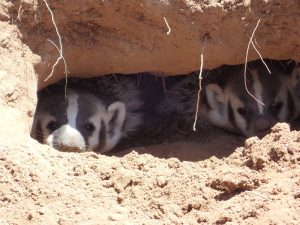 7. American Badger (Taxidea taxus)
Although they are known for their grumpy personalities, American badgers are still quite adorable. They are strictly carnivores, preying on rodents and rabbits, or mice when the other prey are not as abundant. They don't drink much, getting most of their hydration from prey, and they also don't have home boundaries. Badgers will move around to find prey.

Mostly nocturnal, badgers aren't seen very often, but they are found throughout the state of Iowa. 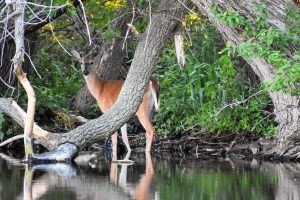 8. White-tailed Deer (Odocoileus virginianus)
Populus creatures, white-tailed deer are easily seen and much appreciated. They are often found in forests areas but also are seen in neighborhoods, prairies, and farm fields. The species has worked hard to assimilate as Iowa's landscape has changed throughout the 19th, 20th and 21st centuries. 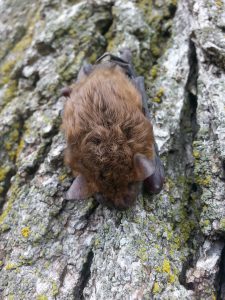 9. Little Brown Bat (Myotis lucifugus)
This is another one people might disagree with me on, but little brown bats are tiny, furry and have perky little ears --- usually all prerequisites for cute animals. Only the little brown bat and big brown bat are found in western Iowa, and they are also populus throughout the state.

Little brown bats are considered a species of conservation concern, because this and other cave-dwelling bats in the state have been impacted by White Nose Syndrome since the early 2000s, killing off many of the bats in the state.