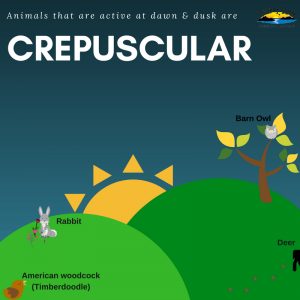 I remember when I first heard the word.

Our environmental education coordinator was talking about nocturnal animals, and then stated that skunks aren’t always nocturnal but can also be crepuscular.

Scientists think that crepuscular animals are this way because they are avoiding predators. A lot of animals that are looking to prey on other animals are active during peak daylight or evening hours.

For instance, the rabbit is a crepuscular animal because it has predators such as great-horned owls and coyotes that are nocturnal and also hawks and falcons that are diurnal.

Other animals choose to be active during the dawn and dusk hours to avoid competing with other similar species. This may be the reason that the barn owl is crepuscular instead of hunting against so many other owl species that are nocturnal.

Although many people haven’t heard the word crepuscular before, many animals we are familiar with are in fact crepuscular: Deer, skunks, opossums, American woodcocks, rabbits, barn owls and even domesticated dogs and cats.

Plus, crepuscular animals can be broken down even further. Those who are most active in the morning are called matutinal, and those most active at dusk are verpertine.

Through those words around the next time you see a deer cross the road, and I’ll bet people will be impressed.

We’ve talked about the large great horned owl, tiny northern saw-whet owl and adorable eastern screech owl, so this week we moved on to the state endangered barn owl. Barn owls are not federally endangered but their populations are low in Iowa. That could be because of habitat loss and prey loss because of END_OF_DOCUMENT_TOKEN_TO_BE_REPLACED

Learning about nature and animals is so interesting, because humans seem to have a desire to divide things into categories, and for those categories to be neat and clear. When learning about butterflies and moths, we want to know how to tell the difference. There are general differences, but there seems to be an exception END_OF_DOCUMENT_TOKEN_TO_BE_REPLACED

Kids learn pretty early that animals that are awake at night are nocturnal. The word for the rest of us that are awake during the day, though, doesn’t seem quite as well known. Humans and many animals are what is called diurnal. Diurnal creatures wake and sleep with the rising and the setting of the END_OF_DOCUMENT_TOKEN_TO_BE_REPLACED

We call them possums, but Iowa actually has opossums. These adorable creatures live in the western hemisphere and can refer to more than 100 species of animals. Possums are actual creatures as well. There are about 70 different species of possums in Australia, including the pollinating honey possum — read about that here! Opossums are END_OF_DOCUMENT_TOKEN_TO_BE_REPLACED

1. Hollow hairs help them stay warm in the winter. Have you ever seen a deer that has snow on its back that doesn’t melt? It makes people shiver to think about walking around covered in snow — isn’t the deer freezing? However, it’s actually that frozen snow that shows just how warm a deer END_OF_DOCUMENT_TOKEN_TO_BE_REPLACED

The Dickinson County Nature Center’s bunny animal ambassador, named Bindi, is actually a pet rabbit species. However, this mini rex looks quite a lot like the native rabbit in Iowa, the eastern cottontail. They both have a fluffy white tail, long ears, a brown coat with lighter colors in the undercoat and dark eyes. There END_OF_DOCUMENT_TOKEN_TO_BE_REPLACED