You see a little critter scurrying around the garden, its back striped dark brown and white.

A chipmunk? A ground squirrel?

The species often get confused, because they are about the same size --- 8-11 inches and 5-9 ounces --- and they both burrow. However, there are some key ways to tell these creatures apart.

The eastern chipmunk (Tamias striatus) has seven stripes on its body --- a single black stripe running down the middle of its back and three stripes on each side going black, white, black. The stripes do not extend onto the head. The thirteen-lined ground squirrel (Spermophilus tridecemlineatus) has just that --- 13 lines. It has seven dark stripes separated by six lighter ones, every other of which looks like dash marks or dots. The thirteen-lined ground squirrel's stripes extend onto the top of its head. 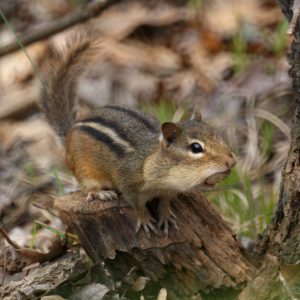 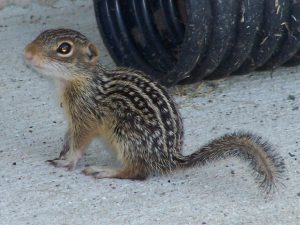 Chipmunks have rounded, erect ears, whereas ground squirrels have short ears that do not even stick out above the head.

Chipmunks have fuzzy, bushy tails. They often run with their tails held high. The thirteen-lined ground squirrel has a long, streamlined tail that is usually low to the ground as it moves along.

Chipmunks are found in deciduous forests or shrublands naturally, although they also live in suburban and urban areas where there is abundant cover. The thirteen-lined ground squirrel is a grassland creature, natively found in the prairies of the central U.S. They have also adapted to urban and agricultural development.

Chipmunks are great climbers, although they don't climb trees incredibly often. They can also scale some buildings. 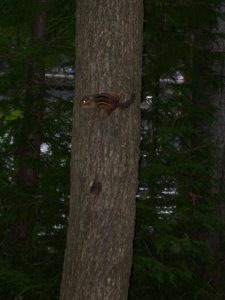 Thirteen-lined ground squirrels, however, don't climb at all.

Now that you know the difference between an eastern chipmunk and a thirteen-lined ground squirrel, do you think you can tell apart and osprey and a bald eagle? Click here to learn seven differences between these birds of prey.

Many people ask if the hedgehog animal ambassador at the Dickinson County Nature Center is related to a porcupine. However, hedgehogs and porcupines aren’t actually related at all. There are 17 different species of hedgehogs, and their closest relations are actually shrews and moles. There are more than two dozen species of porcupines in the END_OF_DOCUMENT_TOKEN_TO_BE_REPLACED

During the autumn season, you’ll see acorns and other nuts falling from trees as the trees get ready to go dormant — basically, sleep — during the winter. Many animals take advantage of this time and gather those nuts to eat during the winter, and you’ve most likely seen plenty of squirrels running around with END_OF_DOCUMENT_TOKEN_TO_BE_REPLACED

We had someone comment that Teddy the box turtle looked unhappy because he wasn’t in water. However, he’s a terrestrial turtle, so his kind lives the majority of their lives on land and not in the water. Yet, he isn’t a tortoise. Some people in Florida released tortoise hatchlings into the ocean. However, they aren’t END_OF_DOCUMENT_TOKEN_TO_BE_REPLACED

Although creatures in the weasel family are often just called weasels, they are actually split up into a variety of species. You might be seeing an ermine, otherwise known as a stoat or short-tailed weasel, (Mustela erminea), the least weasel (Mustela nivalis) or a mink (Mustela vison). If you see one, though, how do you END_OF_DOCUMENT_TOKEN_TO_BE_REPLACED

A gentleman called last week because he had heard a sound like someone running a finger along the teeth of a comb in his basement. He had found and captured a small frog and wanted to bring it to us for the winter. Frogs usually hibernate for the winter (read about that here), but this END_OF_DOCUMENT_TOKEN_TO_BE_REPLACED

I still remember the first time I heard a coyote pack howl as dusk began to settle on the Iowa Great Lakes area. On a walk at Kettleson Hogsback, the sun started to set above the calm shallow lakes, and a high-pitched howl began in the distance. Another answered it. And another. And another. My END_OF_DOCUMENT_TOKEN_TO_BE_REPLACED

People often use the term bee when talking about any kind of buzzing creature outside — it could be a honeybee, a bumble bee, a mason bee, a sweat bee or even a wasp or yellowjacket. However, it’s important to differentiate between the different kinds of bees. That may be difficult since the U.S. has END_OF_DOCUMENT_TOKEN_TO_BE_REPLACED