There are seven known families of bees worldwide, and six live in North America: Andrenidae, Apidae, Colletidae, Halictidae, Megachilidae and Melittidae. The family Stenotritidae only lives in Australia.

With several genus in each family and one to more than 100 species per genus, that is thousands of bees that are native to North America. To put that into perspective, there are only seven species of honeybees, and yet, when people think of bees they often think of honeybees first.

However, honeybees do have native relatives in the Apidae family. First and most notable are bumblebees. 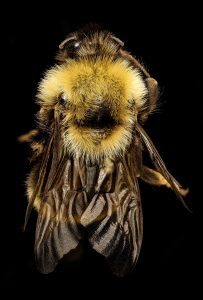 Bumblebees are in the genus Bombus. Worldwide this genus has about 263 known species, and the U.S. and Canada have documented 50 species. These bees are social, living in hives, but their colonies are annual. This means that the queen bee is the only one in the hive that survives through winter. She then lays eggs and creates a new hive each spring.

Bumblebees nest in rodent holes, under plant debris at the ground surface, in bird nest boxes, or in outbuildings that provide insulation.

They are fantastic pollinators because they are able to sonicate, otherwise known as buzz pollinate, during which they shake out large amounts of pollen in one flower visit. They play a vital role in the pollination of many agricultural crops, including apples, cherries, plums, currants, gooseberries, tomatoes, eggplants, blueberries and cranberries. Many of these crops require sonication to pollinate.

This genus also has some interesting members called cuckoo bumblebees. Instead of laying their eggs in the nest and then leaving the larvae to develop, cuckoo bees invade other nests, kill the queen and then use pheromones to suppress the workers. The suppressed workers then help with the rearing of the cuckoo bumblebee's larvae. There are also other cuckoo bees in the Apidae family, including the genuses Epeolus, Nomada and Triepeolus. 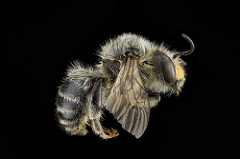 Anthophora is the genus for digger bees, of which there are 410 species in the world and 52 in the U.S. and Canada. These bees are solitary and nest in group soil embankments or wood. They typically line their nests with secretions from a special gland called the Dufour's gland that aids in the provisions for the larvae once it hatches. 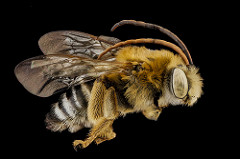 Long-horned bees can be distinguished by their light-colored blue or green eyes and the pale hair bands on their abdomen. Males have very long-horned antennae, like the photo above.

The 129 worldwide and 98 North American species of long-horned bees are solitary ground nesters. They also line their nests with a wax-like substance from the Dufour's gland. 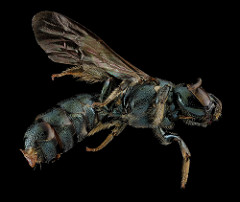 Small carpenter bees are just that --- small. They range from 2 mm to 9 mm in size, which makes them the perfect size to nest in hollow plant stems. People can help these tiny species by leaving flower and plant stems from the growing season throughout the fall and winter. In the spring, cut the top off of the old stems, about 15 inches from the ground. The new perennials will grow around these stems, and they will break down through the seasons.

There are approximately 366 species of small carpenter bees worldwide and 27 species in the U.S. and Canada, and they are solitary or semi-social. 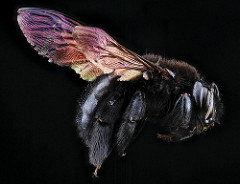 Large carpenter bees are significantly bigger than small Ceratina, ranging from 13-24 mm long. They are typically solitary, but sometimes non-egg-laying females work with each other and guard over the eggs of an egg-laying female.

These bees nest in rotting wood or manmade structures, excavating wood burrows to lay eggs in. They reuse the excavated wood fiber as brood cell divisions within the nest.

There are 372 species of large carpenter bees worldwide and 12 species in North America. 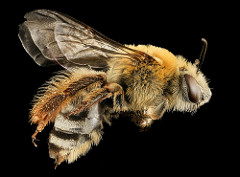 Squash bees can be distinguished from others by the orange hairs on the head, thorax and abdomen. They also have long, orange, pollen-collecting hairs on their legs.

All 15 species of squash bees live in North America, and they are all solitary. They specialize pollinating plants in the Cucurbita genus, such as squash and pumpkins. Since Cucurbita flowers are unisexual, they rely upon insects to transfer pollen from male to female flowers. Squash bees have been found to be effective pollinators because they seem to prefer to forage on male flowers and deposit pollen on female flowers.

Their nests are also usually created in the ground next to a forage source, such as squash flowers.

Do you love fruit? Then you love the blue orchard mason bee. Blue orchard mason bees (Osmia lignaria) are part of a family of bees that are solitary — meaning they live and breed individually instead of socially in a hive, like honeybees — and use clay to make partitions to their nests and to END_OF_DOCUMENT_TOKEN_TO_BE_REPLACED

One of our volunteers made coffee filter butterflies with her granddaughter, and in exchange, her granddaughter showed her how to make thumbprint bees. We thought they were so cute, we would try them ourselves. And just to make it more exciting, we did a variety of thumbprint invertebrates! All you’ll need is: White paper Washable END_OF_DOCUMENT_TOKEN_TO_BE_REPLACED

Most of the time bees can access pollen pretty easily on the anther of a flower, like in the video above; it is passively released by the flower and coats the hairs of pollinators that come to the flower to drink its nectar and gather its pollen. However, about eight percent of flowering plants have END_OF_DOCUMENT_TOKEN_TO_BE_REPLACED

The mining bees in the Andrenidae family are incredibly gentle bees. According to “Bees: An Identification and Native Plant Forage Guide” by Heather Holm, a park in Minneapolis is the home to thousands of Andrena nests each year, but most people have no idea that they are walking right over them. These bees are solitary END_OF_DOCUMENT_TOKEN_TO_BE_REPLACED

Do you love blueberries? Then you should love the genus Colletes of native bees! These are one of several types of native bees that collect pollen from both highbush and lowbush blueberry flowers. Colletes validus has an elongated, narrow head that helps it fit into the tight flower opening where it eats nectar and collects pollen that will be transferred END_OF_DOCUMENT_TOKEN_TO_BE_REPLACED

Mason bees might be the best pollinators of all bees. Instead of wetting pollen and putting it in pollen sacs like honeybees, mason bees are covered in hair that collects pollen as they move around, searching for nectar. They can certainly carry a lot of pollen and significant pollinators for apple, cherry and plum trees. (Try END_OF_DOCUMENT_TOKEN_TO_BE_REPLACED

We’ve all been outside drinking a pop at a picnic, when these little black-and-yellow creatures start flitting around and trying to get into the drink. “Sweat bees,” someone will say, shaking his or her head. “They’re so annoying.” Learning about bees as we put together the bee identification spinner for the new Pollinator Paradise addition, END_OF_DOCUMENT_TOKEN_TO_BE_REPLACED

If you didn’t have bad luck, you wouldn’t have any luck at all. Someone posted this about our osprey nest camera blowing down again this year. We feel kind of the same way. This poor camera has been blown down, hasn’t had enough sun, and when the camera did work last year the osprey chicks END_OF_DOCUMENT_TOKEN_TO_BE_REPLACED