The ice is finally gone!

We’ve been quite annoyed that after we arrived back our favorite fishing holes were all covered in ice, and then as soon as we began building our nest it snowed. And I mean snowed. And then a couple of days later it snowed some more.

I heard someone in the area read the forecast and flew to Florida, and I wish that I could hop a plane for a couple of weeks to avoid snow too. That’s a lot of effort to fly that far on my own wings though, so I hunkered down in a nearby tree grove and waited out that white stuff.

It’s been a couple of weeks since that happened though, and I’m feeling a bit better. We can now fish out of the lakes that we love, and we’ve been able to find some yummy meals. We have the nest built pretty well with plenty of sticks, some corn stalks and even a few feathers thrown in.

Now comes the time that we start to work toward having babies. Although we usually start laying our eggs around April 23 or so, we certainly weren’t going to risk them getting cold when it was still snowing, so we’re a little behind. The sun has been shining and warming the nest up though, so we’re getting excited to lay those first eggs.

I have been in and out of the nest a lot, because once I lay those eggs, I’m committed to keeping them warm. That means a solid five weeks of sitting on the nest. Although my mate will bring me food and will sometimes sit on the eggs to give me a little break, it’s never for long periods of time. I am taking advantage of this late nesting season to stretch my wings a little bit more. Plus, we’re still working on making the nest as full and comfortable as possible. 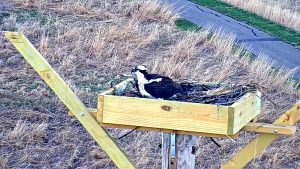 We have the camera on the nest now, and we will keep a close on it to see when eggs are laid. If you see them, let us know!