There is no such thing as a seagull. All gulls have proper names, none of which is sea.

We posted this Noon Nature Fact on our Facebook page last week and had several comments on it. I knew that there were lots of species of gulls, but honestly didn't realize that none were technically called seagulls until a volunteer brought in a newspaper article that concluded with this interesting factoid.

Looking up gulls, you'll find that many look similar. They have mainly white bodies with wings that are gray, some with black feathers on their tails. They also have orange or yellow bills that are slightly hooked on the end, great for eating fish.

However, if you look closer, there are definitely differences. Some have completely black heads, while others are completely white. Some have white legs, some orange, some black. The bonaparte's gull --- which winters in the southern U.S., migrates through the northern U.S. and breeds in Canada --- even has a black bill. 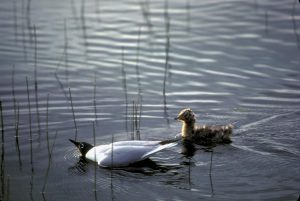 Like many birds, if you take a moment, you can see the subtle differences between species.

According to the Iowa Great Lakes Bird Checklist, created by the now disbanded Northern Iowa Prairie Lakes Audubon Society, the two commonly sighted gulls in the region are the Franklin's gull and the ring-billed gull. 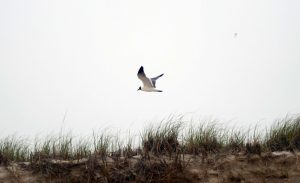 With a black head, you might think that it would be obvious when you see a Franklin's gull. However, some heads are darker than others, and when they fly as a flock overhead, most people wouldn't even notice this subtle characteristic. 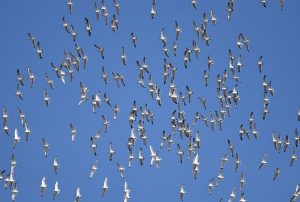 These gulls migrate through the middle of the U.S. to breeding grounds commonly in North Dakota, Montana and Canada. They love the Midwest because they will follow plows to eat exposed earthworms, insects and mice.

Franklin's gulls have floating nests that start to sink as the material on the water surface decays, so the parents continually add new nest material until one or two weeks before departing. Older chicks also add nest material from anything they can reach nearby. 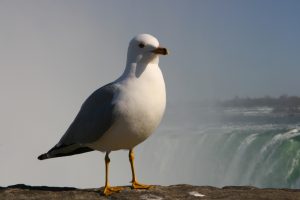 The ring-billed gull is found pretty much throughout North America, from Mexico all the way to northern Canada and are considered the gulls most likely to see far away from coastal areas. They like to stay in the interior of the U.S., near freshwater, so the Iowa Great Lakes is the perfect habitat for them.

A black band around its yellow bill distinguishes adult ring-billed gulls from other gulls.

These gulls are omnivores, eating fish, insects, worm, rodents, grain and even garbage, like French fries and other discarded human food.

Ring-billed gulls nest on the ground, near freshwater, on low, sparsely vegetated areas.

Some other gulls that you might spot in northwest Iowa that are uncommon but expected are the bonaparte's and herring gulls.

Naturalist Ashley Hansen talks about how amazing bird eggs are — from the myriad of colors to the variety of sizes. You can learn even more about bird eggs by downloading our bird egg memory match game! Simply print off the pieces on cardstock, cut them out and match eggs with the adult bird. When END_OF_DOCUMENT_TOKEN_TO_BE_REPLACED

Who doesn’t have empty toilet paper tubes? We all do. And if you don’t right now, you definitely will have some soon. Let’s use them for a fun purpose and turn them into adorable birds, and you can make whatever kind of bird you want. I chose a robin — my mom’s favorite — and END_OF_DOCUMENT_TOKEN_TO_BE_REPLACED

You may have noticed that as the seasons change, birds begin to look different. What was a bright eastern goldfinch in the spring becomes a duller hue in the winter. A duck that had vibrant breeding feathers earlier in the year now looks a little drab. That is because birds molt. Their feathers wear out END_OF_DOCUMENT_TOKEN_TO_BE_REPLACED

Two big white birds — rehabilitated trumpeter swans — live on the Kenue Park wetland, but last week we also spotted three more white birds. Egrets? Cranes? Herons? We were trying to figure out what they were but we couldn’t see their necks, because it was breezy and they had their heads hunkered down. However, END_OF_DOCUMENT_TOKEN_TO_BE_REPLACED

We have many wonderful volunteers at the Dickinson County Nature Center, and one of regular front desk helpers loves to bring in articles with interesting animal facts. The last article she brought in from “Smithsonian” magazine told that the highest bird flight ever recorded was by the Ruppell’s griffon, a vulture native to Africa. It’s END_OF_DOCUMENT_TOKEN_TO_BE_REPLACED

When people see the large nest inside the Dickinson County Nature Center and the big raptors on the outdoor nest during the summer, they often think they are bald eagles. Many people don’t realize that after being extirpated in Iowa, osprey populations have started to make a comeback in the 2000s. Each summer, osprey come END_OF_DOCUMENT_TOKEN_TO_BE_REPLACED

Birding is such a popular hobby because everyone can do it. Whether you are backyard birding, taking a hike or even boating, you can always catalogue the birds that you see. The he Dickinson County Nature Center features nests of some of the most common birds you might see right outside your window. (Grackles, blackbirds END_OF_DOCUMENT_TOKEN_TO_BE_REPLACED

I turned on the live web camera at the nature center last week and zoomed in on the two rehabilitated trumpeter swans on the wetland. The weather was warm, and it appeared the waterfowl were having a ball in the springtime temperatures. They dipped their necks down into the water and then bent them back END_OF_DOCUMENT_TOKEN_TO_BE_REPLACED