The song kept rolling through my head as I sat in beautiful South America, watching the waves roll on the Atlantic Ocean. My wings were just itching to start flying the 4,000 miles that would take me back to my beloved breeding grounds in Okoboji, IA. Some birds wonder why on earth we would leave the glories of South America to fly north each spring, but we really like the space. Talk with other osprey that breed in the Midwest, and it is just a better area with more room, food and nesting habitat. We like that when raising little ones.

It took a couple of weeks worth of travel, following the same path that I did when I came south for the winter.

(Learn more about how osprey migrate each season.)

When I got to Okoboji though, ah! It was snowing, and the beautiful lakes that I love to fish in still were white with ice. This is not what I expected when I came back from the warmth and sunshine of South America.

I watched where the other raptors were getting food and stuck with some other osprey and eagles by the Little Sioux River for a few days, munching on the fish we could find in the open water there.

Finally, I decided to fly back to Kenue Park, where my mate and I had nested last year, and there he was. What a handsome bird. My heart fluttered seeing him again after a long winter apart.

The I cocked my head a bit as I looked at our nest. It was empty. And it was lower. And it had some weird V-shape around it. 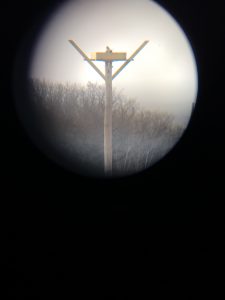 First view of the osprey through a scope

With an empty nest, it means that we have a lot of work to do. Now, we’re flying around finding the perfect sticks, corn stalks and other nest building materials to create the perfect home for our upcoming babies.

The osprey may notice a difference in their nest this year. Because of the issues with the osprey camera arm breaking in the past couple of years, staff at the Dickinson County Conservation Board came up with a solution to eliminate the flimsy arm on which the osprey camera was mounted and instead mount it right to the telephone pole that the nest sat on. The original nest was taken down for the camera to be mounted, and a second nesting pole and platform was added just about 20 feet from the camera.

The new nesting platform is a little bit shorter so the camera can look down into it, but it will not deter the osprey from nesting there.

On the new nesting platform is a V-shaped. These two pieces of wood act as perches for the osprey. They loved to perch on the osprey camera above their previous nest, so we expect these perches to be used quite frequently.

The web camera will soon switch over from the rehabilitated trumpeter swans on the Kenue Park wetland to the osprey nest. Stay tuned.

In the meantime, check out this fun timelapse video from when the utility company helped us erect the new pole.