The Iowa Great Lakes and the smaller lakes and wetlands in the area are starting to melt.

That means that birds that flew south to warmer areas for the winter are now flying back north to their summer breeding grounds.

Waterfowl are definitely on the move this month, and it's fun to see the birds that are moving through the area.

Here are seven species that you can easily identify and won't want to miss as they migrate through, or stay during this summer. 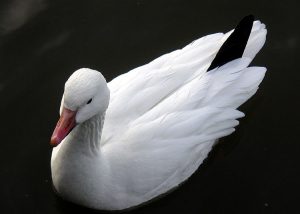 Snow geese winter throughout the southern U.S. and coasts, then fly north to the very top of Canada to breed. They will fly through Iowa in giant flocks, high overhead. They can be easily identified by their white bodies and black-tipped wings.

There is also a darker-colored variation of the snow goose, sometimes called blue geese. They have a white face, dark brown body and white under the tail. If a blue goose mates with a white goose, the babies will be dark. If two white geese mate, they will have white offspring. If two dark geese mate, they will have mostly dark offspring with possibly some white ones. 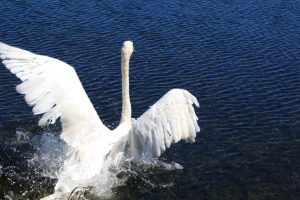 Two rehabilitated trumpeter swans live on the Kenue Park wetland year-round, with an aerator keeping some open water for them, but this time of year many are flying north to their breeding grounds in the northern United States, Canada and Alaska.

Trumpeter swans are the largest waterfowl native to the U.S., some weighing up to 25 pounds and a wingspan of up to 6.5 feet. That's longer than a really tall man is tall!

These swans are entirely white with black legs, and they stop in wetlands to eat or sometimes visit agricultural fields to find leftover corn.

(Watch the Kenue Park swans on the wetland during the winter.) 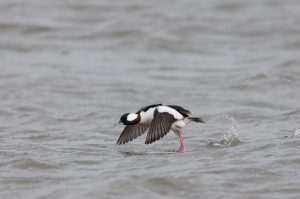 This migratory duck is fun to watch as it dives into the water to find vegetation growing at the bottom and then bobs back to the top to get air. Its head is a shiny green and purple with a large white patch.

At this time of year, the bufflehead is migrating back to breeding grounds in Canada and Alaska where it will nest in holes made by northern flickers and pileated woodpeckers. 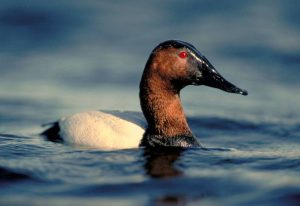 Another fun diving duck to look out for is the canvasback, known for the male's beautiful rusty red head. Like other diving ducks, it can be seen dipping below the surface of the water to find food and popping back up. They even have floating nests. 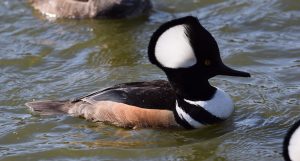 The hooded merganser gets its name because of its hood, or its beautiful crest of feathers. They migrate through and also breed in northwest Iowa.

Hooded mergansers are also diving ducks, but they nest in cavities. Females also often lay their eggs in other females' nests, called brood parasitism, similar to cowbirds, except that they only lay eggs in nests of their own species. 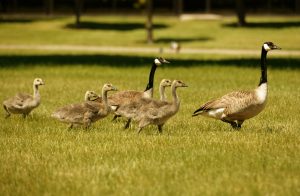 The technical name of this creature is the Canada goose, not the Canadian goose. It spends its time in the U.S. year-round and also breeds in Canada. Some geese are no longer going as far south in the winter, which scientists think is because there is more grain left in farm fields in the fall and winter. It could also be because of changes in hunting and weather. 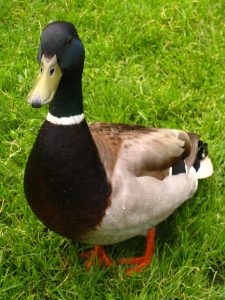 Mallards are considered dabbling ducks, which means instead of diving below the water, they will upend themselves to grab vegetation but they don't completely go underwater.

Mallard pairs are usually monogamous, staying with the same mate for their whole lives. The standard quack that we're used to is the sound of a female mallard. Males don't quack; they make a quiet, rasping sound.

Naturalist Ashley Hansen talks about how amazing bird eggs are — from the myriad of colors to the variety of sizes. You can learn even more about bird eggs by downloading our bird egg memory match game! Simply print off the pieces on cardstock, cut them out and match eggs with the adult bird. When END_OF_DOCUMENT_TOKEN_TO_BE_REPLACED

Who doesn’t have empty toilet paper tubes? We all do. And if you don’t right now, you definitely will have some soon. Let’s use them for a fun purpose and turn them into adorable birds, and you can make whatever kind of bird you want. I chose a robin — my mom’s favorite — and END_OF_DOCUMENT_TOKEN_TO_BE_REPLACED

Two big white birds — rehabilitated trumpeter swans — live on the Kenue Park wetland, but last week we also spotted three more white birds. Egrets? Cranes? Herons? We were trying to figure out what they were but we couldn’t see their necks, because it was breezy and they had their heads hunkered down. However, END_OF_DOCUMENT_TOKEN_TO_BE_REPLACED

We have many wonderful volunteers at the Dickinson County Nature Center, and one of regular front desk helpers loves to bring in articles with interesting animal facts. The last article she brought in from “Smithsonian” magazine told that the highest bird flight ever recorded was by the Ruppell’s griffon, a vulture native to Africa. It’s END_OF_DOCUMENT_TOKEN_TO_BE_REPLACED

It’s a big, white bird paddling on that body of water. But what exactly is it? Most likely, it’s a trumpeter swan if you’re in Iowa. The trumpeter swans is native to the state and is the biggest waterfowl native to the U.S., its wingspan reaching up to 8 feet — that’s taller than Yao END_OF_DOCUMENT_TOKEN_TO_BE_REPLACED

Birding is such a popular hobby because everyone can do it. Whether you are backyard birding, taking a hike or even boating, you can always catalogue the birds that you see. The he Dickinson County Nature Center features nests of some of the most common birds you might see right outside your window. (Grackles, blackbirds END_OF_DOCUMENT_TOKEN_TO_BE_REPLACED