Prairie skinks (Plestiodon septentrionalis) are common in Iowa, but you may never have seen one before. They are so tiny, that they blend in extremely well with their prairie surroundings. 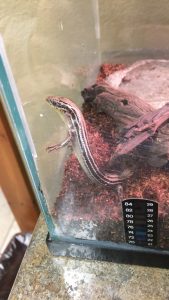 Some skinks are is a little smaller than a typical prairie skink because they only havea nub of a tail. That is actually typical with prairie skinks, who lose their tails on purpose when frightened by predators. Their detached tails continue to wriggle, distracting predators while the skinks get away. 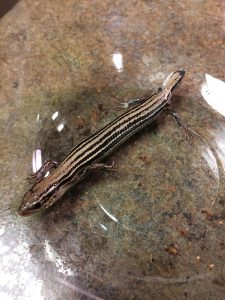 A skink's tail does regrow, but it is not as long or colorful as the original tail.

Prairie skinks have three wide tan or light brown stripes along their black back with two additional stripes on each side for a total of seven stripes.

They also look similar to five-lined skinks, which like their name suggests have five stripes on their backs, and six-lined racerunners, which have bright green, yellow or white stripes instead. 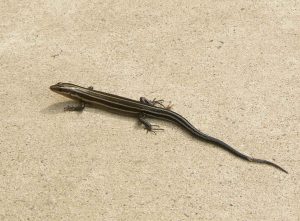 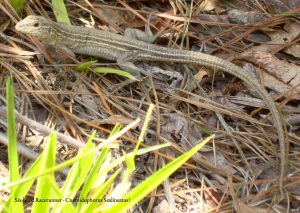 Prairie skinks can also be quite colorful. When they are young, they each have a bright blue tail, and during mating season, an adult male's head, neck and lips turn bright orange. It appears that Schnoodle is a girl because of that lack of bright coloring during mating season.

They are usually found along stream banks or in small forests and grasslands.

(Find out what animal ambassador are you?)

Iowa has 28 different species of snakes, including four venomous species. (Read about the venomous snakes of Iowa here.) Most people are familiar with the garter snake, a common type of non-venomous snake, which are harmless to humans. Let’s take a look at the two kinds of garter snakes that are native to Iowa: Plains END_OF_DOCUMENT_TOKEN_TO_BE_REPLACED

Why worms surface after rain

After it rains, people often step outside and think, “It smells like worms.” (The dead worm above looks like an S. Take the kids for a shape walk to see what else you might discover.) The smell is more likely caused by soil bacteria released after heavy downpours, but perhaps we think it smells END_OF_DOCUMENT_TOKEN_TO_BE_REPLACED

Sy the tiger salamander is huge. The Dickinson County Nature Center has two tiger salamander animal ambassadors, named Manny and Sy, and they are members of the largest land salamander species in North America. Tiger salamanders usually grow 7-13 inches long, but Sy is around 14 inches in length from head to tail. That’s one END_OF_DOCUMENT_TOKEN_TO_BE_REPLACED

Besides their forked tongues, probably the main thing that creeps people out about snakes is their ability to move without legs or feet. (The reason a snake sticks out its tongue, and why it’s forked.) I have to say, before I started working at the Dickinson County Nature Center, back when I was still petrified END_OF_DOCUMENT_TOKEN_TO_BE_REPLACED