Origami is one of those crafts that you just feel accomplished when it's completed.

It's a skill that you can share and show off, and this origami fish is a simple design that even children can do.

Fold the entire square up to make a rectangle. Unfold. 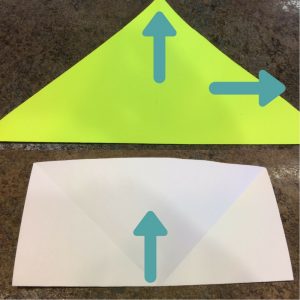 opens IMAGE file Push your finger in the middle to make the sides pop up. Then collapse the sides in until you have a small triangle. 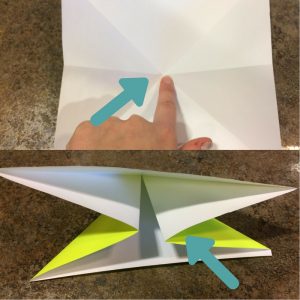 Turn the fish 90 degrees so it is facing sideways. Fold the bottom of the back triangle up to start to create the tail. Fold the top of the triangle down, crossing over the bottom fold. 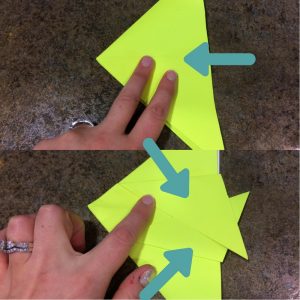 Flip the fish over and decorate! 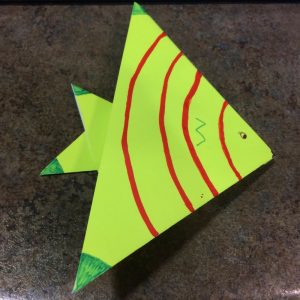 We’re bzzzzy bees at the Dickinson County Nature Center, and we’re continuously celebrating bees, butterflies, bats, hummingbirds and all of our pollinators at Pollinator Paradise. Once you see the live bees in the indoor beehive, crawl through the human-sized honeycomb, pollinate life-size apple trees and see all the delicious foods that pollinators help us with END_OF_DOCUMENT_TOKEN_TO_BE_REPLACED

The frozen Iowa Great Lakes are dotted with blue and black as ice fishermen set up their shacks, drill holes and search for life below the ice. And there is still plenty of life to be found, but how exactly do fish survive in those frigid temperatures? You can learn how ice is created on END_OF_DOCUMENT_TOKEN_TO_BE_REPLACED

We all love the lakes. That’s what makes Okoboji, Okoboji. But how much do you know about the lakes themselves? Did you know that Upper Gar Lake is the smallest lake in the Iowa Great Lakes at only 37 acres with an average depth of 3.5 feet? That is the height of the average 6-year-old! END_OF_DOCUMENT_TOKEN_TO_BE_REPLACED

It’s a fish-eat-fish world out there. OK, I know that’s not how the saying goes, but I think it applies in an area where lakes are the main attraction. Think about what’s going on beneath the surface of our lakes when we’re out boating, waterskiing and paddleboarding. Our fish are living the everyday lives, swimming END_OF_DOCUMENT_TOKEN_TO_BE_REPLACED

I am by no means an origami expert, but I always feel accomplished when I complete a new project. We’ve tried butterfly origami (you can find that blog entry here) and today decided to attempt making interactive origami — a leaping frog! Steps 1-4: Fold your paper hot dog, then crease the right and left END_OF_DOCUMENT_TOKEN_TO_BE_REPLACED

I thought I would try my hand at a paper butterfly today and give you some directions to try it out yourself! Step 1: Create a waterbomb base. Fold your square of paper in half, then in half the other direction. Unfold the paper and fold it into a large triangle. Unfold the paper. Flip END_OF_DOCUMENT_TOKEN_TO_BE_REPLACED