But they're not visitors. They don't even work here. Actually, they live here!

That's because, even though they have human-like names, Annie and Jeff are the nature center's painted turtles (Chrysemys picta.) 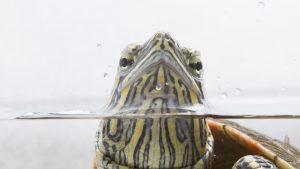 The shell of a painted turtle is made up of 13 bone plates, called scutes. When the turtle grows, it sheds the outside layer of its scutes and grows new plates underneath. Count the rings on the scutes and you'll know the age of your turtle!

Painted turtles are not male or female by genetics. Instead, their gender is determined by outside temperature while they are in their eggs. Colder temperatures produce males, while warmer temps ---usually above 84 degrees --- produce females. That means most eggs in a nest hatch as the same gender.

Painted turtles will come out of the water to spend time in the sun, called basking. This helps rid them of parasitic leeches. Annie and Jeff often sit on top of each other to bask, and this isn't unusual. Some researchers have seen up to 50 turtles on one log, stacked on top of each other.

People love to spot turtles in the wild. Snapping turtles, painted turtles, softshell turtles — it is so fun getting to see these truly unique creatures. Let’s celebrate turtles right at home by making a button turtle craft. You’ll need:A printed templateColored pencils, crayons or markersButtonsGlue Print out our button turtle template, and color it END_OF_DOCUMENT_TOKEN_TO_BE_REPLACED

We see many types of turtles roaming around northwest Iowa in the summertime, especially painted turtles and snapping turtles. But we don’t see any in the winter. Where do they all go? Painted turtles and snapping turtles spend their winters in lakes or ponds, living beneath the ice the forms. They survive because of a END_OF_DOCUMENT_TOKEN_TO_BE_REPLACED

Turtle or tortoise — they’re different creatures, but you can make this fun finger puppet into whichever you would like. Otherwise, you can use your imagination and make your own distinctive turtle! Make it pink. Make it sparkly. Make it your own. First, start off by printing off the free turtle finger puppet template onto END_OF_DOCUMENT_TOKEN_TO_BE_REPLACED

We had someone comment that Teddy the box turtle looked unhappy because he wasn’t in water. However, he’s a terrestrial turtle, so his kind lives the majority of their lives on land and not in the water. Yet, he isn’t a tortoise. Some people in Florida released tortoise hatchlings into the ocean. However, they aren’t END_OF_DOCUMENT_TOKEN_TO_BE_REPLACED

Shells, claws and tails — turtles can seem confusingly similar. However, if you know a few key differences to look for, you can soon confidently identify some common turtle species in Iowa. There are 13 turtle species known in Iowa, but we’re going to look at just five — Blanding’s turtles, painted turtles, red-eared sliders, END_OF_DOCUMENT_TOKEN_TO_BE_REPLACED

Teddy — named after conservationist former President Theodore Roosevelt — is an ornate box turtle. That means he is an omnivore and will eat both plants and animals, just like humans! See naturalist Ashley Hansen feed Teddy and learn what his favorite foods are in this video! You can also see more Teddy videos on END_OF_DOCUMENT_TOKEN_TO_BE_REPLACED