People often use the term bee when talking about any kind of buzzing creature outside --- it could be a honeybee, a bumble bee, a mason bee, a sweat bee or even a wasp or yellowjacket.

However, it's important to differentiate between the different kinds of bees. That may be difficult since the U.S. has about 4,000 species of native bees, but there are still several clear differences between native bee species and honeybees.

Wasps, hornets and yellow jackets are in a league of their own. As for honeybees and native bees, there are six key differences that we will discuss.

(It's not a bee --- 5 types of wasps, hornet and yellowjackets you may see in Iowa)

The European honeybee (Apis mellifera) originated in Europe --- or some say northern Africa --- and was only brought to North America by settlers. The vast majority of these bees are still domestic, although some have escaped and established wild colonies, called feral colonies.

Native bees are just that, native. These are bee populations that have always lived in North America, and like any insect or animal, they have certain places where they can be found. Of the approximately 4,000 native bees species in the United States, about 200 species are native to Iowa.

If you look up a photo of a bee, many are placed by hives. However, only a few species of bees actually live in colonies. These bees are called social bees. The vast majority of bee species live solitary lifestyles.

Honeybees are the quintessential social bee, living and working as a group. Bumble bees are the only bees native to the U.S. that are social. However, honeybees live in colonies year-round, whereas a bumble bee colony is seasonal. At the end of summer, only the fertilized queen bee will hibernate through the winter, and she will lay eggs to start a new hive. 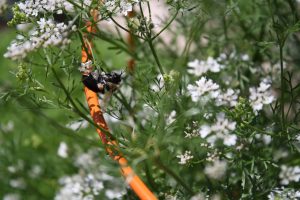 The vast majority of native bees then are solitary. They will get together to mate and then will separate again. The female will lay her eggs, provide enough food for the larva to eat when it hatches and will then leave her offspring alone.

(Learn more about native bees from the Xerces Society.)

Honeybees live in hives filled with honeycomb that is used to house brood cells as well as honey and pollen for food. Bumble bees live in colonies in cavities found in hollow trees, walls or underground.

Solitary bees build their own nests, specifically for laying eggs. Some native bees nest underground, and they need bare patches of ground where they can dig. That's why it's so important to not mulch every inch of your garden. Leave some bare ground so these tiny pollinators have a place to nest. 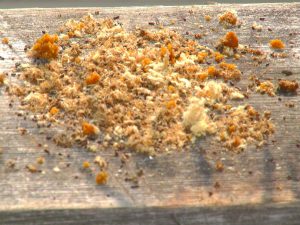 There is one type of bee that does not build a nest though. Cuckoo bees parasitize the nests of other bees, either killing the host's larva before laying eggs or laying an egg that after hatching will eat the host's food and/or larva.

Because honeybees have a hive to protect, the worker bees have stingers. They use these stingers as a last resort, because they die after stinging, when they feel threatened.

However, most solitary bees don't have a hive to protect, so they very rarely would sting a human. Even if they did try, some native bees are so tiny that their stingers are too small and weak to even penetrate human skin.

Honeybees are considered generalists when it comes to foraging. They will gather pollen and nectar from any plant that is in bloom, which is one reason that honey comes in so many different flavors. The honey produced by honeybees changes dependent on which flowers the bees used for foraging.

Some native bees are also generalists, but many are called specialists, because they need a certain plant or family of plants to forage from. Usually, these bees' hatching schedule coincides with when their host flowers are in bloom. Some examples of specialists are squash bees --- foraging on squash, pumpkins and zucchini, blueberry bees and cactus bees.

Although we usually think of bees having black and yellow stripes, like honeybees, and flies as being bright and metallic, many native bees have vibrant coloring.

Native bees can be dark brown, black, metallic green or blue or striped with red, white, orange or yellow. Sweat bees, of the family Halictidae, are some of the most colorful with shades of blue, copper and gold.

So, next time you're thinking about bees, take a moment to stop and realize that there are a whole lot of bees out there. Each is different, has its own social habits, has its own vibrant beauty and has its own merits.

1. How long does a honeybee live? How long does a queen live? A worker bee typically lives six weeks during the summer, and during that time it has a variety of different jobs — nurse, undertaker, architect, cleaner, attendant, guard, forager. (Read more about worker bee jobs here.) However, worker bees that live in END_OF_DOCUMENT_TOKEN_TO_BE_REPLACED

Do you love fruit? Then you love the blue orchard mason bee. Blue orchard mason bees (Osmia lignaria) are part of a family of bees that are solitary — meaning they live and breed individually instead of socially in a hive, like honeybees — and use clay to make partitions to their nests and to END_OF_DOCUMENT_TOKEN_TO_BE_REPLACED

One of our volunteers made coffee filter butterflies with her granddaughter, and in exchange, her granddaughter showed her how to make thumbprint bees. We thought they were so cute, we would try them ourselves. And just to make it more exciting, we did a variety of thumbprint invertebrates! All you’ll need is: White paper Washable END_OF_DOCUMENT_TOKEN_TO_BE_REPLACED

Mason bees might be the best pollinators of all bees. Instead of wetting pollen and putting it in pollen sacs like honeybees, mason bees are covered in hair that collects pollen as they move around, searching for nectar. They can certainly carry a lot of pollen and significant pollinators for apple, cherry and plum trees. (Try END_OF_DOCUMENT_TOKEN_TO_BE_REPLACED

You can help native bees by providing them a secure place to nest. What many call bee hotels or bee homes range from simple to deluxe designs. (Mason bees are amazing pollinators.) One way is to drill various-sized holes into a wooden block or tree cookie and hang it in a sheltered area. Another simple END_OF_DOCUMENT_TOKEN_TO_BE_REPLACED

If you didn’t have bad luck, you wouldn’t have any luck at all. Someone posted this about our osprey nest camera blowing down again this year. We feel kind of the same way. This poor camera has been blown down, hasn’t had enough sun, and when the camera did work last year the osprey chicks END_OF_DOCUMENT_TOKEN_TO_BE_REPLACED

Myth: Bees are mean. Truth: Bee are nice. Honeybees only sting as a last resort, because they die after stinging. That means, unless they feel threatened or think you are going to hurt the hive, they will leave you alone. Myth: Bees will keep stinging you. Truth: As stated above, honeybees will die after stinging END_OF_DOCUMENT_TOKEN_TO_BE_REPLACED

Save the Bees, Save the World

Save the bees, save the world. That seems like quite a stretch, but really, bees do so much more than people think. As our bee populations slowly decrease thanks to disease, loss of habitat, pesticide use and more, the nation and the world are starting to see the ramifications of these little insects. In the END_OF_DOCUMENT_TOKEN_TO_BE_REPLACED