A few more weeks and the monarch butterflies that are overwintering in Mexico will start making their way north. 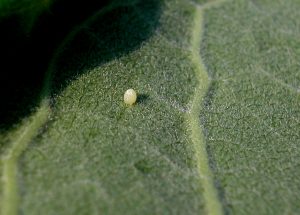 Photo by Bfpage, via Wikimedia Commons

Monarch eggs are yellow in color and are shaped like a football. They have a flat bottom attached to the milkweed leaf, usually on the underside of the leaf for safety, and then small ridges that lead up to a point.

The eggs are very small, only 1.2 mm tall and less than 1 mm wide. One millimeter is about the same width as the tip of a sharpened pencil --- that's tiny!

Monarch caterpillars hatch from eggs after three-five days, depending on the temperature. 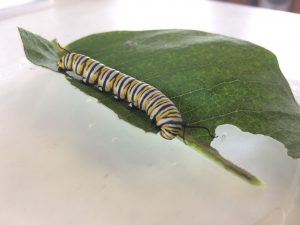 The larval stage of a monarch is called a caterpillar. When the caterpillar first hatches, it is 2-6 mm long. As it grows, it molts --- sheds its skin --- and ends up to be 25-45 mm when it is full grown. The time between molts are called instars, and monarch caterpillars go through several different instars, because they grow 2,700 times larger between hatching from an egg before turning into a chrysalis.

(See what milkweeds to plant to help monarchs.)

Before pupating, the caterpillar will use its spinnerets to spin a silk web from which it will hang upside down. The key is to look for a caterpillar hanging in the shape of a J, that means it is going to go into its chrysalis.

In chrysalis, the adult butterfly will develop for approximately 10-14 days. At the end of this metamorphosis, the chrysalis will turn black and then clear, as you're able to see the black and orange butterfly inside just before it hatches. 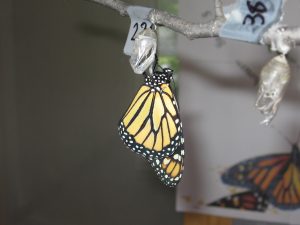 The adult butterfly will hatch and then hang as its crumpled wings unfurl and dry. You can see the butterfly pumping fluid into its brand new wings.

Once fully dry, the butterfly will begin to fly. It will find a mate, reproduce and the process starts all over again!

It can take four-six generations of monarch to make their way all the way to the northern most breeding grounds in the Midwest or southern Canada before the final generation migrates back south to Mexico for the winter.

(Test your monarch knowledge with this fun quiz!)

So when you see monarchs this spring, they are not the same monarchs that flew south last year. They are that monarch's great-great-grandchild at least!

(Read "How do monarchs find their way south?")

Most people familiar with monarch butterflies know that they migrate to central Mexico to overwinter. You can read in-depth how monarchs find their way here, but in general, they use their circadian rhythm to orient themselves with the direction of the sun and also use the earth’s magnetic field to fly toward the equator. However,…

A monarch butterfly chrysalis is usually a brilliant color spotted with golden dots. However, sometimes something goes wrong — and one day, we spotted a chrysalis that was beginning to turn brown. At the bottom of the container that the chrysalis was in inside of our monarch enclosure in Pollinator Paradise were three brown, egg-shaped…

During monarch tagging at Dee’s Bee & Butterfly Festival, taggers often get to choose whether they want to tag a male or a female monarch butterfly. Then the next question is, how do the staff helping with tagging know the difference? There are two very simple ways to tell apart a male and female monarch…

In the monarch enclosure and in the wild, we have come across monarch butterflies that hatch with crumpled wings. That is a sign that the butterfly is infected with ophyrocystis elektroscirrha, or OE. As if these butterflies didn’t have enough to deal with — like excessive pesticide use, their lack of habitat and native food…

It seems a little premature since there is snow on the ground and more in the forecast, but it’s the time of year that I start to think about planting my garden. One thing I’m really excited to plant in our landscaping are some native pollinator plants. When we moved to our house, it had…