We have a little snow outside, but sometimes that makes us hungry for even more snow. We want to play in the white stuff!

If you’re itching for some fun snow to play with, why not make your own?

To make your own snow slime, you’ll need just a couple of ingredients:

I found several recipes for slime and wanted to use things that people would normally have on hand at home. So, I first tried a recipe that included liquid starch. We didn’t have liquid starch at the Dickinson County Nature Center, so I made my own on the stovetop with cornstarch.

So, I started over and used a recipe that had just cornstarch, not liquid starch, in it. It didn’t come together either.

After an hour of tests, I tried this recipe and used some Borax that was in our lower level laboratory, and the slime can together instantly. So from what I’ve tried, I would use this recipe.

Start by dissolving the Borax in a cup of the water. Set aside. 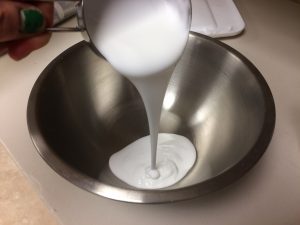 Pour glue into a mixing bowl and add sparkles. Stir together. Add the 1/2 cup of water that remains and mix until smooth. 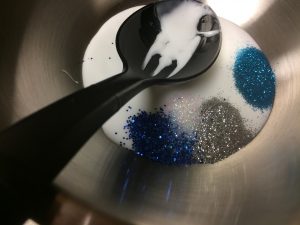 Pour the Borax mixture into the glue mixture and begin to mix with a spoon. As the slime comes together, stick your hand in and grab the slime. Continue to mix around with your hand until the slime comes out of the rest of the liquid. 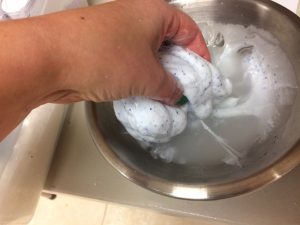 Drain the liquid and keep mushing the slime until it dries out a little.

You can mix it, mush it, mash it. Line up polar animals and pretend it’s snow in the Arctic. Stretch it out as far as it will go.

When you’re done, simply put it in a zip-top bag or airtight container to store indefinitely!

It’s a winter wonderland in Iowa, so we’re celebrating with a recycled snowman craft. Instead of tossing out your empty egg cartons, keep them around for fun crafts on an afternoon when the winter weather is pressing you in. (Check out instructions for an egg carton butterfly here). To make a snowman, you’ll need: -An END_OF_DOCUMENT_TOKEN_TO_BE_REPLACED

You’ve built snowmen. You’ve gone sledding. You’ve had snowball fights. Now, it’s still winter and you don’t know what else to do to have fun in the snow. So we have put together 10 activities that will make the everlasting snow a bit more fun! 1. Maple taffy I love historical fiction, and I grew END_OF_DOCUMENT_TOKEN_TO_BE_REPLACED

Add some color to your snowy world with ice balls

Our naturalists are incredibly creative, and it’s fun to watch their ideas take shape. For Nature Tots in January, Bryanna Kuhlman, our environmental education coordinator, and Ashley Hansen, our naturalist, put together snow activities that included snow volcanoes, snow painting and playing with ice balloons. If you’re looking for a way to make the snow END_OF_DOCUMENT_TOKEN_TO_BE_REPLACED

I will admit that my craft ideas don’t always turn out the way that I plan them. This craft was supposed to be called “snow dough,” but because I bought unbleached flour instead of bleached flour, it looks more like sand. I thought I might just play it off and say, “In case you’re missing END_OF_DOCUMENT_TOKEN_TO_BE_REPLACED

We’re in the middle of a blizzard in northwest Iowa. Look outside, and the white stuff looks like a blanket, like it’s all just one mass. But it’s not. In each cubic foot — that’s a box that is 1 foot on each side — there could be as many as 1 billion snowflakes. Use END_OF_DOCUMENT_TOKEN_TO_BE_REPLACED

It looks like snow is on its way this week, so we’re all going to be wondering how to have fun once we’ve done the obligational snow angels, sledding, snowball fights and tubing! One of our favorite ways to have fun in the snow is to let out some colorful creativity. As creative as you END_OF_DOCUMENT_TOKEN_TO_BE_REPLACED