My husband and I took a trip to Utah this summer.

We were enamored by the beautiful landscape, with red rocks rising out of sandy floors, hoodoos sprouting out of canyon lands, short scrub trees dotting desert landscapes.

During a drive through Zion National Park, we overheard a student on the bus say "I haven't seen this much green in three years."

This much green? There were relatively few trees in the giant canyons, and the grasses were sparse as well.

When we arrived back in Iowa and were driving home, we did start to notice just how much green was around us. Tallgrass prairie plots, corn fields, bright ditches and yards --- I guess I can see why people comment on how green Iowa is.

When we think of beautiful landscapes, Iowa is not usually the top state we think of. However, the closer you look, the more you do start to notice just how diverse and beautiful the state is.

Iowa actually has between seven and 10 different landform regions, depending on who you talk to, and each is more diverse and beautiful than the last. Take a drive across the state, and sometimes you'll think you've entered an entirely different area. 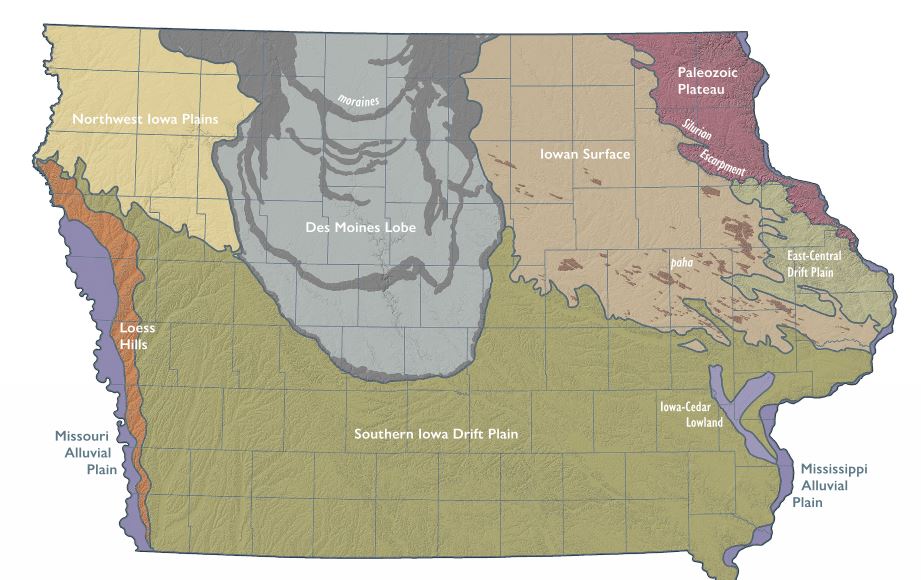 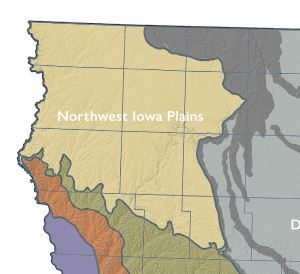 It is a largely treeless region that sits at the highest elevation in the state and has the lowest rainfall. It does have a branching network of streams and rivers that stretches out throughout the region, giving it good drainage.

Beneath the surface, northwest Iowa sits on a bed of glacial drift covered by a layer of windblown loess. Landforms of Iowa by Jean C. Prior says, "The mantle of silt generally thins in a southwest to northeast direction from about 16 feet in Plymouth County to 4 feet in Clay County."

The Iowa Great Lakes portion of Dickinson County resides in the Des Moines Lobe region of the state. Iowa's Natural Heritage, published by the Iowa Academy of Science and the Iowa Natural Heritage Foundation, calls this the Wisconsin Surface region. 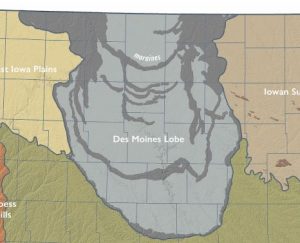 Continental glaciers helped affect much of Iowa's landscape, but the Des Moines Lobe was the last part of the state touched by glaciers, and you can still see actual shapes that resulted from these. The landscape lacks a cover of windblown silt, so the remnants of glacial movement has not been filled in and is still obvious.

For instance, large crevices within the ice became filled with deposits of sand and gravel when the glaciers melted, and those deposits remain as kames today. The Ocheyedan Mound is a glacial kame, as is the hill in Kenue Park.

(Learn about Kenue Park and its glacial kame.)

Nearly all of Iowa's natural lakes are found in the Des Moines Lobe, including East and West Lake Okoboji and Big Spirit Lake.

East of the Des Moines Lobe is the Iowan Surface region, which acts as a transition between woodlands to the east and the tallgrass prairie to the west. Compared to other regions around it, the Iowan Surface is considered rather subtle with long, rolling slopes and open views. 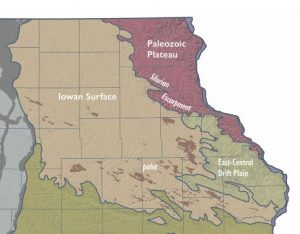 One interesting aspect of this region is the presence of glacial erratics, large boulders of rock typically found in Canada, Minnesota and Wisconsin that were dropped by melting glaciers and have withstood wind and soil erosion through the years.

Drive through northeast Iowa, and it's like you're in a different state. There are forests, caves and plants that aren't found anywhere else except in the Paleozoic Plateau, so named because it is the result of rock erosion in the Paleozoic age. 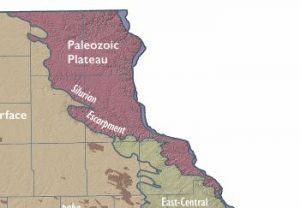 In geologic time, rocky deposits in the area hardened into more brittle rock and were broken by movement in the Earth's surface. Large cracks in the rock, called joints, create the blocky shapes and sheer cliff faces that are seen along roadways in the region. Springs are commonly found along steep valley sides where erosion has intersected with groundwater.

Rivers, such as the Mississippi and Missouri that border Iowa, created flat-floored corridors called alluvials. These are constructed by the debris and sediment that the water carries and then leaves behind as it slows in certain areas.

There are other alluvial plains in Iowa, but the two bordering the major rivers in the state stand out on topographic maps.

Iowa's Natural Heritage also splits apart part of the Mississippi Alluvial region into Sandy Provinces. "Scattered throughout Iowa are areas of pure sand, deposited by stream action..." Unusual species of plants and animals, such as the ornate box turtle, hognose snake and lark sparrow are found in these areas. Landforms of Iowa calls this area Iowa-Cedar Lowland.

One of the state's most distinctive and well-known landscape regions is the Loess Hills area in western Iowa. They are composed of gritty sediment known as loess, the German word for loose or crumbly.

Loess is a type of windblown silt, usually quartz. It is found covering thousands of square miles in the Midwest as well as in central Europe, Russia and northern China. The Loess Hills is simply a thick enough deposit to cover the surface and even form its own landscape.

The thickness of loess in the Loess Hills is usually at least 60 feet, with depths of 150-200 feet having been recorded in certain areas.

The largest of Iowa's landform regions, this was created by glaciers but their remains --- kames, kettles, and the like --- have been covered up through time. The only identifying factor is that 10 to hundreds of feet of glacial drift covers bedrock.

This area has rolling hills, most of which slope toward a river or stream or another type of drainage. Erosion and windblown loess have also contributed to the sprawling landscape.

Iowa's Natural Heritage specifies Riverine Systems as another landform, Landforms of Iowa does not. These are deep valleys formed by major rivers that are wooded and moist. Many animals make their homes in these areas.

We hear it from friends and family that live out-of-state, on TV shows that happen to mention Iowa or the Midwest --- "That's flyover country." What they mean is, no one cares. It's not pretty. Why would we visit there?

But Iowa is beautiful. It has rolling hills, majestic rock faces, hidden caves, flowing rivers. If we tune our eyes to its subtleties, we'll also see its beauty.

(For a more detailed description of Iowa's landforms, check out Landforms of Iowa by Jean C. Prior.)

Rocks are continuously changing. Temperature, weathering through rain or wind,  pressure — rocks move through a cycle back and forth, back and forth. Let’s take a look at the different types of forms rocks can be found in: Igneous Igneous rocks are formed through the cooling and solidification of magma, or lava. The atoms and END_OF_DOCUMENT_TOKEN_TO_BE_REPLACED

Native prairie plants make wonderful habitat for wildlife like voles, turkeys, rabbits, ground squirrels, hawks and foxes. They provide both habitat and food sources for tiny creatures such as monarch butterflies, bumblebees and milkweed beetles. They are beautiful to look at. However, they are also important in a way that we can’t see. Deep down END_OF_DOCUMENT_TOKEN_TO_BE_REPLACED

Bog, marsh, swamp, fen. Often these words are used interchangeably, but in reality, each is its own type of wetland, which is a word used to refer to water-saturated landscapes. (Watch: What is a wetland?) A marsh is a wetland that is continually full of water. If you have been to the Florida Everglades, then END_OF_DOCUMENT_TOKEN_TO_BE_REPLACED

Walking along the glacial landmark tour inside the entrance of the Dickinson County Nature Center, visitors can to experience replicas of many of the places created by the Des Moines Lobe of the Wisconsin Glacier when it was in the county about 12,000 years ago. From bouncing on a fen to climbing a miniature kame END_OF_DOCUMENT_TOKEN_TO_BE_REPLACED

I (Kiley) know I made this exhibit at the Dickinson County Nature Center, but this might be the most boring thing I’ve ever written. Thirty-six inches down in our soil, you will find loam which is characterized by common, fine, distinct brownish yellow mottles, a weak fine prismatic structure…yikes. It continues but I won’t bore END_OF_DOCUMENT_TOKEN_TO_BE_REPLACED