When kids who have been to the nature center before return, many of them beeline to see Teddy the ornate box turtle.

(Teddy has some lessons for us to learn in this video.)

But how much do you really know about the ornate box turtle (terrapene ornata ornata)? 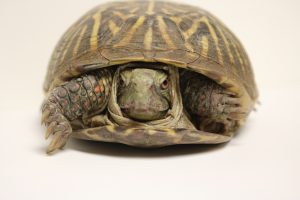 opens IMAGE file Long live Teddy. Ornate box turtles have an average lifespan of 25 years in the wild, but some have been reported to live up to 50 years! We aren't sure exactly how old Teddy is because he was a pet that was donated to us when the owners could no longer keep him. Born and raised in captivity, ornate box turtles have the same lifespan as wild turtles.

(See how we feed Teddy in this video. Click here.)

Sorry, we're closed. Most turtles can tuck in their head, legs and tail to protect themselves inside their shell, but the ornate box turtle can do even better. It has a special hinge in the lower half of its shell that lets it bend upward, completely closing off its body from predator attacks. Blanding's turtles are the only other Iowa species that can do this! 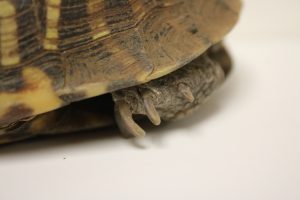 Introvert. An introverted person enjoys being alone, and Teddy is a pretty introverted turtle. Box turtles are solitary animals and do not interact with each other except when it is time to mate.

(Read our fun story about Teddy looking for a friend.)

Not very motherly. Since ornate box turtles are so solitary, that even extends to motherhood. A female will lay eggs two hours after sunrise or two hours before sunset in a nest built in sandy soil, just underneath rocks or vegetation. Then she leaves and does not return. That means many young die after hatching.

Whatever floats your boat. If an ornate box turtle does end up in deep water by accident, it can still swim well. They have fat deposits under their shells that makes them float. In fact, they are actually hard to submerge. Don't place a box turtle in deep water as an experiment though. They can still drown, and we never would want to harm an animal! 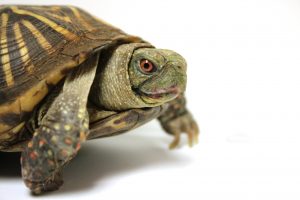 Ornate box turtles are common pets, but it is not legal to capture or kill them in Iowa because they are considered threatened in the state. They are only legal pets when purchased from a certified pet store.