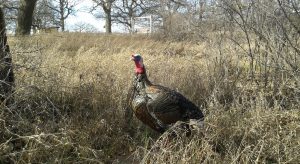 If you want to be the stand-out at Thanksgiving, bring these 10 turkey facts with you.

Soy de Mexico. All turkeys originated in Mexico. Now it imports about 400 million pounds of turkey from the U.S. for consumption.

They were wanted for their feathers. Wild turkeys can have a wing span --- their wings stretch out to --- almost five feet. It was their beautiful feathers that made people want to domesticate them. Domesticate means to tame a wild animal to keep it as a pet or for farm produce. Turkeys were first domesticated in Mexico about 800 B.C. and were kept on farms for their feathers, not for their meat. They didn't become a large food source for American Indians until 1100 A.D.

Turkeys can swim. When they need to, they will tuck in their wings, spread out of their tail and kick their legs.

The chick's name is literally "young fowl." Creative. A baby turkey is called a poult, from the Middle English word polet or pulte, which meant young fowl.

They change colors. The turkey head is normally grayish blue, but the skin of a male's head and neck can turn deep red or purplish when they want to breed or are feeling aggressive. The blood goes to their head, like when a person gets flushed when excited or mad.

Populations have recovered. Due to its popularity as a food in the U.S., wild turkeys were overhunted, and they were almost extirpated --- extinct in a region --- from Iowa by 1900. Conservation efforts brought them back, and they now occur in every state except Alaska.

They're lazy nest-makers. A female turkey scratches a shallow depression in the soil, about 1 inch deep and uses only the dead leaves or plant materials already at her nesting site. She doesn't go out and find any more material than is already there.

Females don't gobble. The classic gobble-gobble-gobble sound of the turkey is only made by males, and it's their version of a rooster's crow. It is used to attract females and to respond to other males. So if you hear the classic turkey sound, you're hearing a male.

They have a lot of feathers. Each turkey has more than about 3,500 feathers when it is an adult.

Peering out the window of the Dickinson County Nature Center, I can see birds at the feeders in the avian courtyard. One of them is a brilliant yellow color with black wings, and it is right at home here. That’s because the American goldfinch is the state bird of Iowa. Did you know that Iowa END_OF_DOCUMENT_TOKEN_TO_BE_REPLACED

Every Thanksgiving, our naturalists speak at Harris-Lake Park Elementary for a grandparent program, and this year, our environmental education coordinator Bryanna Kuhlman discussed what animals are thankful for. I thought her topic was so creative that I decided to share her ideas with you. Many of the things animals are thankful for are what humans END_OF_DOCUMENT_TOKEN_TO_BE_REPLACED

To go along with our blog about turkeys this week (read it here), we thought we might as well make a turkey-themed nature craft too. You will just need a few supplies: Turkey template printed on white paper (Find the template here) Leaves White computer paper Crayons Scissors Glue Begin with a trek outside. Pick END_OF_DOCUMENT_TOKEN_TO_BE_REPLACED

Turkeys are odd-looking creatures. With their bumpy red heads, hanging flaps of skin around their faces and large tails, wild turkeys are quite a sight. The odd parts of their bodies also have interesting names and purposes. Let’s look at some of the body parts that make a turkey unique. What’s a snood? The snood END_OF_DOCUMENT_TOKEN_TO_BE_REPLACED

Crafts don’t always come together the way you think they will. I had a brilliant idea this morning to make place cards with leaf etchings on them, and I tried it out. Yikes. Ugly. If you come up with something pretty with that idea, let me know. So instead, I decided to post how to END_OF_DOCUMENT_TOKEN_TO_BE_REPLACED