Why do snakes stick out their tongues at you?

Have you ever seen this? You've been looking at one of the snake animal ambassadors at the nature center, and one of them sticks out her black tongue and flicks it around.

She is smelling you!

The snake's tongue has a fork on the end of it, because it captures little pieces of smell --- odor particles --- that are floating in the air. The fork in the tongue that holds this smelly air is brought back into the snake's mouth and pressed against the roof of the mouth.

The air particles that are pressed into the two pits in the roof of the mouth have information that is sent into the Jacobson's organ. This special organ reads the information about the air's scent and then sends that information to the snake's brain. 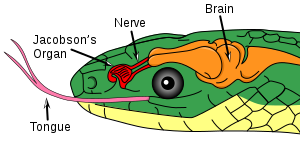 That is how a snake's tongue is used to smell!

Snakes also have nostrils on top of their heads to smell and their noses work with the scents collected by the Jacobson's organ. This makes a snake's sense of smell superpowered compared to you or me.

(See a National Geographic video about the Jacobson's organ here.)

Cats also have a Jacobson's organ, and they often use it to read messages in pheromones --- scent chemicals --- from other cats, especially those found in urine. Those scent chemicals are often a way for cats to mark what is their territory or to see if a female is ready to mate.

You can tell a cat is using this sense of smell instead of its nose when it curls its upper lip and keeps its mouth partially open while it flicks its tongue out.

The Jacobson's organ is also found in other lizards, some salamanders and other mammals.

Iowa has 28 different species of snakes, including four venomous species. (Read about the venomous snakes of Iowa here.) Most people are familiar with the garter snake, a common type of non-venomous snake, which are harmless to humans. Let’s take a look at the two kinds of garter snakes that are native to Iowa: Plains END_OF_DOCUMENT_TOKEN_TO_BE_REPLACED

Just because they work for a conservation board doesn’t mean that naturalists know everything. Just last week, naturalist Ashley Hansen was feeding Rosie the corn snake when she noticed a hole open up in the snake’s mouth while it was eating a mouse — the Dickinson County Nature Center snakes are fed mice that are END_OF_DOCUMENT_TOKEN_TO_BE_REPLACED

“Does Iowa have any poisonous snakes?” It’s a question that comes up when visitors see our animal ambassador snakes, and the answer is “No.” That might not be what you expected. You see, snakes in North American are not poisonous, they are venomous — which means they inject a toxin rather than secreting a poison END_OF_DOCUMENT_TOKEN_TO_BE_REPLACED

If you find a snakeskin in the wild, it’s usually inside out! When it sheds, it slithers out of its old skin, like pulling a sock off your foot, so it ends up inside out! Watch the video for more information on how and why snakes shed their skin. Check out more of our animal END_OF_DOCUMENT_TOKEN_TO_BE_REPLACED

Since this week’s blog post was about how snakes slither, I thought it only appropriate that this week’s craft also be snake related. I will pretty much guarantee that after you make this fun wrist cuff that your child will not take it off for the entire day. Or at least the next five minutes, END_OF_DOCUMENT_TOKEN_TO_BE_REPLACED

Besides their forked tongues, probably the main thing that creeps people out about snakes is their ability to move without legs or feet. (The reason a snake sticks out its tongue, and why it’s forked.) I have to say, before I started working at the Dickinson County Nature Center, back when I was still petrified END_OF_DOCUMENT_TOKEN_TO_BE_REPLACED