We received a Facebook message the other day with a question about a plant with a tiny green berry that smelled like a tomato and looked like a tomato when it was cut open. 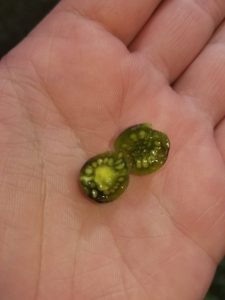 Black nightshade (Solanum ptycanthum) is in the nightshade family, which also includes tomatoes and potatoes, and is a common plant in Iowa woodlands.

It produces white, star-shaped flowers, sometimes tinged with purple, and small, round berries that are considered toxic when green. They are a dark purple when ripe and are about the size of a pea or blueberry.

A variety of animals eat the mature fruit of the plant, and many foragers think it would be fine for humans to eat the dark berries as well, although it can be a controversial topic. Animals that eat the fruit, according to Illinois Wildflowers, include the ruffed grouse, wild turkey, eastern meadowlark, gray catbird and swamp sparrow as well as raccoon, striped skunk, white-tailed deer and rodents. The seeds survive the digestive tract and are deposited in places other than woodlands, often ending up in gardens and landscaping. 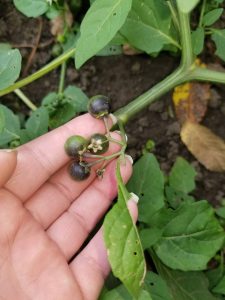 The controversy about nightshade's toxicity seems to come about because it has been used animal fodder in smaller quantities, and the production of the alkaloid solanum may vary with climate, season and soil type, according to an article I read from Root Simple or from Foragers Harvest.opens PDF file

Nightshade can be a confusing plant, because the common names of the many different species are often lumped under "nightshade" or "black nightshade." It is found around the world, from Solanum nigrum, S. americanum, S. ptychanthum, S. douglasii and other closely allied species.

Read more about why S. ptychanthum was found to the Midwestern species from University of Wisconsin Extension.

The positive is, nightshade is a relatively easy plant to pull from your garden or landscaping, no matter the species.

Wild parsnip — not as new as you might think